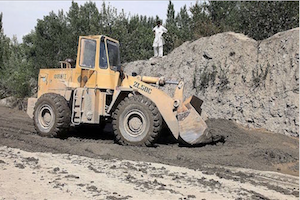 BACKGROUND: Afghanistan’s rich mineral base has been known for decades. Following the December 1979 Soviet invasion, extensive Soviet exploration produced detailed geological maps and reports that listed more than 1,400 mineral outcroppings, along with about 70 commercially viable deposits. The USSR subsequently committed more than US$ 650 million for resource exploration and development in Afghanistan, which included a smelting complex for the untouched Mes Aynak copper ore deposit that, after becoming operational, would eventually produce 1.5 million tons of copper per year. In the wake of the Soviet withdrawal optimism remained about the eventual development of the deposit; a subsequent World Bank analysis projected that the Mes Aynak copper production alone could eventually capture as much as 2 percent of the annual world market.

A second substantial ore site revealed by the Soviet surveys and subsequently confirmed was the Hajigak iron deposit in the Hindu Kush mountain range west of Kabul in Bamiyan Province. This is Asia’s largest untapped iron ore reserve, assessed as one of the largest high-grade deposits in the world, which contains an estimated 1,800 million tons (Mt) of iron ore at a grade of 62 percent iron.

Interest in Afghanistan’s mineralogical deposits continued after the 1989 Soviet withdrawal and the 2001 U.S.-led invasion 12 years later that displaced the Taliban from power. International foreign investment interest in the landlocked country’s mineralogical potential intensified after the release of a 2010 joint report by the Pentagon, the U.S. Geological Survey and U.S. Agency for International Development, stating that Afghanistan possessed “previously unknown” and untapped mineral reserves worth up to US$ 1 trillion, a potential windfall in a country where two-thirds of the population live on less than US$ 2 a day. The report pointed out that foreign investor caution was not for a lack of effort on Kabul’s part as “the Government also issued … tenders for oil and gas exploration in 2010” before adding that “The nearby Afghan-Tajik Basin could hold as much as 1.5 billion barrels of crude oil.”

The report generated cautious interest in the international investment community along with wildly unfounded optimism in the Afghan government; for Mes Aynak alone, Afghanistan’s Minister of Mines Mohammad Ibrahim Adel stated that he expected the mine to bring the government US$ 400 million annually in fees and taxes in addition to a US$ 800 million down payment from the developer. By 2017, the optimism had been largely replaced by a growing awareness of the difficulties surrounding large-scale infrastructure investment in Afghanistan.

IMPLICATIONS: The two countries most heavily invested in developing Afghanistan’s mineral base are neighboring China and India, China focusing on Mes Aynak and India on Hajigak. Both signed contracts with the Afghan government, China in 2007 for Mes Aynak and India four years later for Hajigak but little has been accomplished at either site up to now, the primary reason being a relative lack of security provided by the government at either site.

Seven years after the Mes Aynak contract was awarded to the Metallurgical Corporation of China (MCC), so little progress had been made that members of Afghanistan’s lower house of parliament in November 2014 urged the government to advance plans to exploit Mes Aynak in order to increase revenues and make good on economic potential that was squandered by corruption and insecurity under the previous government. The calls came even as none of the commitments had been implemented and MCC signaled its intentions to pull out of the contract, which it said was no longer acceptable.

Worse news for the Afghan government was to follow. In May 2015, rising nervousness over the proposed US$ 10.8 billion steel Hajigak iron ore mine project caused the Steel Authority of India Ltd (SAIL)-led consortium of leading Indian steelmakers to decide to scrap the project altogether after an inter-ministerial group concluded that it would not be prudent to pursue it.

In developing Afghanistan’s mineralogical riches, however, a wide discrepancy exists between the easily exploitable, low-volume high-value material such as lapis lazuli and marble, which require little in the way of infrastructure, and the more diffuse elements such as gold, copper and iron, which require an expensive infrastructure to extract and process from low-density ore. At the same time as Trump was announcing his troop increase, the deputy general manager of Qin Gen Industrial Company of China, Li Yingjun, headed a delegation to Kabul to investigate business opportunities there and told reporters, “the two countries’ leaders have agreed on mining of up to 42 types of Afghan marbles, quality production and export to China.” As for logistics issues, the first-ever cargo train from China arrived in Afghanistan’s northern border town of Hairatan in September 2016 after crossing several Central Asian states, and was hailed by Afghans as a step towards eventual Sino-Afghan railway connectivity.

The easily reachable and exploitable mineral deposits have also attracted the attention of the Taliban. Last year the international NGO Global Witness released a study detailing how Afghanistan’s 6,500 year-old lapis lazuli mines in the country’s restive northern Badakhshan region, the world’s main source of the brilliant blue semiprecious stone used in jewelry, is providing the Taliban and other armed groups up to US$ 20 million dollars annually, causing the NGO to note that lapis lazuli stones should now be classified as a “conflict mineral.” Ironically, the Chinese market is a key driver for Afghan lapis mining, with the vast majority of lapis being exported to China where it is prized as jewelry. Chinese lapis sales therefore de facto fund the Taliban, a stark contrast to the Chinese government’s official position as a peace-broker in Afghanistan in regional security talks.

Most worrying for the central government, the insurgency’s involvement in the illicit minerals trade and its profits continues to rise. In February 2017 the Afghanistan Anti-Corruption Network (AACN) released a report noting that armed insurgents, including Taliban militants and jihadis of the terrorist organization known as the Islamic State (IS) gained US$ 46 million in 2016 through illegal extraction of minerals and their export from eastern Nangarhar province’s Khogyani district alone. According to AACN member Zabihullah Wardak, illegal extraction of minerals by criminal elements and militants across the country is occurring in the provinces of Badakhshan, Khost, Logar, Wardak, Smanagan, Panjshir, and even Kabul province, where the country’s capital is situated. Combined with profits from the drug trade, the revenue from mineral exploitation virtually ensures insurgents a substantial financial base for their activities for the foreseeable future.

CONCLUSIONS: In July, U.S. President Donald Trump reportedly said during a White House meeting that the U.S. should “demand a share” of Afghanistan’s minerals for helping its government in the war and in its reconstruction efforts. In the interim, the Afghan government wistfully ponders the fate of its mineral, oil and gas deposits, which could provide the government with over US$ 2 billion in revenue a year if developed. But in Afghanistan, as everywhere else, major investment flows will occur only after security is established, and it remains to be seen if Trump’s recently announced troop surge will provide sufficient stability to calm the nerves of international investors in a country still racked by armed conflict after 38 years. In the interim, most of Afghanistan’s mineralogical riches will remain where they are: underground, leaving the U.S. government and taxpayers to fund the Afghan government “in the war and in its reconstruction efforts.”

More in this category: « Abkhazia's Diplomacy: Foreign Relations Beyond Russia Armenia's Rapprochement with the West Raises Premature Optimism »
back to top