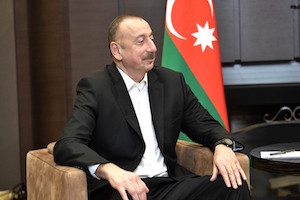 BACKGROUND: A Partnership and Cooperation Agreement (PCA), signed in 1996, was the cornerstone of the relationship between Azerbaijan and the EU for more than a decade. In 2009, as a reaction to the conflict between Georgia and Russia, the EU reevaluated its eastern neighborhood policy and initiated the Eastern Partnership project. Along with two other South Caucasus states, Azerbaijan was included in the partnership instrument. EU officials urged the partners to sign Association Agreements, however, Azerbaijan found the conditions of the agreement to be overly restrictive and refused to proceed with the negotiations. First, Azerbaijan believed that the agreement contradicted the country’s multi-vector approach to foreign policy and could anger Moscow. Therefore, the format of the agreement was modified into a Modernization Partnership similar to the EU-Russia Partnership for Modernization.

This agreement was not legally binding, aimed to push political and economic reforms and focused on the issues of democracy, energy and security. However, Baku stalled negotiations when the EU demanded a stop to crackdowns and violations of civil rights, while the EU also showed passivity in the Nagorno-Karabakh resolution process. Similarly, Azerbaijan’s delegation was hesitant to sign the Riga Declaration in 2015 due to the specific wording of the section on the Nagorno-Karabakh conflict. Only after lengthy discussions was the section changed and all participants signed the declaration.

This breakdown can be seen as another symptom of the dysfunctional relationship between Brussels and Baku. The main reason for these problems was a divergence of the perspectives and goals of the two parties. Brussels saw Azerbaijan as another post-Soviet state that, with the help of the partnership agreement, needed to be reformed through “European” rule of law, democracy, and human rights. Meanwhile, Azerbaijan had gained confidence through its petrodollars, considered itself as a player equal to the EU and aspired to build a strategic partnership.

Thus, in 2015 Azerbaijan submitted a draft Strategic Partnership Agreement to the European Commission. After more than a year of hesitation from EU authorities and slight concessions from Azerbaijan’s government, which released several well-known political prisoners, the European Council in November 2016 approved a mandate for the European Commission and the high representative for foreign affairs and security policy to initiate a comprehensive agreement with Azerbaijan.

Several rounds of negotiations have been held since February 2017. Each set of meetings is dedicated to four dimensions: policy, security, economy and investment. Although this agreement will not expand the conditions of the one previously negotiated, it will definitely include a separate chapter on a trade regime because, in contrast to Kazakhstan, Azerbaijan is not a member of the World Trade Organization and does not adhere to its regulations and tariffs.

IMPLICATIONS: Since the Riga Summit, geopolitical realities in the region have changed. These have acted to strengthen Azerbaijan’s intentions and forced the EU to speed up the negotiation process. The EU faced a requirement to restructure its approach to the Eastern Partnership to deal with a treat to its external influence and avoid losing valuable eastern partners.

Therefore, it recognized that not all partners aspire to EU rules and standards. This principle was documented in a review of the European Neighborhood Policy after the unsuccessful Riga summit. Therefore, the EU authorities understood that normative preaching on democracy and human rights could act to further damage their already fragile leverage in the region.

The construction of the Trans Adriatic Pipeline (TAP) is coming to an end in 2018, and Russian energy giant Gazprom has expressed an interest in linking a second line of the Turkish Stream gas pipeline to TAP’s route. TAP is designed to reach a delivery capacity of 20 billion cubic meters (bcm) per year, of which 50 percent will be fueled by Azerbaijan’s gas reserves from the Shah-Deniz field. Under EU legislation, another 10 bcm is open for commercial booking and Gazprom could potentially deliver the required capacity through the second line of Turkish Stream.

Azerbaijan saw tremendous economic turbulence after the oil price bubble burst and is highly interested in becoming the sole gas exporter to Greece and Bulgaria through the South Gas Corridor. Thus Azerbaijani authorities face serious competition from Gazprom, which has a vast amount of resources ready to export under its sleeve. Likewise, the EU is desperate to decrease its dependence on Russian gas exports particularly in Greece and Bulgaria. Ever since Syriza rose to power, EU officials are concerned that there is a potential danger of Greece turning into a source of internal Russian influence in the union. For instance, Greek and Italian energy companies have already signed a Memorandum of Understanding (MoU) with Gazprom on delivering natural gas through the Interconnector Turkey-Greece-Italy (ITGI) and Poseidon pipelines from Russia to Greece and Southern Europe.

Greek and Bulgarian authorities are well-known to advocate Russia in the EU institutions and have established strong informal ties to the Kremlin. Therefore, decreasing the dependency of Bulgaria and Greece on Russian gas is one of the reasons that drive the EU closer to Azerbaijan and make the negotiations on the new trade and partnership agreement so crucial. Besides, it is important to remember that TANAP/TAP could further include exports from hydrocarbon-rich Central Asian countries, which would be undermined by Gazprom joining the project.

Although both parties are quite optimistic that they will reach a draft agreement by the next Eastern Partnership summit, certain obstacles could cause serious setbacks. First, Azerbaijani authorities will have to commit to the business and economic reforms actively pushed by the EU. If these reforms are implemented, they could damage the interests of oligarchs that hold sway over key sectors of the economy. However, the appointment of a new vice president and restructuring of the administration signifies the emergence of a new agenda and a shift in the internal power struggles between the old oligarchic group and a more open and Western-oriented elite group. In addition, after the EU’s successful completion of a new framework agreement with Armenia, Azerbaijani authorities feel more entitled to be flexible during negotiations in order not to lose the opportunity to strengthen bilateral ties with the EU.

Second, the European Parliament recently issued a resolution condemning the abduction of an Azerbaijani journalist from Georgia. Therefore, the EU’s concerns regarding governance issues and civil rights matters complicate the context of the discussions. A third possible challenge will presumably be the wording on the Nagorno-Karabakh conflict. The phrasing depends on the terminology already used in the EU-Armenia agreement, which has not yet been made public.

CONCLUSIONS: The intense interest from Russia’s energy companies in the TAP/TANAP pipelines has made both Azerbaijan and the EU more cognizant of the dangers inherent in failing to implement the EU’s energy security strategy. Both sides understand that only a custom tailored cooperation agreement will serve to save the EU from external Russian pressure. In addition, the changing structure of Azerbaijan’s informal administration will probably lead to a more flexible approach from the country’s authorities. With regular meetings, the discussion could lead to a beneficial compromise amidst sticking points such as the Nagorno-Karabakh conflict and human rights violations. Indeed, a finalized agreement would most probably change the geopolitical climate in the South Caucasus.

AUTHOR’S BIO: Surayya Mammadova holds a Master’s degree in Global Political Economy from the University of Kassel. She published “The Oil Boom and Human Capital Development in Azerbaijan: “Turning Black Gold into Human Gold” in the Caucasus Analytical Digest (CAD).

More in this category: « What Drives Russo-Pakistan Relations and Where Are They Going? Homegrown Insurgency is on the Rise in Ingushetia »
back to top