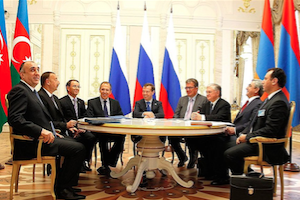 BACKGROUND: Since the April skirmishes between Azerbaijani and Armenian armed forces along the line of contact in Nagorno-Karabakh (NK), two bilateral meetings have taken place: one in Vienna on May 16 at the West’s initiative, and one in St. Petersburg under Moscow’s auspices on June 20. The post-St. Petersburg process has created the impression that Moscow has “monopolized” the negotiation process. But in fact, it was in the interests of the Minsk Group’s Western Co-Chair countries to let Russia take this role and inform them of the results, while dedicating themselves to technical processes for violence prevention mechanisms along the line of contact.

Moscow’s active role suggests the possibility of restoring the trilateral format led by Putin’s predecessor Dmitri Medvedev during 2008-2012. However, the usefulness of the current trilateralism appears limited from Moscow’s perspective; Russian officials, especially Vladimir Putin, have shown little personal interest in arranging trilateral meetings. During Putin’s third term, only two such meetings were organized, in August 2014 and June 2016, both times in Sochi. The only real background work seems to be done by the Foreign Minister. The failure to use this small window of opportunity to reach a deal quickly risks turning the Moscow-led process into a status quo format, reducing the peace process to rare meetings between presidents, and a process guided by interventions in moments of crisis.

IMPLICATIONS: After April, two processes have evolved, which became more visible after the St. Petersburg meeting of the Azerbaijani and Armenian presidents. The Minsk Group Co-Chairs are focused on creating an investigation mechanism for ceasefire violations. This mechanism has long been a source of controversy, but Armenia is now insisting that it should be implemented as a first requirement for the continuation of official negotiations.

The problem, however, is that the investigation mechanism – which focuses on violence prevention – lacks any confidence building measures, which are urgently needed. In October 2015, an initiative proposed by two U.S. congressmen and later endorsed by the State Department and the U.S. Minsk Group Co-Chair, recommended the placement of OSCE-monitored, advanced gunfire locator system and sound-ranging equipment, with increased capacity of OSCE monitoring missions. This proposal is in the interest of the Minsk Group’s Western Co-Chairs, because it could minimize the violence along the Line of Contact, and the subsequent prolongation of the status-quo without violence could deflect criticism of the Minsk Group’s activities in conflict resolution. But without the necessary confidence building steps, nothing will really change between the conflicting sides.

Another problem is that the conflicting sides have different views on the mechanism, making it another deadlock issue, rather than a helpful initiative. Azerbaijan rejects the implementation of these mechanisms at this stage because it will help consolidate the status quo. Azerbaijani authorities therefore argue that it is necessary to ensure that Armenian troops withdraw from the regions surrounding NK, and that there will then be no need for this mechanism. The de-occupation of some Azerbaijani territories will entail a new requirement, namely an international peacekeeping mission. The OSCE Minsk Group is considering expanding the office of the Personal Representative of the OSCE Chairperson-in-Office, which would increase the number of staff without expanding the authority of the mission.

At this stage, confidence building measures could build trust among the societies, reassuring them that the peace negotiations are being handled correctly. The only human dimension mechanism mentioned in the Vienna Declaration was the continued exchange of data on missing persons under the auspices of the International Committee of the Red Cross (ICRC). However the ICRC’s work is undermined by their lack of authority and influence on decision-making, and can only serve as a messenger for captives. This has been observed in recent years, when the Azerbaijani government sought the release of prisoners – including two Azerbaijanis (Dilgam Asgarov and Shahbaz Guliyev) who have been in jail for more than two years, a source of significant public anger in Azerbaijan. The Azerbaijani side has repeatedly called for a prisoner swap, to no effect. Therefore, the OSCE’s Moscow Mechanism should be implemented, whereby the participating states can establish an ad hoc mission of independent experts to assist in the resolution of a specific human dimension problem. This could be a useful confidence building measure. Backed by OSCE Minsk Group countries, this kind of mission could support the ICRC’s work on the ground while also solving other problems related to captives and missing persons.

The post-April period has witnessed a Moscow-led negotiation mission between Azerbaijan and Armenia. After the May 16 Vienna meeting, it was expected that the next set of talks would be held in a Western capital, likely Paris. However, the Russian authorities organized a meeting in St. Petersburg in the meantime. The explanation for this sudden move is that Armenia was against holding another meeting after Vienna without the implementation of a solid investigative mechanism. Moscow was able to convince Yerevan to attend a meeting where other Western states had not succeeded.

After the St. Petersburg meeting, the only visible developments are Russian Foreign Minister Sergey Lavrov’s shuttle diplomacy between Azerbaijan and Armenia, and the two sides’ statements on the fruitfulness of the meetings. Azerbaijani authorities expect the return of five occupied territories in the first stage of conflict resolution, and that the second stage will encompass the de-occupation of Lachin and Kalbajar and an agreement on the status of NK. The central controversy is Armenia’s demand for a package solution – i.e. a simultaneous resolution of all the points of the negotiations. Azerbaijan’s expectation is that an interim status for NK will be agreed, with a later referendum on the region’s final status. For comparison, the failed 1997 Ter-Petrosian-Aliyev peace plan required Armenia to return 6 territories including some parts of Lachin, while today’s proposal provides for a stricter timeline for returning Lachin and Kalbajar, and an interim status for NK. This proposal includes elements of the updated Madrid Principles and the Kazan Document from 2011.

Azerbaijani authorities rely on Moscow’s ability to convince Armenia, whereas ironically, Armenia believes that Moscow can protect Yerevan’s interests, given Armenia’s perceived status as a strategic ally. However, the life span of the Moscow-led negotiations could expire; essentially the timeline runs until Armenia’s parliamentary elections in May 2017, when the current authorities’ decision-making power could be diminished. Based on this timeline, Moscow’s mediations need greater clarity and quicker results in order to move forward.

CONCLUSIONS: Since the April clashes, expectations have proliferated of a possible quick, tangible move towards peace, at least regarding an agreement on basic principles. The other expectation, which remains unmet, was that the Western Minsk Group Co-Chairs would lead the peace process. But after the St. Petersburg meeting between the Azerbaijani and Armenian presidents, Moscow started to lead the negotiations process, while the OSCE Minsk Group took the leading role in establishing an investigative mechanism and increasing the capacity of the OSCE Chairman in Office Representative. The fact that the Co-Chairs were permitted to participate in the final part of the St. Petersburg meeting demonstrates this separation of tasks.

However, the fact that the Minsk Group-led process looks like an attempt to promote “ceasefire building” rather than “confidence building” is problematic. Work needs to be done on confidence building measures, especially in terms of the human dimension in order to help revitalize trust among the conflicting parties and their respective publics.

The Moscow-led negotiation process faces three obstacles to cutting a deal: first, the Russian process has not found a formula that satisfies both conflicting parties regarding the status of NK, the referendum and other key obstacles to a peace agreement. Second, Moscow has a limited interest in a final solution; it will not take steps that risk upsetting either Armenia or Azerbaijan, which means a deadlock. Third, the so called hostage crisis in Armenia, and the harsher position among the Armenian public towards a de-occupation of Azerbaijani lands, constitute additional obstacles. In the wake of the parliamentary election in May 2017, President Sargsyan will feel more pressure from members of the political elite not to make concessions that damage their political capital.

More in this category: « The phantom menace of ISIS in Northern Afghanistan The North Caucasus insurgency: weakened but not eradicated »
back to top