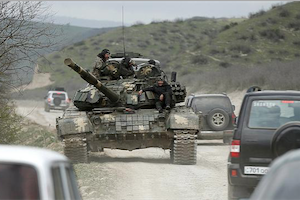 BACKGROUND: On July 12, Foreign Minister of Russia Sergey Lavrov paid a visit to the Azerbaijani capital to meet President Ilham Aliyev and Foreign Minister Elmar Mammadyarov, in order to discuss the peace plan on the resolution of the Armenia-Azerbaijan conflict over Nagorno-Karabakh. The visit followed similar talks in the Armenian capital Yerevan several days earlier, as well as the trilateral talks between Presidents Putin, Aliyev and Sargsyan in St. Petersburg in June. In early July, speaking at a session of the Cabinet of Ministers, President Aliyev called the ongoing talks the “most dynamic in the history of the conflict.”

Indeed, following the heavy April clashes between the warring sides, which resulted in dozens of dead on both sides, the mediators from the OSCE Minsk group, co-chaired by Russia, France and the U.S., organized an intensive round of negotiations, first in Vienna on May 16 and then in St. Petersburg. Following these meetings, President Putin and his French counterpart Francois Hollande have discussed Nagorno-Karabakh conflict on July 1, in which the Russian President informed the French leader about the results of the peace talks and called for unified action towards the resolution of the conflict. Similarly, on July 6, at the initiative of the Russian side, President Putin discussed the Nagorno-Karabakh conflict with President Barack Obama. President Obama apparently gave a high appraisal to the efforts of the Russian side for the resolution of the conflict.

The meeting of three Presidents in St. Petersburg on June 20 ended with an unusually positive tone from all sides. Lavrov noted that the “sides have developed concrete steps towards the activization of the peace process.” The warring sides also agreed to increase the number of OSCE monitors on the cease-fire line. His Azerbaijani counterpart, Mammadyarov, called the meeting “positive and constructive.” The Deputy Head of the Presidential Administration in Baku, Novruz Mammadov, in his interview to the state news agency Azertag, stated that “St. Petersburg meeting was different from other ones in a sense that it was more constructive in terms of range of issues discussed and the willingness of the sides to resolve the conflict.” Mammadov also stressed that in the meeting, the step-by-step approach to the conflict resolution was discussed.

IMPLICATIONS: The April clashes were the bloodiest since the cease-fire was signed in 1994. Dozens of dead soldiers and officers from both sides created a new wave of nationalism and rise of patriotism in both countries. Yet, the bigger impact of the April “four-day war” was felt on the ground. For the first time since 1994, Azerbaijani military units were able to liberate some villages and strategic hills held under Armenian occupation for more than two decades. The villages of Talysh and Madagiz and the Lale-Tepe hill were returned to Azerbaijani control. This achievement, although small in territorial terms (800 hectares according to Armenian sources, and 2,000 according to Azerbaijani ones), was very important in symbolic and psychological terms. Not only did it raise the positive spirit and feeling of patriotism in Azerbaijani society, but it also destroyed the 20-year myth of the indefeasibility of the Armenian army as well as its defense line in Nagorno-Karabakh. In a few hours, Azerbaijani army units were able to move on the offensive and internet portals were full of videos of running Armenian soldiers with empty defense trenches.

These developments have shown that the Nagorno-Karabakh conflict is indeed not frozen, as many politicians have claimed. The conflict has the capacity to resurrect at any moment, resulting in even higher causalities. The current status-quo can and should no longer be maintained. The peace process, which faded out after the collapsed talks in Kazan in 2011 under the patronage of then Russian President Dmitri Medvedev, must be reactivated and geared towards producing real tangible results. Maintaining the status-quo serves no good to the interests of the regional security. Russia, having engaged itself in the Ukraine conflict, is not interested in losing control of developments in another hotspot on its southern border. The appearance of working to resolve this conflict in the South Caucasus would earn Russia credit as a “peacemaker”, reduce its tensions with the EU over Ukraine, and possible could lead to the normalization of U.S.-Russian relations. Whether this means that Moscow would actually want a peace deal concluded and implemented is another matter – in particular, since it is the status quo that cements Russian influence over both Armenia and Azerbaijan. The answer would likely depend on the specific of an actual deal, and whether Moscow believes that it helps or harms its regional interests.

Meanwhile, in Yerevan, the April clashes and the military losses on the ground have produced a high level of frustration in society with both the Armenian leadership and the position of Russia. Protestors in Yerevan have burned the Russian flag and portraits of President Putin. Many Armenians accuse Russia, as well as other members of Collective Security Treaty Organization like Belarus and Kazakhstan, of ignoring their promised pledges of collective defense to Armenia. Moreover, Armenian President Sargsyan openly expressed his irritation with Minsk and Astana for their refusal to attend a summit in Yerevan during the “four day war” in April. It was clear that Baku’s proactive foreign policy vis-à-vis Belarus and Kazakhstan left Armenia without solid regional allies.

It is obvious that the current activization of the peace talks is mainly led by Moscow. The Kremlin appears to be seeking to prevent another wave of violence on the frontline that it cannot control. Moreover, further violence could result in the further advance of the well-trained, equipped and financed Azerbaijani army. Such advances would further destroy the balance of power on the ground. At the same time, it would also pose serious risks to the stability of the regime in Yerevan, which has been suffering from public protests for the past two years. In turn, it could ruin the strategic alliance between Moscow and Yerevan, since Armenia will certainly accuse Russia for any in failure to defend Armenia. Due to the importance of Azerbaijan for Russia’s foreign, security, trade and transport policy in the region, Russia would go to great lengths to avoid intervening in the conflict openly on Yerevan’s side.

Thus, in order to prevent such escalation of the conflict, Russia appears to be pushing for a deepening of the peace process on the basis of a step-by-step approach, something originally proposed by the OSCE Minsk group in 1997 and rejected by the Armenian side. The proposal envisages the liberation of Azerbaijani regions outside of Nagorno-Karabakh in the first stage, the return of Azerbaijani displaced people to their hometowns, the normalization of the transport and communication lines, the resumption of trade and commerce and eventually a decision on the status of Nagorno-Karabakh itself.

CONCLUSIONS: It remains to be seen whether this current dynamic pace of talks will produce results or not. Much depends on the willingness of the Russian leadership and the leadership of the warring sides to accept certain compromises. Recent political unrest in the Armenian capital shows the fragility of the Armenian regime. Sargsyan is facing increasing pressure from the opposition to resign. If the talks drag out again, the momentum will be lost and the frustration on the front line could again spin out of control. An alternative scenario would be a development similar to that of 1999, when domestic chaos in Armenia prevented further compromises on the negotiation table and led to a new deadlock.

More in this category: « Real friends? Georgia-Turkey relations in the wake of the July 15 coup attempt Russia and Turkey come back to the gas table »
back to top