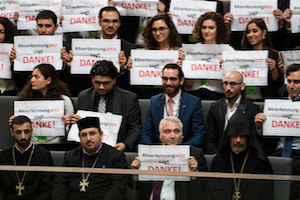 BACKGROUND: On June 2, the Bundestag – Germany’s lower house of parliament – by an overwhelming majority adopted a resolution referring to the mass massacre and deportation of Armenians and other Christian minorities in the Ottoman Empire during World War I as genocide. The vote on the resolution had been postponed twice on the federal chancellery’s request: in 2015, when the 100th anniversary of the beginning of the deportation was commemorated, and in February 2016. The resolution recognizes Germany’s complicity: the principal author of the resolution, the Green Party’s co-chair Cem Özdemir (a son of Turkish immigrants) noted that the German Empire had supplied the Ottoman Empire – an ally in the Great War – with weapons used to carry out war crimes. Moreover, German diplomats and military advisors knew what was happening but made no effort to prevent the atrocities. The resolution also calls for steps towards normalization of Armenian-Turkish relations.

Turkey’s recently appointed Prime Minister Binali Yildirim said a day before the German vote that what happened to the Armenians had been an “ordinary event,” and also tried to convince German Chancellor Angela Merkel to prevent the Bundestag vote, to no avail.

Predictably, Turkey reacted angrily to the vote. Turkey’s most adverse previous reaction took place in 2001, after France’s recognition of the mass killings as genocide. Turkey then postponed the realization of multibillion-euro economic projects. In response to recognitions from other European countries, Turkey has routinely temporarily recalled its ambassadors from these countries, including Austria, Luxembourg, and the Vatican in 2015. However, after the ambassador to Germany was recalled, several Turkish politicians made unconventional demonstrations of anger and frustration.

President Recep Tayyip Erdoğan stated that Germany first needed to answer for the Holocaust, then for the murder of 100,000 people in Namibia. However, Germany’s condemnation of the Nazi crimes, including the Holocaust, is a well-known fact. The resolution adopted on June 2 mentions the Holocaust six times and suggests that Turkey should come to terms with its past as Germany did. During the hearings in the Bundestag, both Özdemir and Germany’s former Defense Minister Franz Josef Jung also called on the parliament to address the Herero massacre in Namibia, a former German colony, in 1904-1907.

Furthermore, Erdoğan suggested that the blood of 11 German MPs with Turkish roots, most of whom supported the resolution, might be “tainted” and that they should be blood tested to check “what kind of Turks they are.” The Mayor of Ankara Melih Gökçek posted photos of the 11 politicians, calling them “traitors.” Some of these MPs reported receiving numerous death threats and have been placed under police protection.

IMPLICATIONS: The timing for the adoption of this resolution might seem imperfect. A few days later, a decision was expected on the fate of the EU-Turkey migration deal, providing for the EU’s acceptance of Syrian refugees currently residing in Turkey, and the return of the same number of migrants from other countries who previously moved illegally from Turkey to EU member states. The EU would also grant a visa waiver for Turkish nationals. That deal would be particularly important for Germany, as it has been dealing with the largest number of migrants. Following the preliminary stage of the deal, the migration flow from Turkey was reduced.

However, Turkey failed to meet some of the visa waiver conditions. Most importantly, Turkish officials refused to make amendments to the laws on terrorism, claiming that such amendments would make the fight against Kurdish militants less effective. They also threatened to cancel the migration deal unless the EU grants the visa waiver without further conditions. The EU, on the other hand, is hardly ready to compromise on the requirements that its neighbors aspiring to visa-free travel should meet. Additionally, the threat to drop the migration deal implies Turkey’s readiness to use migration as leverage to pressure the EU if the number of migrants grows again.

A number of additional concerns exist regarding the possible increase of authoritarian tendencies and undermining of secularism in Turkey. Particularly, Turkish laws on terrorism have in some cases been used in order to silence or even imprison journalists and other critics of the authorities. Turkey’s decision to strip some MPs of their immunity has also caused concerns, as have the recent takeovers of media critical of Erdoğan’s policies. Furthermore, Ankara has recently annoyed Berlin on a number of occasions. The German ambassador has been called in several times, as Turkish authorities have disapproved of some content in German school textbooks, demanded a ban on music videos satirizing Erdoğan on German TV and other de facto limitations to the freedom of speech, and so on. Several German journalists have lost their accreditations because of their critical coverage of the situation in Turkey.

Yet the Bundestag adopted only a resolution, which has no legal consequences, rather than a federal law, leaving room for a comprehensive political dialogue with Turkey. Ankara must now choose whether to escalate tensions in its bilateral relations with Germany, fulfilling Erdoğan’s warning that the resolution would damage diplomatic, economic, business, political, and military ties. The head of the Bundestag’s committee on human rights, Michael Brand, seemed confident that bilateral relations would not seriously suffer: “I can’t imagine that Turkey, which is currently finding itself isolated in its foreign policies in the face of mounting pressure from ISIS and the PKK, could afford to sever its ties with Germany – one of its most reliable partners.”

Any concrete steps towards normalization of Turkey’s relations with Armenia, as suggested by the resolution, are currently very unlikely. The Turkish government will hardly yield to what it proclaimed to be “unacceptable pressure.” It seems that a prediction by Turkey’s former ambassador to the United Kingdom, Ünal Çeviköz, that increasing pressure on Turkey to recognize the 1914 events as genocide would worsen Armenian-Turkish relations, as well as Turkey’s bilateral relations with other states (see the 05/27/15 Issue of the CACI Analyst), was correct. Turkey will also avoid any action that would place Azerbaijan in a difficult position. On the other hand, Armenia will not be interested in a revival of the Zürich protocols, unless Turkey agrees to detach the bilateral relations from the Nagorno-Karabakh conflict.

CONCLUSIONS: The Bundestag’s resolution is unlikely to have an immediate positive impact on Armenian-Turkish relations, although it may have a longer-term effect. For now, the situation will probably remain tense if Ankara decides to let its frustration influence its relations with Germany and the EU. The genocide recognition by EU’s leading member state may potentially have both a political and a psychological impact, inducing some other countries to proceed with recognition. A further growth of authoritarian tendencies in Turkey and its regional ambitions may also encourage additional recognitions. In this regard, the efforts of the Armenian diaspora will be supported by the Kurdish and some other diasporas as well.

A possible instrumentalization of the genocide issue in order to contain Turkey’s ambitions is not the most favorable approach. However, the current situation became rather predictable after the missed opportunity to normalize the bilateral relations with Armenia.

More in this category: « Fixing the Aral Sea disaster: towards environmental cooperation in Central Asia? Chechen authorities raise pressure on human rights organizations »
back to top