Commemorating the 1916 Massacres in Kyrgyzstan? Russia Sees a Western Plot

The year 2016 marks the 100th anniversary of a bloody popular uprising in Central Asia that was violently suppressed by Tsarist Russia. The Kyrgyz Government has announced that this year will be dedicated to an examination of the events, and thus far, that has led to a knee-jerk reaction from the Russian side, with a Russian diplomat in Bishkek intimating that some Kyrgyz are inciting ethnic divisions by organizing events in connection with the commemoration. Should cooler heads prevail, there is a wealth of literature that could help the Kyrgyz people bring closure to a tragic chapter in their history. 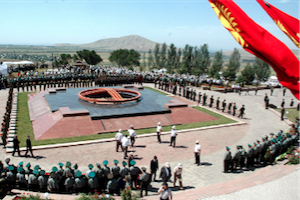 BACKGROUND: This year Kyrgyzstan marks the 100th anniversary of the revolt by the Kyrgyz people against their conscription into the imperial Russian army and the subsequent flight to China, a tragedy known in Kyrgyzstan by the word “Urkun,” meaning exodus.

Decades of Russian Tsarist policy directed at land acquisition in Central Asia precipitated the tragedy of 1916. The official plan was to use the land acquisitions to facilitate settlement of the Turkestan land by settlers – almost exclusively Slavic – from the European parts of the Russia Empire and Siberia, with the end goal being declaration of Russian autonomy. Local people, many of whom worked as hired labor and were already subject to taxes, refused to fulfill Tsar Nicholas II’s decree of July 25, 1916 conscripting 400,000 men from the ages of 19 to 43 into support battalions in the Tsar’s army. This decree sparked a mass uprising across Central Asia that was put down by force and sent many Kyrgyz, Kazakhs and Uzbeks fleeing to China to escape being killed at the hands of Russian soldiers and armed villagers.

The year 1916 was the culmination of a long period in which Central Asian peoples strove to establish statehood on territories populated by various Turkic ethnic groups. At the time, some in Russia even acknowledged the scale of the atrocities, forecasting difficulties ahead in relations. Alexander Kerensky, deputy of the Russian state Duma and future leader of the Mensheviks, in December 1916 led a Duma investigation that composed a special report in the wake of the events in what was then known as Turkistan. He emphasized that what had happened and its effect would be felt for a long time, not only in the lives of the peoples of Central Asia, but in Russia as well. The report stated that “the nomads were mercilessly exterminated by tens of thousands, consistently and systematically.”

To mark the centenary of Urkun, Kyrgyz President Almaz Atambayev in 2015 issued a decree that called for the events of 1916 to be commemorated at the state level and for a more accurate interpretation of the centennial events to be rendered. In line with the second purpose, the 1916 events will be the subject of discussions at scholarly conferences to be held this year in Kyrgyzstan.

Robust discussions have already begun, and these have verged on creating a diplomatic row. During a recent round table in Bishkek called “The revolt of 1916: a Look Back after 100 Years,” Alexey Mzareulov, deputy to the Russian Ambassador in Bishkek, spoke disparagingly of Azimbek Beknazarov, a well-known public figure in Kyrgyzstan. In August 2015, Beknazarov organized a kurultai (a Kyrgyz traditional assembly) at Lake Issyk-Kul, and called for the events of 1916 to be considered a genocide committed against the Kyrgyz people. The Russian diplomat responded by suggesting that Kyrgyz law enforcement bodies should regard Beknazarov’s call as “inciting ethnic divisions.”

Views on the 1916 events are heated on both sides. In his speech at the round table in Bishkek, Akylbek Dzhumanaliev, director of the Institute for History, said that “many Kyrgyz historians still believe that the current Russian government in the person of Vladimir Putin or Duma speaker Sergey Naryshkin should apologize to the Kyrgyz people for this mistreatment.” During the roundtable it was announced that Kyrgyz historians intend to sign a resolution demanding apologies from Russia for the events of 1916.

IMPLICATIONS: The heated emotions portend a potential thorn in the side of Kyrgyzstan’s relations with Russia. In other instances, the Russian Government has been quick to back claims of genocide – when the Russians are not the ones fingered. Last year, President Putin took part in ceremonies in Yerevan marking the deaths of 1.5 million Armenians at the hands of the Ottoman Empire in 1915, just a year before the 1916 events in Central Asia. “The position of Russia was and remains consistent: we have always considered there is not and can never be any justification for the mass murder of people,” Putin said in a speech in Yerevan. Putin’s words drew a sharp reaction from Turkey, which reminded Russia that Russia has its own history, complete with atrocities in the Caucasus, Central Asia and Eastern Europe.

Voices in the Russian media have been quick to assess President Atambaev’s decree as providing a political and legal basis for possible anti-Russian activities in the spring of 2016. Alexander Sobyanin, a Russian political analyst said in an interview that “Atambaev’s decree is worded in such a way that it implies neither a commemoration nor a search for truth. It is formulated as if the Russian side is guilty in all instances.” In June 2015, another Russian expert, Oleg Gornostaev, characterized Bishkek’s plans to celebrate the 100th anniversary of the revolt as an overtly political move directed against Russia. “Kyrgyzstan wants to build its statehood on an anti-Russian platform,” he alleged on the website of Segodnya newspaper.

Thus far, comments by Russian experts and at least one Russian diplomat suggest that Russia appears to have a “tin ear” when it comes to the importance of 1916 in Kyrgyz history and on the people’s psyche. For the Kyrgyz people, the year 1916 was characterized not only by the revolt, but also by Urkun, the “Great Flight to China”, which claimed the lives of entire generations of families, whose offspring mourn their loss up to the present day. Beknazarov’s aforementioned kurultai, which took place in Issyk-Kul last summer, was in fact not devoted to inciting any anti-Russian or ethnic hatred but to something else entirely: people gathering to remember their ancestors, who fled to China through one of the high mountains passes above Lake Issyk-Kul.

The kurultai is only the latest example of commemorations that have taken place over the last decades, after Kyrgyzstan declared independence and had the opportunity to speak more openly about its history. Since 2005, thanks to the initiative of the ”Asaba” party and various public figures, expeditions have been organized in the mountains above Lake Issyk-Kul to collect and lay to rest the remains of ancestors. In 2006, a memorial to the victims of 1916 was erected on the road to Lake Issyk Kul. In April 2008, the Kyrgyz Government approved a resolution to hold a yearly day of remembrance for the victims of the 1916 national uprising on the first Friday of August.

However, Russian political scientists perceive that in an environment of growing social tensions due to poverty and a general downturn in economies across Eurasia, any commemorations will take on an anti-Russian slant. Their answer, thus far, has been to distance themselves from the issue. For example, when it comes to any mention of compensation, the Russians turn the other way, contending that the $5.8 billion in humanitarian aid that Russia claims to have provided to Kyrgyzstan over the last 10 years is a sign of Russia’s goodwill toward the Kyrgyz people and nation.

Naturally, the Russian media cannot help but see the involvement of the West in the matter. The centrasia.ru website opined that "the centenary of the Kyrgyz revolt of 1916 will be held in the context of the escalating stand-off between Moscow and the West. The peculiarity of the moment is that the West is ready to use any historical dates against Russia, even from those from the shadowy past that are associated with the aggressive actions of the imperial power in Turkestan”.

In reality, the West knows little about the matter. A search for sources in Western scholarship on the subject of the revolt of 1916 in Central Asia produces few results. One exception is a book written by Edward Sokol, published in 1952 by Johns Hopkins Press (which incidentally has not been translated into Russian or other languages of the Central Asian peoples). In an evenhanded manner, Sokol’s book gives a complete picture of the causes and consequences of the 1916 uprising in the Tsarist Central Asia.

Another source of information that might enlighten the Russians is Kerensky’s report. Kerensky moved to the U.S. in 1946 and taught at Stanford University in California. In 1968, the Center for Humanitarian Studies at the University of Texas at Austin acquired his archive, and that is where Kerensky’s report can likely be found.

CONCLUSIONS: Given that this year will be given over to an examination of the events of 1916, it makes sense that there be an airing of opinions based on all available historical sources. Yet, to date, the Russian side seems to be missing the point by neglecting to consider the Kyrgyz point of view. As long as there is no historical closure – in the form of a reexamination, an apology or something else – the issue may well continue to fester. Ironically, the more the Russians stonewall the issue and aggravate genuine sentiments in Kyrgyzstan, the more the West will get interested.

More in this category: « Is Washington re-engaging Baku? The impact of Russia's Turkey sanctions on the North Caucasus »
back to top