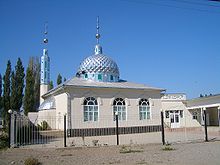 On February 27, a special roundtable entitled “Ukrainian scenario in Kyrgyzstan” took place in Bishkek. The participants included government representatives as well as civil society activists and opposition politicians, who expressed their diverging views on the possibility of a “Kyrgyz Euromaidan” in the spring, usually cited as the season of great political turmoil in Kyrgyzstan.

The events in Ukraine are under close scrutiny in Kyrgyzstan and have become a source of public debate. Local experts and politicians are keen to draw parallels between the two countries that to some extent have similar recent political histories. According to opposition MP and leader of the recently created United Opposition Movement Ravshan Jeenbekov, anticipations of a repeated Ukrainian scenario in Kyrgyzstan are not groundless. “Ukraine’s Yanukovych and Kyrgyzstan’s Atambayev have seized power in their own hands and presidential institutions are in both cases unaccountable to anyone but the Kremlin, which exercises full political and economic control over the countries, pressuring them to join the Customs Union,” Jeenbekov stated during the roundtable. An opposition MP proceeded by stating that “Yanukovych came to power in Ukraine when the country had a semi-presidential system and turned it into a strong presidential one and Kyrgyzstan’s President Atambayev came to power with the same political system and within two years managed to turn the country into an authoritarian state.”

Another participant of the round table, Kyrgyzstan’s Vice Prime Minister for Law Enforcement, Security and Border related issues Tokon Mamytov called on the MP to refrain from drawing direct parallels between the two presidents. According to him, Kyrgyzstan’s President Atambayev did not concentrate power to himself and his regime cannot be described as authoritarian. He proceeded by stating that “As a Vice-Prime Minister, I am not as accountable to the President or the Prime Minister as I am to the Kyrgyz Parliament. Ukraine’s President Yanukovych made the same mistakes as our previously ousted two presidents did, namely their family members de facto controlled the country’s financial resources and had a direct influence over the country’s political course.” Indeed, the Kyrgyz public is not aware of Atambayev’s family members and their occupations, which was previously the case with the two ex-Presidents. This, in turn, does not leave much room for opposition politicians to accuse the President of establishing family based rule.

During the course of the roundtable, Sergei Ponomarev, advisor to the Kyrgyz Prime Minister Jantoro Satybaldiev stated that a Ukrainian scenario will not take place in Kyrgyzstan under normal circumstances, arguing that the leaders of the recently formed United Opposition Movement are interested in taking power by organizing the same social turbulence as in Ukraine and called an opposition MP Ravshan Jeenbekov “an instrument of external powers in big politics,” citing his recent visit and participation in the Ukrainian Euromaidan. In interviews to local sources of mass media, Jeenbekov, the new face of the Kyrgyz opposition, confirmed his visit to Kiev and his meetings with then Ukrainian opposition politicians, whom he called “partners and friends.” An MP dismissed the claim that his movement had any plans or willingness to destabilize the socio-political situation in Kyrgyzstan and repeating the Euromaidan events in Bishkek and called on the country’s president to start a dialogue with them to discuss all the gaps in the country’s current political and economic direction and come up with joint decisions. The Kyrgyz opposition asserts that dialogue can take place with the President only due to their firm belief that the country’s executive as well as the legislative are under his direct control.

Kyrgyz political analyst Marat Kazakpaev believes that before making parallels between the two countries, it is necessary to analyze the internal and external factors in the region and in the global arena that affected these processes and gave rise to the events occurring in Ukraine. Kazakpaev concluded that Kyrgyzstan is one step ahead of Ukraine since the country underwent its second revolution since independence already in 2010.

Euromaidan is foremost a value-oriented wave of citizens’ uprisings, calling for democratic values and integration with Europe. Kyrgyzstan, due to its geographical location is not in a position to seek European integration but this of course does not exclude the possibility of mass movements in the country in response to a deteriorating socioeconomic situation and a recently created united opposition movement to mobilize the masses. The country’s leadership has publicly announced the creation of a new special division regiment, which in the words of the Minister for Internal Affairs “has the primary task of managing public order in accordance with the principles of democratic policing and exists in almost all the neighboring states.” Experts have already started comparing the new Division with Ukraine’s “Berkut,” which has brutally used force against the demonstrators in Euromaidan and perceive it as preparations by the country’s leadership for possible mass demonstrations in the spring.

Regarding the current situation in the Crimea, the Kyrgyz political leadership as well as analysts did not make any official statements or comments.