During his visit to Kazakhstan on September 14, China’s President Xi Jinping asserted that China supports Kazakhstan’s territorial integrity and independence, and opposes any interference in Kazakhstan’s internal affairs. Xi's remarks sounded like a thinly veiled warning to Russia. Moscow has ramped up its aggressive rhetoric against Astana over its refusal to support Russia’s military invasion of Ukraine, which Kazakhstan has interpreted as a possible Russian threat to its territorial integrity. China’s explicit support for Kazakhstan should also be considered against the backdrop of Russia’s recent military defeats in Ukraine, which have exposed multiple military weaknesses. 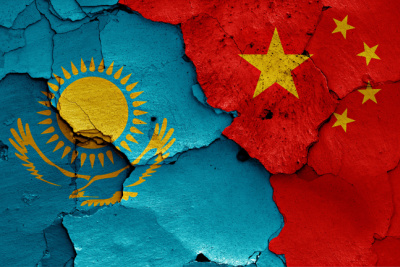 BACKGROUND: Xi Jinping’s trip to Kazakhstan was his first foreign state visit since the outbreak of the COVID-19 pandemic in 2020. It marked the 30th anniversary of the establishment of diplomatic relations between Kazakhstan and China. Xi and Kazakhstan’s President Kassym-Jomart Tokayev also discussed several important bilateral issues such as trade, energy and interconnectivity. However, Xi’s statement on China’s support for Kazakhstan’s sovereignty received the most attention: “No matter how the international situation changes, we will continue to resolutely support Kazakhstan in protecting its independence, sovereignty and territorial integrity, firmly support your ongoing reforms to ensure stability and development, and categorically oppose the interference of any forces in the internal affairs of your country.”

President Xi’s remarks come amidst heightened tensions between Moscow and Astana over the war in Ukraine, and hostile rhetoric coming from Russian politicians and propagandists against Kazakhstan’s territorial integrity. Several decisions of Kazakhstan’s leadership, which are at odds with Russian interests, have recently drawn Moscow’s ire. The Kremlin has been furious over Astana’s refusal to support Russia’s military invasion of Ukraine and its attempts to circumvent Western sanctions. The same goes for Kazakhstan’s attempts to bypass Russia in its oil and gas exports to Europe, and to attract Western companies that are exiting the Russian market.

On August 2, a post attributed to Dmitry Medvedev, Russia’s former president and current deputy head of the Security Council, was published on the VKontaktie social network, in which the author declared that territories of northern Kazakhstan historically belong to Russia. Although the post was quickly deleted and was attributed to hacking, it was widely viewed as a thinly veiled threat that Moscow might take these lands by force. Moreover, prominent Russian media personalities took aim at Kazakhstan when its leadership decided not to organize the World War II Victory Parade this year. In late April, Tigran Keosayan, a well-known Russian television talk show anchor and one of the most prominent Russian propagandists, posted a tirade on his YouTube channel where he called Kazakhstan ungrateful and threatened that it might share Ukraine’s fate. MP Konstantin Zatulin issued similar threats in June this year.

Although Russia has regarded Kazakhstan as one of its closest allies, similar rhetoric has permeated the Russian political elite and media for years. The Kremlin has frequently referred to Kazakhstan’s ethnic Russian minority, which comprises 18 percent of its population, in order to put pressure on Astana. However, Russia’s war in Ukraine has had significant ramifications for the security situation in Eurasia, increasing fears that Kazakhstan could be Moscow’s next target as Astana seeks to chart its own policy course. In addition, there is a widespread opinion among Russian political elite and pundits that Astana is ungrateful for Russia’s help in suppressing the violent uprising against President Kassym-Jomart Tokayev earlier this year. In this context, several observers saw Xi’s words as a warning to Russia not to meddle in Kazakhstan’s internal affairs.

IMPLICATIONS: The war in Ukraine is the main cause of disagreement between Moscow and Astana. Kazakhstan has strived to remain neutral in the conflict and declined to send troops or provide other military assistance to support Russia, which is experiencing severe manpower shortages in its army. In effect, Vladimir Putin had to announce a risky partial mobilization on September 21 – the first since World War II – causing a wave of discontent and protests among Russians, many of whom fled abroad to avoid the draft.

Moreover, Moscow was infuriated by Astana’s refusal to recognize Ukraine’s breakaway territories of Lugansk and Donetsk, which President Tokayev explicitly and publicly reiterated in Putin’s presence during the St Petersburg International Economic Forum in June this year. Astana also refused to recognize Russia’s annexation of the Lugansk, Donetsk, Kherson, and Zaporizhzhia regions through illegal referendums held on September 23-27.

Neither is Kazakhstan eager to assist Russia and Belarus – its partners in the Eurasian Economic Union – in circumventing Western sanctions. Astana has been working with the U.S. and the EU to comply with the sanctions regime in order to avoid being hit by secondary sanctions. For this purpose, Kazakhstan on September 20 imposed additional demands on Russian and Belarusian freight shippers barred from entering the EU, but carrying goods to Europe through Kazakhstan’s territory. Kazakhstan’s largest bank, Halyk Bank, suspended transactions through Russia’s payment system Mir after the U.S. Treasury Department issued a warning about secondary sanctions that can hit institutions using Mir outside Russia.

Astana also seeks to attract companies willing to relocate from Russia due to sanctions, and has already been in talks with dozens of firms willing to move their headquarters and production facilities to Kazakhstan. Finally yet importantly, in July Kazakhstan announced that it would seek options for exporting its hydrocarbons to Europe, bypassing Russia, in order to help stabilize the European market, which is currently struggling with a severe energy crisis. In immediate connection with this announcement, a Russian court ordered a temporary closure of the Caspian Pipeline Consortium’s oil terminal at Novorossiysk, which is responsible for transferring about two-thirds of Kazakhstan’s total oil output to European markets via Russia. The order was based on alleged environmental violations and was reversed after two days, but this incident is yet another example of how tense Russo-Kazakh relations have recently become.

The deteriorating relations and Russia’s hostile rhetoric against Kazakhstan have alarmed China. Kazakhstan has long been strategically important for Beijing as a significant hydrocarbon supplier, and a corridor linking China with the Caspian Sea and Europe. So far, relations between China and Kazakhstan have focused on economy and interconnectivity. However, Beijing and Astana also have ambitions to develop cooperation in the security and defense spheres, which will include bilateral military drills. This is a signal to Russia that its role as a security guarantor in Kazakhstan and across Central Asia could soon start to decline.

Moreover, sanctions imposed on Russia and Belarus have severely disrupted logistics through the Northern Corridor linking China with Europe through Russia. China has therefore turned its attention to the Middle Corridor (Trans-Caspian International Transport Route) as an alternative connection to Europe bypassing Russia. Kazakhstan is a vital part of this route and has already started working with Azerbaijan, Georgia and Turkey to increase both capacity and efficiency of the Middle Corridor to improve its transit capabilities.

CONCLUSIONS: The war in Ukraine has affected China’s economy by hurting its investments in the country, disrupting trade routes and driving up prices for hydrocarbons and foodstuffs. Thus, China is now under pressure to find alternative overland trade routes to Europe – particularly important due to its economic dependence on commodity exports. The prospect of a prolonged war in Ukraine concerns Beijing, which has warned the Kremlin against destabilizing other countries in Eurasia – especially Kazakhstan, which is of particular strategic importance to China. While Russia currently does not have the military capabilities to attack Kazakhstan, Astana’s pursuit of an independent policy could motivate Moscow to destabilize the country through non-military means. Yet this would endanger relations with China, on which Russia is becoming increasingly dependent due to Western sanctions. China has signaled its interests regarding Kazakhstan, which has thereby gained increased room for geopolitical maneuver vis-à-vis Russia and the means to avoid entanglement in Russia’s risky confrontation with Ukraine and the West.

Natalia Konarzewska ( This email address is being protected from spambots. You need JavaScript enabled to view it. ) is a graduate of the University of Warsaw and a freelance expert and analyst with a focus on political and economic developments in the post-Soviet space.

More in this category: « The Middle Corridor and the Russia-Ukraine War: the Rise of New Regional Collaboration in Eurasia? ISKP Attacks in Uzbekistan and Tajikistan »
back to top