Uzbekistan Between Ukraine and Russia: The Curse of Positioning

Russia’s war in Ukraine has become an existential geopolitical challenge for all former Soviet republics. Uzbekistan’s formulation and expression of a position on the war has been difficult in an ethical and political sense. Positioning on this matter is also a serious test for the strategic partnership and unity of Central Asian states. At the UNGA, Uzbekistan did not vote on the resolution blaming Russia for aggression against Ukraine. However, it voted against the exclusion of Russia from the UN Human Rights Committee. Uzbekistan’s MFA later brought some clarity to Tashkent’s position, which could potentially irritate Moscow. The curse of positioning reflects the enduring and perplexing geopolitical status-quo in Central Asia. 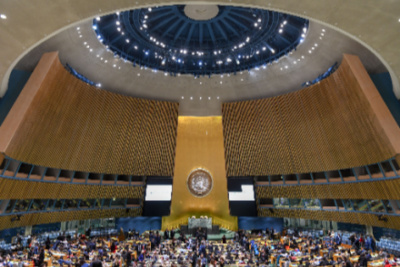 BACKGROUND: On March 2, 2022, the United Nations General Assembly adopted a resolution blaming Russia for the invasion of Ukraine. Uzbekistan did not vote. This was a delicate moment for Uzbek diplomacy since, on one hand, Uzbekistan signed a strategic partnership treaty with Russia in 2004 and a Treaty on Alliance Relations in 2005, although it left the CSTO in 2012. And on the other, Uzbekistan has established and developed very close and friendly relations with Ukraine.

Uzbekistan’s non-participation in UNGA voting can to some extent be regarded as taking a neutral position on this specific and delicate case. Uzbekistan’s Minister of Foreign Affairs Abdulaziz Kamilov later explained his country’s position stating first, that Uzbekistan does not recognize Russia’s annexation of Crimea or the independence of the separatist Luhansk and Donetsk Republics, and second, that Uzbekistan recognizes the territorial integrity of Ukraine. This official statement made it clear that Tashkent supports the pre-war status-quo in Ukraine, that is, the situation before 2014.

After the UNGA voting process, another UN vote challenged Uzbek diplomacy on April 7; Uzbekistan voted against the exclusion of Russia from the UN Human Rights Council. This positioning by Uzbekistan seemed paradoxical since its first and second vote obviously contradicted each other. Tashkent took Ukraine’s side in the first case, Russia’s in the second. This hesitant behavior actually revealed the dual perspective of Uzbekistan, which alongside other Central Asian countries, is facing a geopolitical transformation that is taking place in this part of the world, as well as social and political developments in the country itself. The geopolitical dualism relates to the global confrontation between the West and Russia; the socio-political dualism reflects an ambiguous process of domestic policy and public opinion shaping.

Geopolitically, however strong Uzbekistan is in its own region, the country does not have full freedom of maneuver between great powers. This is particularly true vis-à-vis Russia, which has frequently subjected Uzbekistan to pressure and information attacks in different forms and under different pretexts. Socio-politically, the country’s society does not have a consolidated view of the war in Ukraine. Many believe that Uzbekistan is dependent on Russia, especially due to the 2.6 million labor migrants working in that country, trade, and remnant memories of the glory of the Soviet past.

Interestingly, soon after Kamilov’s “famous” statement, he was dismissed from his post and appointed Deputy Secretary of the National Security Council under the President of Uzbekistan. Rumors immediately began to spread that the minister’s statement angered Moscow and that this was the cause of his dismissal.

IMPLICATIONS: Uzbekistan has always been an active UN member and initiated numerous important initiatives related to Central Asia. All these initiatives were supported by the UN, which adopted several corresponding UN resolutions. From the initial period of independence until today, Uzbekistan has maintained a quite high profile in all international organizations, especially in the UN. Moreover, appeals to UN resolutions, rules and authority, and international law in general have constituted bedrock principles of Tashkent’s foreign policy. Therefore, voting at UNGA was a serious moral and political test for Uzbekistan in terms of adjusting its national interests in accordance with international law and universal norms and values.

However, Uzbekistan was in the absolute minority, among a handful of countries, which either did not participate or abstained during the UNGA vote. Yet the two corresponding resolutions were adopted and should supposedly become guiding documents requiring compliance of member states, that is, behavior that does not contradict those resolutions.

Meanwhile, Russian TV channels conveying state propaganda broadcast in Uzbekistan cannot but affect social moods and public opinion as well as the government’s activities. Indeed, the Ukrainian Embassy in Tashkent requested the Uzbek government to block the Russian propaganda channels, but this has not happened so far. As a result, the TV audience in Uzbekistan, especially in the provinces, receives one-sided and therefore biased information about the war in Ukraine. The issue of blocking Russian propaganda has become salient in other Central Asian countries as well. Moreover, a taboo has been established in Uzbek TV against emphasizing and discussing the war in Ukraine.

At the same time, Uzbekistan has become an attractive destination for thousands of Russian businessmen, IT specialists, companies and others who leave their country, given the worsening conditions for their businesses. Uzbekistan does maintain economic cooperation and business ties with Russia, despite the risk of being targeted by secondary sanctions. Thus, while Uzbekistan understands the tragedy of Ukraine, it does not want to sacrifice its cooperation with Russia.

At the same time, for Uzbekistan and other Central Asian countries, the issue of diversifying foreign trade and transport corridors has become more urgent than ever before. These countries will most likely make more active efforts to develop transport and overall connectivity projects with the South Caucasus and South Asia. Undoubtedly, these efforts will challenge Russian geopolitical interests in an area that Moscow considers its sphere of exclusive dominance and control.

Currently, it is obvious that states in the former Soviet space can take a relatively neutral position on the situation in Ukraine and that Moscow accepts this position as minimally admittable. However, when any of these states take a relatively independent and critical position, it immediately becomes the target of aggressive information attacks, as was the case for example with Azerbaijan, Moldova, Kazakhstan and Uzbekistan.

Another aspect of this issue is that Uzbekistan and other Central Asian states, unfortunately, did not commit to their own Joint Statement from the last Consultative Meeting in August 2021 about their will to coordinate international activities. This intention of coordination – officially declared yet unfulfilled in practice – is one of the most essential preconditions for an internationally stronger Central Asia, the absence of which still keeps Central Asians self-restrained and cautious in terms of making bolder decisions and steps, in particular, in the context of the war in Ukraine.

Uzbekistan experiences what can be called a “curse of positioning.” Its mere expression of its position on the issue, consisting of statements and words, not yet actions, already cause nervous and painful reactions on the part of the sides involved. Uzbekistan thus finds itself squeezed between Ukraine, Russia, the U.S./EU/NATO, and the UN.

Moreover, Uzbekistan has established strategic partnerships with a number of powers, including Russia, China and the U.S., and the contents of these agreements differ from each other. The current situation in Ukraine and the resulting reshaping of the world order will certainly require revisions of the modality of existing strategic partnerships, based on consideration of which ones are actually strategic.

CONCLUSIONS: The outcome of the war in Ukraine will not only decide the fate of that country’s independence; it also tests the independence of other former Soviet republics. In other words, the real struggle for independence has just begun, 30 years after it was formally gained. The ability and will of these republics to stand with the international community is under strain.

The war is also a test for Central Asian unity. The “curse of positioning” revealed the self-perception of these states as weak and humbled vis-à-vis great powers, especially the geographically nearest one: Russia. The self-imposed “complex of a weak state” not only limits their freedom of maneuver on the international arena; it also creates moral and normative challenges for their domestic and foreign policies.

In this context, Central Asian states need more resolute support from democratic powers and international organizations. Ukraine, Moldova, Georgia, and even Azerbaijan and Armenia are Europe-oriented countries and most of them count on EU and NATO support. But who will support Central Asian countries?

By and large, the war in Ukraine and the unprecedented sanctions imposed on Russia, coupled with the UNGA Resolutions will most likely incentivize Uzbekistan and other Central Asian countries to rethink their overall relationships with Russia. This is not least since Moscow itself will seek to rethink and reconstruct its relations with its former satellites. Uzbekistan cannot continue its relations and cooperation with Russia without taking due account of the war in Ukraine and the long-lasting consequences of this war. Finally, the question arises as to what should be done if the strategic partnership objectively ceases to function in its full capacity and intent.

More in this category: « Russia-Kazakhstan dynamic in the context of European energy and economic security Iran and the Ukraine Crisis: Complexities and Considerations »
back to top