On November 19, 2021, the South Ossetian de-facto State Commission for the Border with Georgia published its work, concluding that de facto South Ossetia had lost about 200 square kilometers to Georgia. This statement fueled a political crisis in the separatist region as local opposition sought to impeach de-facto president Anatoly Bibilov. Most experts studying these developments focus on their domestic roots and impacts. However, analysis of the Commission’s territorial claims in the context of the continuous borderization of the Georgian-Ossetian Administrative Boundary Line (ABL) and the creeping annexation of Georgian territory by Russian forces also indicates another possible dimension of this development: coordination between Tskhinvali and the Kremlin to annex stripes of land with military-strategic importance. 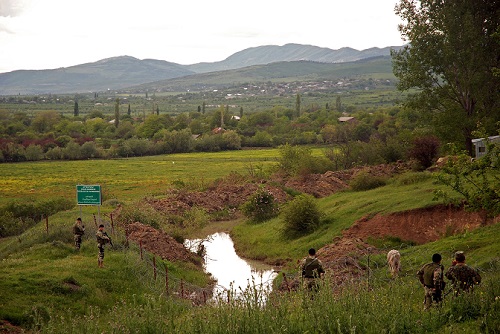 BACKGROUND: The commission based its assessment on the “Decree No. 2 of the All-Georgian Central Executive Committee of the Soviets and the Council of the Peoples Commissars of the Georgian SSR of April 29, 1922.” The South Ossetian opposition used the commission’s conclusions to attack South Ossetian de-facto President Bibilov. They claimed that the draft law submitted by Bibilov to the legislature in 2019, which did not pass, would have approved the de-facto state border and thus resulted in giving up claims on 200 square kilometers of territory to Georgia proper.

Bibilov objected to the findings of the commission, which he himself established in 2019, stating that Decree No. 2 is irrelevant to the de-facto borders of South Ossetia. According to him, the region entered the USSR with the current de facto borders, within which Russia also recognized it in 2008. Bibilov also stressed that while recognizing de facto borders as stipulated in the 1922 decree would add 200 square kilometers of primarily uninhabited and mountainous territory, it would also deprive the separatist region of smaller but populated and fertile territory, including several villages.

However, these arguments failed to convince the local opposition led by the Nykhaz and Peoples Party, which sought to launch an appeal against Bibilov on January 19. However, only 13 deputies out of 34 in the de-facto parliament backed the motion. The dispute may nevertheless become decisive in determining the outcome of the forthcoming presidential elections, scheduled for April 10, 2022.

Even a possible victory for Bibilov and his conception of the de facto borders of South Ossetia, which are derived from the borders of the South Ossetian Autonomous Region (SOAR), would not mean the end of border disputes and ambiguities. As was the case with several autonomous regions in the former USSR, SOAR did not have precisely demarcated borders. In addition, the de-facto boundaries of SOAR changed regularly depending on how local collective farms exchanged or donated their lands. There are, therefore, a large number of conflicting maps of SOAR. As a result, Russia frequently makes territorial arguments using a combination of several local maps from different periods, maximizing the area of SOAR into a form that never existed in reality.

Under these circumstances, Moscow successfully continues its policy of borderization and creeping occupation of territories on the Georgian side of the ABL. Since its inception along South Ossetia’s ABL, Russian border guards have already borderized and annexed over 53 square kilometers of territory.

Although most analysts focus on the commission’s conclusions in the context of domestic politics in de-facto South Ossetia, an analysis of the so-called fear zones, identified by the Georgian organization De-Occupation Movement, also suggests a second possible dimension to the issue.

IMPLICATIONS: The term “fear zone” refers to territories formally located on the Georgian side of the ABL with South Ossetia, which locals and security forces do not enter for fear of being detained by Russian border guards. Although fear zones are not officially recognized or mapped, they are important in strengthening Russian influence in the region and improving its military-strategic positions. There is empirical evidence that Russia is building its military infrastructure in already established and long-standing fear zones, thus de-facto annexing them in practice. In some cases, Russia has annexed fear zones on the Georgian side of the ABL by constructing fences.

An analysis comparing pre-existing fear zones, including those where Russian border guards have already begun the borderization process, with the territories claimed by the commission shows a significant degree of overlap.

West of the ABL, the area claimed by the commission correlates almost precisely with the fear zones near the town of Iri, the village of Perevi, in the Chonto valley and the northwest of the Chorchana forest. Even before the commission published its conclusions, Russian border guards annexed and fenced off the fear zone near the village of Perevi.

The densely populated southern side of the ABL also displays a significant match between claimed areas and fear zones, although claimed areas are usually 50 percent larger than the established fear zones. The reason is that the ABL often runs just in the outskirts of Georgian communities, and fear zones expand much slower into populated areas than uninhabited regions. Several areas claimed by the commission include parts of local villages.

Along the eastern part of the ABL, the claimed territory overlaps with existing fear zones only in the south near the village of Gremiskhevi and in the far north in the Truso Valley. Fear zones have not generally appeared here, as the ABL runs along ridges of high mountains. However, several of the commission’s claims extend deeper into territory under Georgian control. In January, the De-Occupation Movement noted possible activity of Russian border guards around the Lomisa Church. If this information is confirmed, it would be the first such incident in this location.

CONCLUSIONS: Although the commission’s conclusions have primarily been interpreted as part of an internal political struggle in the separatist republic, the comparative analysis of territories newly claimed by the commission and the fear zones created or already annexed by Russian forces in recent years, indicates possible synchronization between Moscow and political forces in Tskhinvali.

Therefore, even though the Kremlin’s actual intentions remain uncertain, territorial claims raised by the commission deserve attention not only as a domestic issue in de-facto South Ossetia. If the claimed territories were borderized, this would not only constitute the most extensive peacetime annexation of territory along the Georgian-Ossetian ABL. Russian forces would also gain access to several strategic heights and some strategic communications on the western and eastern part of the ABL (primarily the road between Gomi-Sachkhere and E 117). Along the southern part of the ABL several Georgian villages would lose access to most of their fields and orchards. This would effectively cripple the economy of these communities, leading to depopulation at an increased pace. Nearly half of the 67 villages officially recognized as “located on the occupation line” would be affected.

Control of these territories (“legalized” by the commission) would provide Russian forces with much better positions from a military point of view, along with tools for exerting additional pressure on Tbilisi by endangering several strategic communications.

Finally yet importantly, the international dimension of the possible borderization and annexation of newly claimed areas must not be forgotten. Activities by Russian border guards to annex given territories could also aim to discredit the European Union Monitoring Mission, which many Georgians expect to prevent such acts.

AUTHOR’S BIOS: Tomáš Baranec is a Research Fellow and Head of the Caucasus Program of the Slovak think tank Strategic Analysis. He currently works as a field-researcher on the Georgian-Ossetian ABL. Giorgi Bilanishvili is a Research Fellow at the Georgian Foundation for Strategic and International Studies. He has previously worked at the Office of State Security and Crisis Management Council as Director of External Security Department, and at the Analytical Directorate of the Intelligence Service of Georgia. David Katsarava is the founder and leader of the anti-occupation movement Power in Unity. He is conducting longitudinal field research and monitoring on the Georgian-Ossetian ABL.  Lana Ghvinjilia is managing board member of the Power in Unity NGO and founder and director of the Populus Rei, and a Lecturer at Ilia state university. The article was written as part of the project “Development of communities along the administrative borderline separating the Tskhinvali region from the rest of Georgia, emphasizing local self-government development,” funded by SlovakAid and is implemented by the Slovak NGO Mesa 10 in partnership with the Georgian NGO Bridge of Friendship “Kartlosi.”

More in this category: « Did Cryptocurrency Miners Crash the Central Asian Power Grid? Traversing Xinjiang: A Chinese Colonial Space »
back to top