Iran and South Caucasus Railway Connections after the Nagorno-Karabakh War

After the Second Karabakh War, the tripartite ceasefire agreement on November 10, 2020, opens a possibility for Iran to become connected to the southern railway network in the South Caucasus. As a result of the First Nagorno-Karabakh War, an important part of the South Caucasus Railway, which passed through the Nakhichevan region, Syunik Province in southern Armenia, and Jabrail, Fizuli and Zangilan regions in southern Azerbaijan, was destroyed or removed from communication routes. As a result, unlike Turkey and Russia, Iran has no rail connection to the Caucasus. 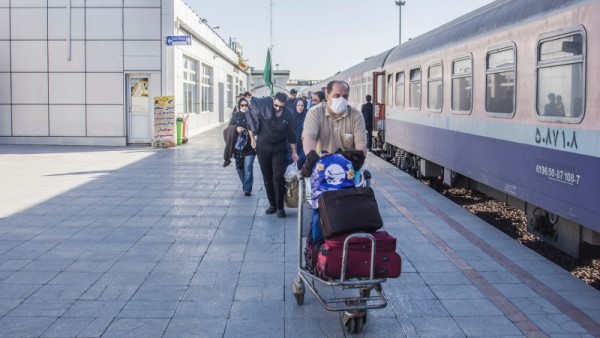 BACKGROUND: During the 1930s and 1940s, the Soviet Union built a railway connection between Baku and Nakhichevan through Armenia’s Meghri region, running parallel to Iran’s border. The Iranian railway connected in Julfa District of Nakhichevan through the city of Jolfa in East Azerbaijan Province in northwestern Iran. In 1990 and 1991, the volume of cargo exchanges through the Jolfa border amounted to 2.69 and 2.37 million tons respectively, amounting to over 10 percent of Iran’s imports. After the First Karabakh War, the regions of Fuzuli, Jabrayil and Zangilan near the Iranian border came under Armenian control and the railway connection between Nakhichevan and mainland Azerbaijan was severed. While the northern railways from Armenia to Georgia and Azerbaijan to Russia continued to operate, Iran’s railway connection with the Caucasus was cut and cargo exchanges through this border dropped sharply.

The November 10, 2020, tripartite ceasefire agreement concluding the Second Karabakh War stated that “All economic and transport links in the region shall be unblocked”, raising expectations that after three decades, the deadlocks created in the transportation system of the region, especially the railways, will be removed. This will provide Iran with an opportunity to connect to the railway network of the South Caucasus.

Before the 2020 Karabakh War, two important efforts were made to connect Iran with the Caucasus via rail. The first was an attempt by the governments of Russia, Iran and Azerbaijan within the framework of the International North–South Transport Corridor. The three parties signed an agreement on constructing the route in 2005, building on a Soviet extension of the railway southwards to Astara in Azerbaijan, at the southern border with Iran. In order to establish rail contact, it was necessary to build a railway from Astara to Rasht and Qazvin in Iran. While the Rasht–Qazvin section opened on 22 November 2018, the Rasht-Astara section is still under construction and will cost US$ 500 million. The sanctions imposed on Iran by the U.S. during the Trump administration have played an important role in slowing down the project. Under the Biden administration, Iran, Russia and Azerbaijan all hope that the U.S. will return to the Joint Comprehensive Plan of Action (JCPOA) and lift financial and banking sanctions on Iran, allowing the implementation process of the Rasht-Astara railway to accelerate.

A second attempt to establish a railway connection with Iran was made in 2009, when Armenia and Iran signed an agreement to construct “the Southern Armenia Railway” that would connect Yerevan and Tabriz via Syunik. The railway line has a total length of 470 kilometers and its construction will cost an estimated US$ 3.5 billion in total, which is comparable with Armenia’s annual budget. The project has not been implemented, due to limited financial resources as well as political will. In recent years, the Armenian government has sought to involve China in financing the railway project within the framework of the Belt and Road Initiative (BRI). These efforts have nevertheless yielded no clear results.

IMPLICATIONS: After the Second Karabakh War, a new opportunity has emerged to connect Iran’s rail network to the Caucasus, by reviving the old Soviet-era connections in the Nakhichevan region and along Armenia’s and Azerbaijan’s southern borders. The ninth point of the ceasefire agreement between Armenia, Azerbaijan and Russia calls for regional transportation links to be “unblocked,” and more specifically stipulates that new infrastructure will link Nakhichevan with mainland Azerbaijan. While the three sides are working out the exact details, Azerbaijan is already forging ahead with a new rail link to the Armenian border. The new route will relieve Baku of the ordeal of reaching its disconnected western exclave via an 840-kilometer detour around Armenia through Georgia and Turkey.

The revival of the Soviet-era railway will provide Iran with two rail routes, both starting from Jolfa city in East Azerbaijan Province in northwestern Iran and Julfa District of the Nakhichevan Autonomous Republic of Azerbaijan. The first route (south-north) is the Jolfa railway connection to Nakhichevan and then Yerevan and Tbilisi. The second route (west- east) runs from Jolfa to Nakhichevan and then crosses the southern borders of Armenia and Azerbaijan to Baku and from there to Russia. In Julfa, Nakhichevan, the railway route is divided into three parts: south to Jolfa in Iran, west and north to Yerevan, and east along Armenia’s southern border towards Azerbaijan.

After the ceasefire, Tehran has been quick to articulate its support for the Nakhichevan connection. According to Foreign Minister Mohammad Javad Zarif, “The re-opening of the Julfa-Nakhichevan railway line is necessary for Iran’s access to neighboring countries and the Eurasian market.” The Managing Director of Iran Railways, Saeed Rasouli, visited Yerevan on May 29, 2021, and announced that the completion of the western part of the corridor will connect Iran to the Black Sea and Russia via Jolfa, Nakhichevan, Armenia, and Georgia. Indeed, he emphasized that reconstructing the Jolfa-Armenia railroad will pave the way for a Caspian–Black Sea Transit Corridor in the near future, and that a memorandum of understanding was signed between Iran and Armenia so that the two countries can exchange tariff information to reach an executive plan to start the exchange of rail freight as soon as possible. Rasouli and Iran’s Transport and Urban Development Minister Mohammad Eslami also visited Nakhichevan as well as Baku, where they emphasized that existing infrastructure can potentially join Nakhichevan to the rest of Azerbaijan Republic, while the Tabriz-Nakhichevan railway can be revived and extended to Tbilisi, as well as the possibility of constructing a railway from Nakhichevan to Kars in Turkey.

Despite Iran’s interest, there are serious obstacles to reviving the Soviet-era railway. Despite Nikol Pashinyan’s victory in Armenia’s June 20 parliamentary elections, the country’s position on implementing the Nakhichevan corridor to Azerbaijan remains ambiguous, while funding remains uncertain for the reconstruction of war-damaged railways in the regions of Fuzuli, Jabrayil and Zangilan near the Iranian border, which the southern railway route passes through.

This author visited the Aghdam region on April 12, 2021, and witnessed the condition of the railway network in this area, which is unusable and needs to be completely replaced. Some Iranian experts are also concerned that a revival of the Soviet-era railway will sideline the Rasht-Astara railway project. Azerbaijan’s Minister of Foreign Affairs Jeyhun Bayramov, however, has stated that his country needs both the Soviet-era railway and the Rasht-Astara project.

CONCLUSIONS: If paragraph 9 of the Nagorno-Karabakh ceasefire agreement is implemented, a very important change will take place in the Caucasus region. Reviving the Soviet-era railroad in the region could help the region converge and play a reconciliatory role between Armenia and Azerbaijan. Iran’s connection to the South Caucasus railway network after three decades can help the process of integration, complete the north-south corridor and allow for the introduction of a 3 + 3 (Iran-Russia-Turkey + Armenia-Azerbaijan-Georgia) regional cooperation model in the South Caucasus.

Dr. Vali Kaleji is an expert on Central Asia and Caucasian Studies in Tehran, Iran.

More in this category: « U.S. out, Taliban in: Central Asia Facing New Challenges from Afghanistan New Tensions Rising along Armenia-Azerbaijan Border »
back to top