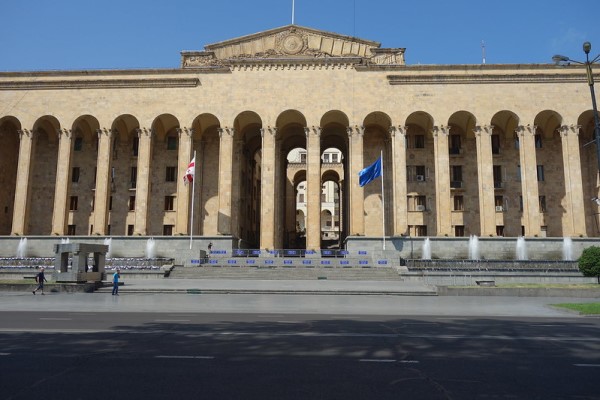 BACKGROUND: A fresh crisis hit Georgia’s political life in February, sparked by Tbilisi City Court’s verdict on Melia, exacerbating the already tense relations between the ruling party and the opposition following the October 2020 parliamentary elections, which opposition parties claim were fraudulent. The ruling GD won the elections for the third time in a row, however, the opposition rejected the official results due to a large number of irregularities during the vote. While domestic and international electoral watchdogs did register a large number of violations, international observers nevertheless asserted that despite these shortcomings, the violations did not undermine the legitimacy and results of the elections. These assessments did not convince the opposition. Hopes were high that a new electoral framework and widespread dissatisfaction with GD’s rule would oust the ruling party from power or, at least, pave the way for a coalition government.

Opposition parties rejected the results of the first election round and decided to boycott the run-offs taking place in November, which the ruling party won decisively. Amid calls to repeat the vote, all eight opposition parties that won seats in the new parliament (with a few exceptions) pledged to refuse their mandates. However, GD nevertheless decided to recognize the new legislature unilaterally.

The U.S. and the EU have sought to persuade the ruling party and opposition to compromise for months but nothing has so far come out of these negotiations. The opposition demanded not only snap elections but also the release of Giorgi Rurua. Rurua, the founder and co-owner of the pro-opposition television channel Mtavari Arkhi was sentenced last year to four years in prison in a case that many opposition representatives have denounced as politically motivated. So far, the ruling party has rejected these demands.

Melia’s controversial detention has enflamed the conflict between Georgia’s political factions and given the UNM a much-needed boost. The party received the opportunity to raise its popularity by accentuating its victimhood to a government crackdown, and to draw the attention of Georgia’s Western partners. Especially given the legal flaws of Melia’s case, his detention has aggravated the political turmoil at a very inopportune moment when Georgia is going through a serious health and economic crisis. GD has shown little interest in compromise, despite the fact that the current political impasse complicates Georgia’s recovery from the pandemic and harms its international reputation. The road to consensus in the current political climate will be a rocky path since both GD and UNM have gradually become dominated by hardliners and party loyalists, sidelining politicians willing to look beyond party politics.

IMPLICATIONS: Melia’s pretrial custody was ordered after he refused to pay the full bail amount, which was increased after he publicly removed an electronic monitoring bracelet during a post-election protest in 2020. The legislature, which is dominated by the ruling party, had previously stripped Melia of his parliamentary immunity, allowing for his arrest.

Melia and a number of other opposition politicians have been charged with incitement of violence during the street protests in 2019, charges that he rejects as politically motivated. In June 2019, protests erupted following a Russian lawmaker’s visit to Georgia’s parliament, and turned into clashes with the police when demonstrators attempted to storm the parliament building.

The enforcement of the court ruling sparked fierce disagreements among GD top politicians, unexpectedly leading to Prime Minister Gakharia’s resignation. In a media statement, Gakharia attributed his resignation to the lack of consensus with his party colleagues over the detention of UNM’s chairman, which according to him would cause political and social risks. Gakharia himself was accused of ordering a violent crackdown during the June 2019 protests when he served as Interior Minister. For this reason, the opposition as well as many ordinary Georgians fiercely protested his subsequent appointment as Prime Minister. Yet, Gakharia’s approval ratings significantly improved during the first wave of the coronavirus pandemic in spring 2020, likely due to the government’s successful early response, which curbed the negative health and economic effects of the first wave.

The former PM had a particularly strong disagreement with Interior Minister Vakhtang Gomelauri over the use of the ministry’s Special Forces during the planned detention. Gomelauri is one of GD founder Bidzina Ivanishvili’s close associates, which according to analysts confirms that a conflict between Ivanishvili and Gakharia has been unfolding in the past few months.

Gakharia was swiftly replaced by former Prime Minister and most recently Defence Minister Gharibashvili, another close confidant of Ivanishvili. Gharibashvili is known for his combative approach to the opposition and his appointment is a clear signal that the ruling party moves towards confrontation rather than de-escalation.

Unsurprisingly, one of Gharibashvili’s first decisions was to authorize a special operation to arrest Melia, which he praised as “execution of the law.” Melia was detained during a particularly dramatic police raid on the UNM’s headquarters in Tbilisi, where riot police entered the party’s offices through an upper window and used force against opposition activists who were gathered in the building. In a reaction to the raid, opposition activists and many ordinary Georgians, counting in the thousands, took to the streets of Tbilisi on February 26 to protest Melia’s arrest and call for snap elections in a demonstration organized by six opposition parties. Georgia’s Western partners also condemned the crackdown on the opposition, criticizing the government’s use of force and harsh, polarizing rhetoric towards its political opponents.

Georgia’s crisis has drawn a response from the EU, which has sought to facilitate dialogue between the rival political factions. European Council President Charles Michel spearheaded the negotiations, which were relaunched in the beginning of March. Yet neither the ruling party, nor the opposition have shown any openness to revising their maximalist positions. The opposition, and particularly UNM, still demands the release of all political prisoners, including Melia, and to hold early elections, which GD deems unacceptable. Predictably, this round of Western-sponsored mediation efforts to end the political crisis in Georgia failed on March 19, as did the previous attempts. Details of the latest negotiations have not been publicized but the mediation likely failed because GD did not agree to hold snap elections and release all political prisoners including Melia, which were the opposition’s main demands. As a result, the opposition warned of switching into “emergency mode” and holding a large-scale protest on May 15.

CONCLUSIONS: The conflict between rival political factions threatens to harm Georgia’s vital interests and destroy its international reputation. However, at this point, after months of failed negotiations it is clear that neither the ruling party, nor the opposition is willing to search for possible compromises. Moreover, hardliners dominate both GD and UNM, which does not bode well for the outcome. Adding fuel to the flames, on March 6 GD-critical independent television channel Pirveli released recordings of alleged conversations between Bidzina Ivanishvili’s son Bera Ivanishvili, current Prime Minister Gharibashvili, and the head of the special state security service Anzor Chubinidze. In the taped conversations recorded a few years ago at an unspecified time, Bera Ivanishvili apparently demands from Gharibashvili and Chubinidze, both close confidants of his father, to retaliate against a young man for social media posts critical of Ivanishvili's son. The unauthorized recordings has caused a scandal in Georgia since it appears to confirm widespread allegations against the GD government’s rule as based on state capture and undue influence of informal networks.

More in this category: « Azerbaijan and Turkmenistan Agree on the Caspian Nagorno-Karabakh: The Democratization of Precision Strike and the Viability of Military Power »
back to top