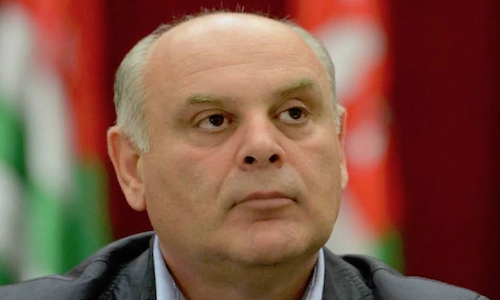 BACKGROUND: Russian-occupied Abkhazia held presidential elections on March 22, with a turnout of 71 percent according to the released figures. Up to 100,000 people participated in the elections where Aslan Bzhania, a long time opposition figure in Abkhazia, garnered most of the votes. The elections followed a wave of protests from early January when hundreds of protesters gathered in front of the presidential building, which then housed Raul Khajimba. On January 9, demonstrators stormed the government administration building, which eventually led to Khajimba’s resignation on January 13. Moscow was instrumental in the political transition process, with Russian President Vladimir Putin’s longtime Kremlin aide Vladislav Surkov travelling to Abkhazia and facilitating the transfer of political power from Khajimba.

An event equally important to internal Abkhaz politics was Surkov’s resignation in late January. Surkov was responsible for orchestrating policies in Ukraine’s Donbas and no less importantly in Abkhazia as well as Georgia’s other Russian-occupied region, South Ossetia.

Khajimba was closely linked to Surkov. The latter’s resignation fits into the growing discontent in Moscow over the decrepit state of affairs in Abkhazia. Surkov became more involved in Abkhazia’s politics after 2012 when he made frequent visits to the region. The Kremlin’s policies in Abkhazia were to a large extent constructed around Surkov’s personal contacts, which he had accumulated over several years of service. An Abkhaz president would inevitably be a man of his choice. This was the case with Khajimba, whose demise reflected problems with Surkov’s management style and Russia’s overall troubled position in the region.

IMPLICATIONS: Recent political developments in the separatist region fit into the overall instability in Abkhazia. However, several interesting trends indicate that the political differences between Sokhumi and Moscow are now deeper than ever before. Statements by several prominent Abkhaz politicians also indicate that Sokhumi has become more open to the idea of conducting direct negotiations with Tbilisi.

Most importantly, the election of Bzhania is not a direct reflection of Russia’s preferences. Indeed, Bzhania has been poisoned twice since 2019 and was even hospitalized in Moscow in a critical condition in April last year. He was then poisoned a second time just before the March elections, which has given rise to speculations on the Kremlin’s involvement and tensions between Bzhania and Moscow.

Moreover, Bzhania’s vision for Abkhazia is not compatible with Moscow’s interests in the South Caucasus. The thinking among Abkhaz politicians regarding relations with the government in Tbilisi is gradually changing. Direct negotiations with Tbilisi has long been a taboo policy issue in Abkhazia. However, Bzhania has made statements that markedly differed from the traditional line: “whether we [Abkhazians] like it or not, Georgians and the Georgian state are our neighbors. Whether we like it or not, we have a lot of contacts at the level of Georgian and Abkhaz citizens. These are the people who cross the border.” This sentiment is seemingly not limited to Bzhania. Sergey Shamba, another Abkhaz politician, has long been advocating a normalization of relations with Tbilisi in one way or another. This could indicate that a certain scope for direct talks with Tbilisi is emerging.

Bzhania has also suggested introducing a new platform for negotiations with Tbilisi. This would potentially serve as a viable mechanism for solving various security problems that consistently arise and need to be addressed jointly with the government in Tbilisi. The Geneva format, which is the only existing negotiation platform, has failed to produce desired results for Tbilisi and Sokhumi. Thus, Bzhania’s statement marks an important change in Abkhaz political rhetoric.

Other long-term problems have likely influenced this evolution of political thinking in Abkhazia. The region has failed to gain wider recognition of its “independence.” Aside from Russia, only a few small states have so far recognized the region and the long-term prospect for improving the situation is glim. In addition, the region is continually beset by deep economic problems and the forecast is negative since the EU, the U.S. and other global or regional actors avoid economic engagement with the region in support of the Georgian government. More significant, however, is the official U.S. policy of refusing any financial assistance to countries supporting Abkhazia. Under these circumstances, the region’s economic outlook is unlikely to improve in the coming decades, which will further exacerbate the existing social tensions and an already large outflow of youngsters. These long-term political and economic prospects have likely influenced the thinking in Sokhumi.

Yet the more direct and emerging trend is the deterioration of Abkhaz-Russian relations, which has led Abkhaz politicians to reconsider long-established policies. Moscow is discontent with the management of Russian financial aid in the region. Occasional statements and comments from Kremlin-linked Russian pundits indicate the essence of the problem: the Kremlin worries about the increasingly predatory economic behavior on part of the Abkhaz political elite. Few efforts are made to improve the economic and security situation in the region, as shown by a growing number of murders of Russian nationals over the past several years. Every level of the Abkhaz administration demonstrates persistent and widespread corruption. Russian politicians have also voiced objections to the consistent refusal of the Abkhaz government to allow purchases of land by Russian citizens. The prospect of land sales has occasionally caused outbursts of public protests in Sokhumi and constitutes a further dividing line between the separatist regime and its patron.

This provides room for a tentative and limited rapprochement between Sokhumi and Tbilisi. However, Russia’s overall geopolitical influence over Abkhazia will prove decisive. The region will continually be an integral part of Moscow’s efforts to limit Georgia’s ambitions for NATO and EU membership. Russia currently deploys nearly 5,000 troops in Abkhazia. This not only assures the region’s security; it also solidifies Russia’s geopolitical influence in Abkhaz politics. Russian financial aid will remain the single most important source of income for Abkhazia and this dependence will serve to keep the region firmly under Russian control. In addition, a majority of Abkhaz deeply distrust the Georgian government. The fact that most Abkhaz have little, if any, knowledge of the Georgian language further distances the region from the rest of Georgia, making language an additional instrument of Russian soft power.

CONCLUSIONS: A certain room for potential compromise between Sokhumi and Tbilisi is emerging. The thinking among Abkhaz politicians is undergoing an interesting evolution, presenting the government in Tbilisi with a rare opportunity for dialogue. Statements on the need to establish a one-to-one discussion platform with Tbilisi indicate a change in Abkhaz politics. However, while this may induce steps from Tbilisi and Sokhumi towards creating a new negotiation platform, real progress will likely remain elusive. Abkhazia’s dependence on Russian military and economic aid will constitute a significant obstacle in this regard. Yet at the same time, the rift between Abkhazia and Russia continues to grow over long-term problems relating to the ineffective spending of Russian money and the deteriorating condition of Abkhazia’s economy.