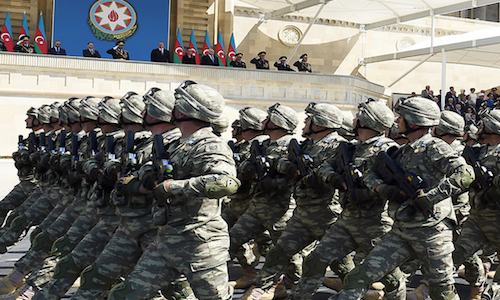 BACKGROUND: Several local small and medium-size enterprises (SME) displayed their products during the recent ADEX 2018 defense exhibition in Baku. While at an embryonic stage of their development, this trend of local defense industry SMEs is unprecedented. The Ministry of Defense Industry needed a better structure to adapt to this new reality. The ministry has over 15 plants producing armored vehicles, light weaponry, ammunition, drones and other support equipment both for civilian and military needs. Since its inception in 2005, the ministry has been successful in developing light weaponry models, including highly successful sniper rifles, and assault weapons that have been sold both abroad and domestically. Yet the ministry lacked strong ties with the private sector in areas where it needed expertise, ability to attract investment, modern research and development infrastructure, modern infrastructure to adequately assess the needs of Azerbaijan’s armed forces, and most importantly, strong coordination between its key assets – plants as well as research centers.

The new Azersilah is designed to overcome these hurdles. However, the company will face multiple problems in developing new portfolios. The lack of expertise in key high-skill areas and a nation-wide education program for modern defense industry needs are among general barriers to effective industry growth. Among these areas are government-backed/armed forces-led tailored talent management programs; and collaborative platforms connecting the defense industry with academia and vocational education. According to retired Colonel and military expert Shair Ramaldanov, the new corporate form of the ministry will allow the government to sell shares in Azersilah in order to attract investment.

The education reform roadmap adopted in 2016 emphasized the importance of vocational education and its links to industries and businesses, however, there is still significant room for improvement. The European Defense Agency has identified several areas of expertise as vital for the defense sector in general, including systems engineering, software engineering, project management, and mechanical engineering technicians. These areas include sub-fields such as optics, robotics, software development and sensors, where Azerbaijan stilllacks relevant expertise.

IMPLICATIONS: One of the government’s key goals with reforming the ministry and changing its legal status is to introduce corporate governance to the entity. This will enable Azersilah to make quicker decisions on investment, partnerships and commercial activities,and to run the entity based on a viable business model rather than like a government agency. The government also expects to bring financial stability to Azersilah by optimizing existing platforms for manufacturing, restructuring its debts, and introducing new portfolios.

In order to attain financial stability and start accumulating knowledge, a possible new initiative by Azersilah could be to set up an R&D center based on private sector practice. This could help in identifying existing gaps in the portfolios of other former Soviet defense industry giants, in order to develop niche capabilities for serving mechanized armies in the Asian, African and Latin American markets. Azerbaijan has a potential for increasing its production output of soviet-era ammunition, utilization infrastructure, support military accessories, maintenance services and other supporting equipment. Another area is to explore the civilian light weaponry and ammunition markets.

Azersilah’s role, however, is not only adaptation to new market challenges to offer new products or upgrade its output capacity. A highly debated market consolidation is another milestone that Azerbaijan’s defense industry might want to attain. This includes consolidation of both Azersilah’s assets and the private contractor market. Market consolidation entails mergers and acquisitions of smaller companies by larger ones. Azersilah can play a central role using its capacity as a potential customer in this process by identifying areas where it could cooperate with newly formed companies.

Most private companies engaged in Azerbaijan’s defense industry are part of the government-sponsored technological parks, which gives the government a strong negotiating position. There are reasons to believe that higher profitability from increasing concentration may bring stronger operational capacity. Market consolidation, corporate management and a flexible legal entity could bring many advantages for Azersilah. Reasons to support stronger market concentration under Azersilah include utilities, where the entry of additional firms would entail an expensive build-up of distribution infrastructure like pipes or electricity lines. Currently, utility prices is one of the major obstacles to competitive defense industry product prices. Moreover, a higher industrial concentration would bring economies of scale, allowing per unit production costs to drop as output rises. In this case, a smaller number of defense industry companies can operate more efficiently and can boost their sales through lower prices for their output, which fits well with Azerbaijan’s economic diversification plans.

Given that Azerbaijan’s defense industry is relatively young and still at the stage of searching for its niche, its main customer remains the government of Azerbaijan. In this case, as a corporately managed government entity, Azersilah can play a significant role in shaping the industry’s size, structure, expertise and economic viability for future optimization to sell internationally. Azersilah can also play a role in shaping the learning environment in the country’s defense market by establishing stronger ties with international partners for expertise transfer, joint research and production projects. Azerbaijan successfully cooperates with a number of Turkish, Israeli, Russian and Belarusian firms in this area. New technological challenges and security risks demand even further diversification of Azerbaijan’s defense portfolio and at this stage the combination of corporatization with market consolidation can contribute to a better shaping of the industry, boosting the learning environment for SMEs and diversifying existing portfolios.

Enhanced market consolidation may negatively affect competition and reduce the number of key supplies. Yet such consolidation can facilitate better SME performance through economies of scale and learning curves. Private company growth in expertise and output capacity is key to Azerbaijan’s defense industry, which is in strong need of reducing its dependency on imported supplies that drive up its final product prices. A full supply, production and sales chain needs to be established through stronger ties between state-owned enterprises and the private sector. Azersilah and its corporate management also paves the way for international firms to enter the Azerbaijani market and seek opportunities for joint projects that have not previously existed in Azerbaijan.

CONCLUSIONS: Azersilah is an entity yet to be fully reformed through deep asset evaluation, business process auditing, financial audits and a final determination of its major portfolios. The key to corporatization of Azersilah will be the identification of government assets that are open for private sector investment. Ideally, as a reformed state-owned defense enterprise, Azersilah will be a corporately run, regulatory body in the defense industry with strong R&D capabilities and ties to private sector expertise, both international and domestic. If Azersilah is reformed as planned, it could become a major catalyst for overall private sector innovation and more dynamic interagency cooperation within Azerbaijan’s armed forces based on constant research and needs assessment. Its strategic value could go well beyond mere economic benefits by boosting thorough technological advancement in Azerbaijan’s security sector.

In Nagorno-Karabakh, trench warfare and the conflict’s low intensity incentivize the two armies to focus on operational issues, rather than tactical or strategic ones. They are also heavily dependent on niche technologies. Computer mapping, unmanned vehicles of various sizes, drones, jammers, optical identification devices, personnel safety equipment andremote controlled weapon systems all require essential skills in optics, hardware as well as software development. Azerbaijan’s lack of expertise in these areas can partially be compensated by private company expertise both domestically and by partnering with international firms. Azersilah should assume the role of a learning environment catalyst if Azerbaijan wants to both increase the profitability of the defense sector and adequately equip its armed forces at a low cost.

Tamerlan Vahabov is an entrepreneur and owner of the Czech Republic and Azerbaijan-based Ivy Group Data Analytics, Government Reform and Education firm.He is a graduate of Georgetown University’s School of Foreign Service and the U.S. Naval Postgraduate School. His work experience includes Interpol General Secretariat in Lyon, France and the Ministry of Foreign Affairs of Azerbaijan.

More in this category: « Central Asian Salafi-Jihadi and Al Qaeda: From Bayat to Global Jihad Why Kazakhstan's Presidential Elections Matter »
back to top