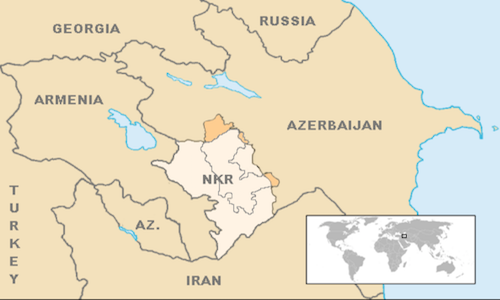 BACKGROUND: In December 2018, Azerbaijan’s President Ilham Aliyev and Armenia’s Prime Minister Nikol Pashinyan agreed to develop mechanisms for preventing ceasefire violations, encouraged by Pashinyan’s earlier statements about his willingness to solve the Nagorno-Karabakh problem through peaceful means. Another meeting in Paris between the two countries’ foreign ministers in January 2019, was also hailed as an effort to reanimate the long-stalled Nagorno-Karabakh peace process. The most recent meeting between the Armenian PM and Azerbaijan’s President – similarly to two previous high-ranking meetings between the two countries – was unplanned and took place during the World Economic Forum in Davos.

While these high-level meetings were off limits to the press, both sides reported that no significant progress was made on the issue of peace talks, and that the purpose of the meetings was to exchange opinions rather than relaunching the negotiating process. However, Azerbaijan released numerous positive statements in connection with the series of meetings, signaling a promising development. On December 18, Azerbaijan’s Foreign Minister Elmar Mamedyarov underlined Baku’s willingness to accept a special status for Nagorno-Karabakh within Azerbaijan and prospects for economic development in exchange for the return of occupied Azerbaijani territories. Since then, high-ranking Azerbaijani officials have released similar statements, causing alarm among Armenian political elites who have accused Pashinyan of possibly making secret concessions to Azerbaijan.

Indeed, the Davos meeting was the fifth high-level contact between the two countries over the past nine months. Although no concrete progress has so far resulted from the increased communication between Azerbaijani and Armenian officials, experts note a decrease in ceasefire violations on the line of contact and improved communication between the armed forces of the two countries. It should be noted, however, that similar moments of rapprochement have occurred previously during the long-lasting Nagorno-Karabakh peace process, including in 2008 after the Russo-Georgian War and in 2016 after the April confrontations. Nevertheless, this time economic and political circumstances in both countries seemingly motivate more hope for progress in the peace talks.

IMPLICATIONS: By the April War of 2016, Armenian-Azerbaijani peace talks had reached a stalemate. In the course of the preceding decade, clashes not just along the Nagorno-Karabakh Line of Contact, but also along the Armenian-Azerbaijani border had increased dramatically, killing dozens of soldiers and civilians annually. A number of clashes can be attributed to Baku’s willingness to periodically use limited force, hitting Armenian positions on the perimeter of the self-proclaimed republic. Thus, Azerbaijan sought to pressure Armenia to make concessions, reminding it of Azerbaijan’s commitment to returning its lost territories either peacefully or by military means. While Baku thereby signaled to Yerevan its refusal to accept the status quo, it also undertook frantic steps on the international scene to ensure that the current state of affairs should not be seen as fait accompli. Indeed, with every passing year, the understanding of the current situation as normal has grown in and outside the region. Baku has therefore grown increasingly skeptical that under current circumstances, the status of Nagorno-Karabakh could be reversed unless Azerbaijan would embark on an all-out war. Even Azerbaijan’s oil wealth, despite its value in the country’s foreign relations, has not in itself brought the objective of regaining Nagorno-Karabakh any closer to realization.

In fact, in spite of the official rhetoric, the rather minor advances of the 2016 war indicated the enormous human cost that a large-scale conflict to regain Nagorno-Karabakh would incur on Azerbaijan. In addition to fighting the well-entrenched positions of the Nagorno-Karabakh-Armenian and Armenian forces in the hills and mountains of Nagorno-Karabakh, Azerbaijan’s military could also face Armenia’s key ally Russia, which would likely take significant steps to protect its remaining client state in the South Caucasus. Baku’s willingness to face a major military and diplomatic conflict, its fiery declarations notwithstanding, has remained limited. Indeed, should the situation on the ground evolve in Azerbaijan’s disfavor in such a scenario, this could lead to the end of the Aliyev regime, with simmering popular discontent reversing against the increasingly authoritarian regime.

In fact, the post-2016 euphoria in Azerbaijani society over its ability to take back occupied land from Armenia has created a push for more action. To feed the increasingly unrealistic demands voiced by the nationalism-imbued population, the Aliyev regime perceives a need to engage in continuous military efforts. Yet the Armenian side’s sense of being on the losing side cultivated after the 2016 war – and its commitment to pay back whenever possible – could spiral into a dangerous escalation leading to a large war.

With the socio-economic situation worsening in Azerbaijan, Baku needs to relocate state funds to appease the public. Despite severe reprisals, protesters have on various occasions taken to the streets, and the extent of the Azerbaijani elite’s fear and paranoia is best illustrated by its treatment of bloggers, journalists, etc. Striking a deal with Armenia could be beneficial for Baku at present.

However, a number of factors will likely challenge the effectiveness of the peace process. As previously, Baku remains persistent that Nagorno-Karabakh will remain part of Azerbaijan, albeit with a special autonomy and self-rule status. Azerbaijan also demands the return of hundreds of thousands of IDPs and refugees to both Nagorno-Karabakh and the adjacent occupied territories. These preconditions remain unacceptable for Armenia, even if the economic embargo is lifted and Armenia’s border with Turkey reopened. Another, albeit lesser, challenge is Pashinyan’s persistence that negotiations must involve the Nagorno-Karabakh government because he, as Prime Minister of Armenia, was neither elected by nor represents the people of Nagorno-Karabakh. This condition is currently unacceptable for Baku, which refuses to recognize the Nagorno-Karabakh government as a legitimate negotiation partner. Another issue that can be expected to hamper the peace process is that both sides have actively used the Nagorno-Karabakh conflict to mobilize nationalist support, which has been employed as a source of regime strength and stability.

CONCLUSIONS: Given these preconditions, rapid progress in the Nagorno-Karabakh peace process remains unlikely as relations between Armenia and Azerbaijan remain defined more by contention than agreement. It is, however, reasonable to expect that the current “thaw” and particularly the unexpected optimism on the Azerbaijani side could lead to a de-escalation at the Line of Contact and the establishment of continuous dialogue and communication between the two countries. This could facilitate a relaunch of peace talks, perhaps in a different format and on different conditions than previous peace efforts throughout the history of the Nagorno-Karabakh conflict. Reshuffles within the Azerbaijani government, such as the appointment of a new head of the Azerbaijani-Karabakh community, Tural Ganjaliyev, suggest that consistent changes are likely to occur in the near future. The election of pro-democratic and forward-looking Prime Minister in Armenia is yet another development that promises a range of new developments on the Nagorno-Karabakh issue. Lastly, the change in Baku’s bellicose attitude and its willingness to “prepare the people for peace” constitutes major progress in terms of post-conflict reconciliation.

More in this category: « Kazakhstan as an Arctic State and a Maritime Power Protecting BRI: China's Foreign Security Concerns »
back to top