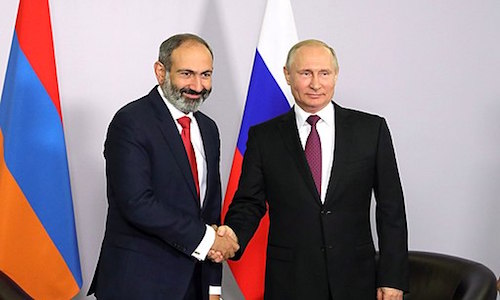 BACKGROUND: It would be erroneous to claim, as some observers have done, that Moscow’s strong influence on Armenia’s security, economy and politics alone ensured its non-interference in the Armenian crisis. A decade ago, when Armenia faced what appeared to be a popular revolt, Russian elites were much more determined to intervene on behalf of the friendly regime should the events have gotten out of control.

Unlike the previous president Robert Kocharyan (1998-2008), Serzh Sargsyan has shunned the use of violence to solve political and personal problems. While Kocharyan did not refrain from using lethal violence on March 1, 2008, when dozens of demonstrators were killed during the process of power transition from Kocharyan to Sargsyan, the latter opposed the use of lethal force throughout the present crisis. Second, the timing the protests played a crucial role as protestors took to the streets on the eve of April 24, which is the Genocide Remembrance Day. Using violence against thousands of demonstrators would certainly have compromised Sargsyan and the regime, inviting the opposition to draw parallels between the Ottoman Empire on the one hand, and the “Turkified” members of the Nagorno-Karabakh clan on the other.

Third, the scale of protests also played a role. Demonstrations were massive, supported by Armenians from all social strata and walks of life. Quelling them would have required massive violence, which would have increased the stakes for both Sargsyan and his regime. Fourth, the Armenian Diaspora overwhelmingly shared a highly critical opinion of the Sargsyan regime, considering his government corrupt, unprofessional and responsible for the mismanagement of Armenia in the past decade. Fifth, in 2008 Levon Ter-Petrosyan led the protests and a considerable part of the population and Diaspora considered him to be the wrong person to head the nation due to his efforts to reconcile Armenia with Azerbaijan and Turkey at the expense of concessions in Karabakh. Hence, many Armenians inside as well as outside the country considered Ter-Petrosyan to be a “national traitor”. With the Karabakh conflict resolved, Moscow might effectively have lost its leverage on Armenian elites.

Sixth, Armenia’s current political and particularly economic elites are divided, with part of the independent or semi-independent oligarchy reluctant to side with Sargsyan. During Kocharyan’s presidency, the oligarchy was integrated into the regime. Seventh, during the 2018 events, segments of the Armenian Army and clergy did not hesitate to step in to support the opposition movement. This, too, can be explained by the fact that during Kocharyan’s repressive reign, there was more fear in society of punishment at the hands of the authorities, while the relatively benign presidency of Sargsyan focused on extracting resources from the country rather than on suppressing dissent as had been the case prior to 2008.

IMPLICATIONS: However, at the very onset of the protests Moscow encouraged Sargsyan to act with more determination against the protests. Some pro-regime oligarchs deployed Ukrainian-style titushki (mercenary agents) against the peaceful protesters. However, the scale of the protests and evidently wide support for the demand that Sargsyan should to step down tipped the scale. Moscow therefore reverted to pushing Sargsyan to step down. Indeed, given the scale of the popular protests and the opposition to Sargsyan’s rule, intervening on behalf of Sargsyan or pushing him to quell the protests by force could have triggered massive violence. This would have damaged Moscow’s interests by antagonizing a large part of Armenia’s population against both the violent regime and its patron.

Russia’s diplomatic and intelligence sources based in Yerevan repeatedly reported back to Moscow that Sargsyan would not be able to hold on to power without using violence, which he was not ready to do. Thus, Moscow had to minimize the damage by approaching Pashinyan in order to extract assurances from the emerging leader of his commitment to Russo-Armenian relations. Several delegates from Moscow, including Duma officials, approached Pashinyan who rather quickly confirmed that he would preserve the existing framework of relations between Moscow and Yerevan, assuring that his goals were purely domestic. Moscow then gave a green light for Sargsyan’s resignation and welcomed Pashinyan, carefully framing the protests in Armenia as the “sovereign right” of the Armenian people – an unprecedented move given Moscow’s record of counteracting “color revolutions” in the post-Soviet space. Moscow had to verify that Pashinyan understands the existing limitations to Armenian sovereignty both formally (membership in the Eurasian Union and Collective Security Treaty Organization) and informally (economic and political dependence on Moscow). The vast majority of Russian analysts in the foreign policy and diplomatic community agreed that a reshuffle would be of little or no danger to Moscow’s interests, and that moderate support for Pashinyan would be the least risky option in the long-term. Pashinyan sent timely and clear signals to both domestic and international audiences on his attitude towards Russia, pacifying the skeptics in Moscow.

According to Kremlin insiders, Pashinyan is a politician that makes Russian elites and strategists uneasy, since bottom-up grassroots politics and politicians capable of rallying thousands in a protest movement, is what Russian elites fear the most. Given his appearance as a blend of Saakashvili, Navalny and Ghandi, Pashinyan is not Moscow’s preferred type of leader in Yerevan; and he was certainly not Moscow’s first choice. Yet opposing his rise would have implied greater risks for Moscow’s interests in the region, thus Moscow’s framed its official position in a way that both welcomes Pashinyan as a partner and reinforces Russia’s image among the Armenian population.  The downside of this approach is the example that Pashinyan’s triumph sets for Russia’s political opposition, projecting the image that a grassroots movement with a leader campaigning against corruption could lead to a bloodless and quick change of political leadership – a message that Moscow would clearly like to suppress.

CONCLUSIONS: No major changes should be expected regarding Armenia’s dependence on Moscow. The existing framework of relations where Russia is the main guarantor of the status-quo and Armenia’s security, and a major economic partner, is hardly up for debate in the short to mid-term. Russia has no interest in pushing Armenia away or providing its political leadership with excuses for seeking closer relations with the U.S. or EU, despite the fact that part of Pashinyan’s Yelq party is rhetorically aiming for a more pro-Western Armenia, a direction supported by a considerable part of Armenia’s liberal youth. Given the external limitations, Pashinyan will have to double-down on any major expectations of such changes to occur in the foreseeable future. It should be noted that Armenia’s newly imposed parliamentary system will allow Moscow to easily block any pro-western initiatives, relying on its strong and cross-party power base. As some Russian analysts have suggested, Moscow will have to manage any possible Western attempts to use Pashinyan’s rise as an opportunity to strengthen their presence in the region, a rather unlikely perspective given how little is currently at stake for the U.S. and EU member states in the South Caucasus. It remains unclear whether Pashinyan will be able to deliver on his promises to negotiate better terms for Armenia’s alliance with Russia, especially with regard to Russia’s energy monopoly in Armenia, in economics, and concerning Russo-Azerbaijani military trade. However, whether successful or not, any changes to the existing framework will be minor.

AUTHOR’S BIO: Emil A. Souleimanov is Associate Professor of Political Science at the Department of Security Studies, Faculty of Social Science, Charles University in Prague, Czech Republic. Anton Barbashin is a political analyst and Editorial Director at Riddle, an online journal on Russian foreign and domestic politics.

More in this category: « The Tashkent Conference on Afghanistan: Too Much Diplomacy, Too Little Solution Taliban Resumption of Fighting Should Not Bury Afghanistan's Peace Process »
back to top