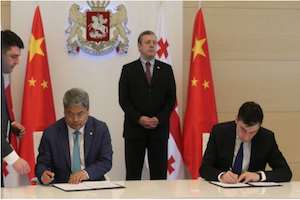 BACKGROUND: China has developed close trade contacts with all the South Caucasus countries and has invested extensively in the region. However, Georgian-Chinese cooperation stands out due to the size of investments and growth in bilateral trade.

After the collapse of the Soviet Union, China’s state-owned investment activities in the region drove Chinese immigration to Georgia. In the early 2000s, the majority of Chinese migrants ran corner shop businesses and restaurants or worked as market vendors. After 2010, a dominant portion have been construction workers.

China is now Georgia’s third-largest trade partner after Turkey and Azerbaijan, whereas Russia is in fourth place. Trade between the two countries has increased significantly over the past 10 years, from about US$ 10 million in 2002 to US$ 823 million in 2014-2015. In 2017, China and Georgia signed a free trade agreement during the visit of a Georgian delegation to China in May. The Georgian government hopes that the country’s position at the Black Sea, with several ports such as Batumi, Poti and Anaklia, will allow it to function as a logistics hub for the entire region and particularly for China’s BRI.

Aside from its Black Sea ports, Georgia can boast the East-West Highway, the country’s main land transport road, which essentially connects Azerbaijan and the Black Sea coast, and existing railway projects such as Baku-Tbilisi-Kars (BTK). Indeed, from Beijing’s perspective the three most valuable projects underway in the South Caucasus relate to Georgia. These include the opening of the BTK railroad, which will make the delivery of containers, freight and passengers from Asia to Europe 45 percent faster. Second, the construction of a new deep-water seaport has commenced in Anaklia, on the Black Sea, capable of handling 100 million tons of cargo per year and of receiving large Panamax-type vessels. Third, Georgia is expanding the East-West Highway, in cooperation with the World Bank, the Asian Development Bank, and other organizations.

IMPLICATIONS: China has been considering the South Caucasus route since the announcement of the BRI in 2013. For example, in 2015 China tested the connection efficacy between the Xinjiang province to Georgia’s Poti port, via Kazakhstan and Azerbaijan. Railway cargo loaded in China on January 29 arrived in Georgia on February 6. However, handling administrative obstacles took almost a third of the time in transit. China carried out several other tests  to explore the viability of the trade and transit route through the South Caucasus.

However, despite its advantages as a transit country, Georgia still faces numerous questions. Although Beijing considers Georgia’s location to be important, and the region to be strategically relevant, the Georgian corridor is not among the major transit and trade routes where China is investing heavily.

It is often overlooked in recently published analyses that the Georgian (by extension the South Caucasus) route has a marginal role in the corridors close to the Caucasus region envisioned under the BRI initiative, including from China to Europe through the New Eurasian Land Bridge; the China-Mongolia-Russia Corridor; and routes to Central and West Asian countries.

Also, while Beijing certainly demonstrates an interest in existing and upcoming infrastructure and construction projects in Tbilisi, Kutaisi and other major cities in Georgia, major Chinese-financed infrastructure and energy works completed in Russia, Kazakhstan, and Uzbekistan in the past several years far exceed the level of China-Georgia cooperation.

There is also a geopolitical aspect to the increasing Georgian-Chinese cooperation. Deepening economic relations have a geopolitical corollary – by increasing its economic footprint, China also obtains a greater stake in Georgia’s stability and security. Naturally, aside from potential economic gains, Tbilisi also perceives relations with China as a means for mitigating Russian pressure on the country. In Tbilisi’s thinking, if more regional players become involved in Georgia, security stakes in the country will increase for all the actors. Georgia’s path of EU integration, as well as its partnerships with the U.S., Turkey and Azerbaijan, represent the attempts of consecutive Georgian governments to balance Russia’s geopolitical influence in the South Caucasus. The hope that Georgia now attaches to China’s involvement follows the same pattern.

As China has built a new city at the outskirts of Tbilisi, have invested in Georgia’s second-largest city Kutaisi, and own three quarters of the shares of Poti’s free industrial zone, a clear east-west line to the Black Sea is materializing across the country, spotted with Chinese presence all along. It is certainly difficult to predict China’s future moves, but it is reasonable to expect that new actions by Russian forces in South Ossetia to move the demarcation line of the breakaway region to the south, closer to the East-West Highway, will be of concern for China as it endangers its economic interconnection with the South Caucasus. Beijing will then have to either find a common understanding with Russia or become more involved in Georgia’s security.

There is already a precedent for China’s military involvement in territories important to the BRI. China has taken certain steps in Central Asia that could potentially challenge Russia's economic and political influence in the region. China is already the largest trade partner of each of the Central Asian states, whereas Beijing has deepened its military and security ties with Tajikistan and partly with Kyrgyzstan mainly through military exercises and building military infrastructure on the Tajik-Afghan border.

For Tbilisi, an increased Chinese involvement in the South Caucasus will be a boon to its security. At present, however, hopes for such a development are seemingly unrealistic. Even in Central Asia, despite clear Chinese gains, Moscow still does not recognize a challenge to its influence by Beijing.

Another reason why Georgia is unlikely to become a point of contestation between China and Russia is the fact that Beijing’s is primarily concerned with fighting militancy and cross-border terrorism threatening the BRI. Therefore, while Beijing could very well invest in Georgian security beyond law enforcement and counterterrorism cooperation, security cooperation is unlikely to reach a level corresponding to that between China and the Central Asian states.

CONCLUSIONS: The prospects for increased Chinese engagement with Georgia are mixed. Beijing is indeed increasing its economic influence in Georgia. However, the investments are not on a par with Chinese actions in Central Asia or elsewhere, and Beijing is primarily interested in existing and upcoming infrastructure projects in Georgia. Moreover, there are currently no clear indications that China’s activities in Georgia and the South Caucasus compete with Russian interests and influence. Yet, given the region’s importance to Russia, Russian policymakers could come to perceive increasing Chinese engagement as a concern.

More in this category: « Armenia Elects New President Taliban and ISKP Attacks Foreshadows Violent Year in Afghanistan »
back to top