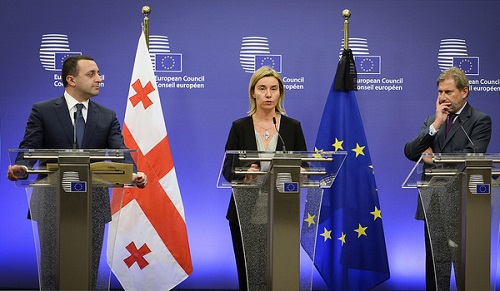 BACKGROUND: The GD government managed to secure Georgia's signature of an Association Agreement (AA) with the EU in June 2014, entering into force on July 1, 2016. The AA and its introduction of a Deep and Comprehensive Free Trade Area (DCFTA) agreement with the EU should be assessed as the most significant accomplishments of the GD government.

An example of the GD government's optimistic economic vision is the approval in 2014 of the "Social-Economic Development Strategy of Georgia – Georgia 2020." According to the strategy, the Georgian government's economic policy should be based on three key principles. The first implies ensuring rapid and efficient economic growth driven by the development of the real sector of the economy. The second implies the implementation of economic policies that facilitate inclusive economic growth. The third principle is based on the rational use of natural resources, the provision of environmental safety and sustainability, and natural disaster risk mitigation throughout the process of economic development.

The Georgian government has also instructed ministries and other state agencies to draw up mid-term action plans based on Georgia 2020 by June 30 of every year. Unfortunately, the government has yet to fulfill this task, which has raised questions about the feasibility of the objectives and goals set forth in the strategy.
An important reason for this is the primitivism present in the GD government's economic thinking. The "Governmental 4-Point Plan," initiated by Prime Minister Giorgi Kvirikashvili, was first introduced to businesspersons in early 2016. At the time, however, the plan itself did not exist in written form. The document outlining the 4-Point Plan first appeared towards the end of GD's pre-election program – "Freedom, Rapid Development, Well-being," developed for the 2016 parliamentary elections. Subsequently, the plan was incorporated into the winning party's government program of the same name.

IMPLICATIONS: The four points of the 4-Point Plan are: 1) economic reform, 2) education reform, 3) spatial planning and 4) governance reform. However, the plan promotes the maintenance and reinforcement of a non-productive and, at the same time, consumerist economic model in Georgia. Unfortunately, due to the low level of development of the real sector of the economy, the country consumes more than it produces. As a result, over the years, import is 3-4 times higher than export while import goods constitute an average of 80 percent of the consumer basket (as well as the food basket).

The cornerstone of point 1 is the exemption of businesses from corporate income tax on reinvested profits. Under these circumstances, the plan will bolster those Georgian firms that are typical of a non-productive and simultaneously consumerist economy. The system is known as the Estonian Model and entered into force in Georgia in 2017. It is unclear why tax breaks for profit reinvestment should be granted to restaurants and hotels, not to mention the financial sector. Such businesses are abundant in the Georgian economy even without tax benefits. It would have been more advisable to afford tax breaks only to those firms within the real sector of the economy that apply innovative technology to reinvest their profit. Given the severe shortage of such firms, the Estonian Model for corporate income tax will contribute to enhancing the consumerist structure of Georgia’s economy, offering no incentives to the nearly non-existent innovative real sector.

According to point 2, the vocational education system should be oriented towards a dual or work-based learning approach which entails training programs implemented jointly by educational institutions and potential employers. University education would be focused on the actual requirements of the economy, identified through labor market analysis. Yet once again, considering that Georgia has virtually no real sector or innovation economy, focusing the vocational education system solely on work-based learning approaches and university education solely on the actual requirements of the economy will not ensure the training of specialists befitting a knowledge-based economy. Thus, the focus of vocational and university education on current rather than prospective needs of the economy will further contribute to enhancing the consumerist structure of Georgia’s economy.

Point 3 postulates that spatial planning measures around the country should be conducive to sustainable urban and rural development and the advancement of an inter-regional transport network, ultimately aiming to transform Georgia into a year-round tourist destination. It is noteworthy that tourism was a priority under both the United National Movement (UNM) and the GD governments. Given that 80 percent of Georgia’s consumer and food baskets consist of import goods, the needs of tourists, as additional consumers, must be supplemented by additional import since Georgia produces only 20 percent of its food products and, unfortunately, none of the means of transportation or fuel necessary for travel within the country. Hence, the government tending solely to the development of tourism fails to contribute to the country’s diverse economic development and sustains trends applicable to a consumerist economy.

Evidently, the first three points of the 4-Point Plan contradict the country’s innovative development strategy and therefore also Georgia 2020. Indeed, theta unfortunately constitutes a vivid example of economic primitivism resulting from a disregard for economics. Since revenue otherwise generated from corporate income tax will now be deducted from the national budget, the government has called for increasing excise taxes and taxes on gambling. While increased taxes on gambling is seen as a positive development by both economists and society as a whole, the excise tax (on fuel and on tobacco products) is projected to at least double, which raises serious doubts. First, this could at least partially drive the tobacco business into the shadow economy. Second, fuel price hikes will have a negative impact on the economy as a whole as well as on the social conditions of the population.

These measures raises questions as to why the reduction in tax revenues ensuing from the application of the Estonian Model are compensated for only by raising excise taxes and why the government has not introduced other forms of taxation. During the UNM’s tenure, Georgia’s constitution was amended to state that the levying of any new taxes and all tax increases, aside from excise tax, can take place only via referendum. Regulating tax policy via referenda is clearly unjustified and devoid of any reason in this context: it can be said with confidence that the absolute majority of voters would oppose any tax increases or the imposition of any new taxes. Unfortunately, the GD government and parliamentary majority, which have resolved to revise the constitution, do not yet aim to conduct a referendum on tax policy or abolish these regulations.

Provided that the excise tax hike is an unpopular move, the government assumed an obligation to reduce budget expenditures in the national budget for 2017. Wage funds in the majority of budgetary organizations will decrease by 10 percent and administrative costs will be reduced by the same share. The government also associates this step with point 4 of the plan, which aims to enhance governance efficiency. Regrettably, the government does not have a clear understanding of what “enhancing governance efficiency” entails. In this context, the 10 percent reduction of state administration constitutes a simplistic approach as downsizing the government does not guarantee an increase in efficiency.

It is unfortunate that the government also fails to take into account that fuel price hikes or curtailing budgetary organizations under conditions of stimulated inflation will further complicate the social situation in the country and should not be in the government’s political interests.

CONCLUSIONS: In the early stages of its tenure, the GD government took a number of steps associated with economic optimism. The signature of the AA with the EU is of historical significance, aligning Georgia's economy with the EU's DCFTA. In this context, the adoption of the "Georgia 2020" strategy was essential, consolidating the government's aspiration to establish an innovation- and knowledge-based economy. Unfortunately, instead of tasking the ministries with developing action plans on the basis of "Georgia 2020" strategy (as envisioned by the government decree), the Prime Minister has entirely overlooked this complex document and replaced it with a primitive 4-Point Plan whose implementation cannot and will not lead to the improvement of Georgia's distorted consumerist economic model.

The source of Georgian economic primitivism lies in unprofessionalism and the denial of universally recognized economic principles. Under these circumstances, international financial institutions and civil society have a particular role to play since their engagement is virtually the only mechanism capable of exerting relatively effective pressure in order to eliminate economic primitivism and the replacement of incompetent personnel in the government.

AUTHOR’S BIO: Vladimer Papava is Professor of Economics, Ivane Javakhishvili Tbilisi State University, a Senior Fellow at the Rondeli Foundation, a Senior Associate Fellow of the Central Asia-Caucasus Institute & Silk Road Studies Program Joint Center, and author of Necroeconomics, a study of post-Communist economic problems. He was a Minister of Economy of the Republic of Georgia (1994-2000), and a Member of the Parliament (2004-2008).

More in this category: « Afghanistan Clashes with Iran over Dam Construction Russia’s Iskander Adventures in the Caucasus »
back to top