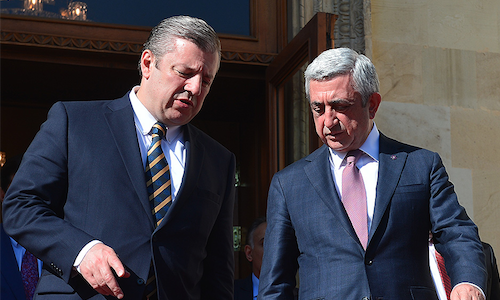 In Yerevan, Kvirikashvili met with his counterpart, Hovik Abrahamyan, and Armenia’s President Serzh Sargsyan. The prime ministers discussed issues pertaining to Armenian-Georgian cooperation in trade, energy, transport, tourism and education. Armenia’s Prime Minister stated appreciation for Georgia’s role in bilateral relations and in the context of regional security. Abrahamyan suggested the establishment of joint companies in Armenia in order to facilitate the activity of Georgian companies in the market of the Eurasian Economic Union (EAEU). Kvirikashvili welcomed the proposal, actually suggesting Georgian access to the EAEU via Armenia, and offered to discuss it later within the working group. The prime ministers discussed progress in constructing the Bridge of Friendship on the interstate border, which aims to facilitate border crossing and creating more favorable conditions for bilateral trade.

The parties welcomed the progress made under the newly initiated regional electricity project, which was launched in December 2015 by the signing of a memorandum of understanding between Russia, Georgia, Armenia and Iran. In this context, they also discussed the construction of a new electricity transmission line, which will boost bilateral cooperation in the energy field. Energy cooperation was also discussed separately, during Energy Minister Kaladze’s meeting with Armenia’s Minister of Energy and Natural Resources Levon Yolyan.

Kvirikashvili also discussed the bilateral agenda with President Sargsyan. Both emphasized that Armenia and Georgia have enjoyed brotherly relations stretching back for centuries. Sargsyan stated that “the current high level of the political dialogue between the two countries allows to further deepen the bilateral relations in all areas, taking them to a qualitatively new level.” In turn, Kvirikashvili emphasized that the two states have an excellent base for “full utilization of the existing great potential.”

The Georgian visit was preceded by rumors of an alleged meeting between Sargsyan and representatives of Abkhazian delegation in Nagorno-Karabakh in early September. However, Armenia’s Ambassador to Georgia, Yuri Vardanyan, declared that such statements do not correspond to reality, whereas Georgia’s Deputy Minister of Foreign Affairs Gigi Gigiadze said that it was “a political speculation common to representatives of the occupation regime [of Abkhazia].” Similarly, Kvirikashvili stated that “Armenia has always been and still remains a strong supporter of Georgia’s territorial integrity, its position in this view remains unaltered and the rest is solely political speculations.” Armenia’s support for Georgia’s territorial integrity was reaffirmed during a meeting between Edward Nalbandian and Mikheil Janelidze, Armenia’s and Georgia’s Foreign Ministers, on September 3 in Bratislava within the framework of the informal meeting of EU-Eastern Partnership Foreign Ministers.

The visit of Georgia’s Prime Minister to Armenia and the discussion on a wide range of issues on the bilateral agenda showed that Georgia and Armenia successfully deepen their relations in areas of common interest. As Georgia’s former Foreign Minister Irakli Menagharishvili noticed when commenting on the results of the visit, despite the many difficulties that the two nations faced after the collapse of the Soviet Union, Georgia and Armenia have successfully pursued exemplary bilateral relations.

More in this category: « Kyrgyzstan set to hold another constitutional referendum Georgia gears up for parliamentary elections »
back to top