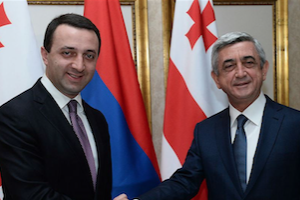 Georgia’s Energy Minister Kakha Kaladze met Alexey Miller, the CEO of Russia’s state monopoly Gazprom, in Milan on October 26 to discuss extending the existing agreement on transit gas to Armenia and “other technical issues.” Kaladze told media that “We also discussed the terms and conditions for the supply of additional volumes of gas.” This is the second meeting between Kaladze and Miller in a month.

Kaladze’s statements in early October about the need to import additional gas from Gazprom have sparked controversy, with opposition voices criticizing the government of endangering Georgia’s relations with its main gas provider, Azerbaijan. Kaladze insists that Georgia needs an additional source of gas at least until 2019, when Azerbaijan’s Shah Deniz II project is due to come online, to cope with the increased demand for electricity.

Within a week, both Armenia’s and Azerbaijan’s leaders visited Tbilisi to discuss a potential change of the energy status quo. While Azerbaijan was busy with the November 1 parliamentarian elections, Armenia’s President Serzh Sargsyan discussed “existing political-economic relations” with his Georgian counterpart. Kaladze reportedly did not attend any high-level meeting with Sargsyan, but the widespread perception is that the main purpose of Sargsyan’s visit is to talk about gas. Armenia depends entirely on supplies from Gazprom.

On November 5, Azerbaijan’s President Ilham Aliyev signed a joint declaration in Tbilisi with his Georgian counterpart Giorgi Margvelashvili, calling for strengthening the existing strategic partnership. “Our relations are based on the spirit of good neighborly relations, which has withstood serious tests. I recall 2008 [the armed conflict between Georgia and Russia], Russia’s occupation and a very principled position of Azerbaijan. Naturally, our relations will withstand any kind of test in the future as well,” Margvelashvili said.

The two presidents agreed to undertake a “high-level dialogue” on energy issues, with the participation of business circles where necessary, and to continue “joint” efforts to promote gas transportation through the Southern Gas corridor. In addition, Azerbaijan will through its oil company SOCAR “continue the efforts to secure reliable gas supply to social and commercial customers in Georgia.” In his speech, Aliyev reassured Tbilisi that his country has enough gas resources to cover Georgia’s gas needs: “Azerbaijan possesses very rich and large gas reserves. The confirmed reserves of gas are 2.6 trillion cubic meters. It means that for at least 100 years, Azerbaijan will be able to provide natural gas in large volumes for itself, neighbouring countries, and also for European states.”

Georgia’s former Prime Minister and billionaire businessman Bidzina Ivanishvili told media on October 27 that he was also involved in negotiations aiming to diversify the country’s gas supply to include Russia and potentially Iran. “I do not see anything bad in the fact that the Georgian market may possibly be diversified and businesses may be given the possibility to buy gas from wherever they want … The entire Europe is being supplied with Russian gas today and there is no crime if Georgia buys Russian gas,” he said.

Russia provides approximately 12 percent of Georgia’s gas supplies at the moment, as a transit fee for gas transported through the North-South pipeline to neighboring Armenia. The question of gas imports is crucial for Georgia, which lacks own gas resources and depends completely on imports from abroad. Tbilisi’s ability to free itself from Russian gas has long been viewed as a major victory for the country and its quest to carve out a future outside of Moscow’s orbit. The potential deal with Gazprom is considered a threat to national security and as increasing Russia’s leverage in Georgia’s politics.

Georgia switched to Azerbaijani gas in 2006, after Gazprom increased prices from US$ 63 to US$ 110 per 1,000 cubic meters and a series of mysterious blasts halted gas supplies from Russia at the height of one of the country’s coldest winters in memory.

Since 2006, then-president Mikheil Saakashvili made considerable efforts to end Georgia’s dependence on Russian natural gas. When Minister Kaladze brought up the issue of restoring imports of Russian gas in 2013, Saakashvili swiftly responded that the idea of “considering Russia as a serious alternative for energy supplies means fundamentally reviewing Georgia’s independence.”

So far, Baku has proven to be a reliable partner, supplying gas at preferential prices that are much lower than those charged by Russia. The representative of SOCAR in Georgia, Mahir Mammadov, said that the company is prepared for competition in the Georgian gas market. “This is a free market and if Georgia decides to increase Russian gas supplies, we will adapt to the new conditions and develop further. But on the whole, we are ready to compete,” Mammadov told the Trend agency.

Azerbaijani observers consider the idea of diversifying gas imports as bargaining on Tbilisi’s part to reduce the existing gas price.

Marsim Tsurkov, an observer of pro-governmental Trend news agency, alerted Tbilisi to the risk of falling into dependence on Russia. He noted that “in the end, Georgia is free to take its own decision. Whatever the solution, Azerbaijan will not lose, we can sell potentially free gas resources to Europe at commercial prices,” adding that “Georgia should bear in mind that Azerbaijan may not replace Russian gas once again in the future.”

Independent economist Azer Mekhtiyev warns that such an agreement is political rather than economic. In September, Azerbaijan itself signed a contract with Gazprom on gas imports during the next five years with the possibility of an extension. The agreement guarantees a supply of up to 2 bcm of gas per year. “These supplies will have significant influence and result in rapprochement between Azerbaijan and Russia politically, as well,” Mekhtiyev said.

More in this category: « Prison break in Kyrgyzstan ISIS warns Georgia »
back to top