On December 18-19, 2015 the Presidents of Armenia and Azerbaijan, Serzh Sargsyan and Ilham Aliyev, held a meeting in Bern, Switzerland. The Bern meeting came after an interlude of more than a year. The latest bilateral meeting at the presidential level took place in Paris on October 27, 2014 on the initiative of France’s President François Hollande, following previous meetings on September 4 in New Port, Wales on U.S. Secretary of State John Kerry’s initiative, and in Sochi on August 10, hosted by Russia’s President Vladimir Putin. 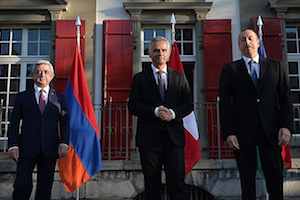 The talks began with a meeting between Armenia’s and Azerbaijan’s Ministers of Foreign Affairs Edward Nalbandian and Elmar Mammadyarov, as well as the co-chairs of the OSCE Minsk Group – Igor Popov of Russia, James Warlick  of the United States, and Pierre Andrieu of France, as well as the Personal Representative of the OSCE Chairman-in-Office, Andrzej Kasprzyk. Sargsyan and Aliyev then held a tête-a-tête meeting, in which the parties discussed steps aiming to reduce tension in the Nagorno-Karabakh conflict zone and possibilities to move forward with the resolution of this issue. In Bern, Sargsyan also had a meeting with Didier Burkhalter, the Head of the Federal Department of Foreign Affairs (FDFA) of Switzerland.

During the weeks preceding the Bern meeting, tensions between Armenia and Azerbaijan had escalated to levels not seen since the cease-fire in 1994. In particular, on December 8, 2015, the armed forces of Azerbaijan carried out tank shelling, which marks a new feature of Azerbaijan’s tactics. Concerns over the use of tanks were also voiced by Nikolay Bordyuzha, the Secretary General of the Collective Security Treaty Organization (CSTO).

In a joint statement adopted on December 3, 2015 in Belgrade, Russia’s Foreign Minister Sergey Lavrov, U.S. Secretary of State John Kerry and France’s State Secretary for European Affairs Harlem Desir, concluded that “the status quo has become unsustainable” and condemned the use of mortars and other heavy weaponry. This concerns were apparently addressed to Azerbaijan. In this context, the Deputy Director of the Yerevan-based Caucasus Institute Sergey Minasyan argued that Azerbaijan shows a clear tendency of escalating the situation around Nagorno-Karabakh before important meetings. He claimed that Azerbaijan undertakes such actions to demonstrate its dissatisfaction with the current status quo in the conflict and to change existing realities.

As to the outcome of the talks in Bern, Nalbandian, speaking for the Armenian side, declared that the sides presented their approaches to different principles of the settlement of the Karabakh issue, but that Azerbaijan’s standpoint matches neither that of Armenia, nor the proposals of the Minsk Group co-chairs. Nalbandian also claimed that “Azerbaijan cannot get rid of the delusion that it can translate the use of power, the escalation of the situation, into a negotiation tool.” On behalf of the Azerbaijani side, however, Mammadyarov declared that the holding of the meeting itself should be considered a positive development.

On December 19, 2015, the OSCE Minsk Group co-chairs released a press statement, highlighting that “the summit created an opportunity for the presidents to clarify their respective positions during their one-on-one meeting.” Commenting on the summit, Warlick stated that the parties did not move closer to reaching an agreement. However, based on the fact that the Armenian and Azerbaijani presidents still consider it important to talk to each other, Warlick hopes that the co-chairs will manage to arrange a new meeting during 2016. In turn, Burkhalter noted that “the Nagorno-Karabakh conflict could only be resolved by a comprehensive negotiation process” and called on the parties “to reinforce dialogue and to refrain from any act of violence or provocation.” The South Caucasus, according to Burkhalter, is a priority region of Switzerland’s peace policy commitment.

More in this category: « Georgia to achieve visa free regime with European Union Russia-Uzbekistan migration agreement unlikely to change conditions for migrants »
back to top