MAIDAN: Lessons for the South Caucasus

The turmoil in Ukraine is followed closely not only in Russia, but also across the Caucasus. While part of the population and opposition activists have found a source of inspiration in the capacity of ordinary Ukrainians to topple the corrupt and unpopular regime, possibly paving the way for Ukraine's accession into Western structures, regional elites have demonstrated a more ambiguous approach, ranging from careful endorsement to acute concern. 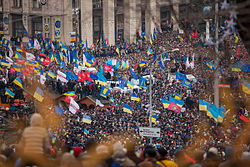 Internet users in Tajikistan were unable to access the website of Radio Ozodi (Freedom) for about a month in February this year. Access was blocked by Tajik internet providers following the request of Tajik State Communication Services, as was announced by the administration of the radio. Radio Ozodi is the Tajik bureau of the nongovernmental nonprofit news agency Radio Free Europe/Radio Freedom, broadcasting from Czech Republic. It covers local news in the countries of the former Soviet Union with a particular focus on the development of democratic, economic, human rights, and social institutions. The on-air broadcasting of Radio Ozodi is banned in Tajikistan for political reasons. The radio offers an alternative to official information on events, analysis, and opinions. It also conducts anonymous polls on political, economic, and social issues in Tajikistan and abroad.

The recent blockage of Radio Ozodi website in Tajikistan is not a single occurrence. The internet access to opposition or government-critical websites is usually limited during various political events in the country. Among the most recent, it was reported that Radio Ozodi and a few other websites were blocked before Tajikistan’s parliamentary elections in the winter of 2010, during Tajikistan’s military operation in the Autonomous region of Badakhshan in the summer of 2012, after the President’s son Rustam Emomali’s wedding in the spring of 2013, before the presidential election in the fall of 2013, and during political protests in Ukraine in the winter of 2014. Radio Ozodi was live-streaming the protests in Kiev when the website became unavailable to Tajik internet users. Radio Ozodi states that, in their effort to create an illusion of technical difficulties rather than governmental control, Tajik officials frequently practice partial cutoff of internet access to the website, while it remains accessible in some regions of the country.

The last blockage of the Radio Ozodi website prompted a note of concern from the U.S. Embassy in Tajikistan, posted on the embassy’s website on February 24. In its note, the Embassy highlighted the repeated practice of Tajikistan’s government to limit internet access and block mass media websites, and expressed its support for freedom of expression and exchange of information. According to Radio Ozodi, the official response from the Tajik government stated that the government is unaware of any limitation or blockage of the website. However, shortly after the statement of the U.S. embassy, full access to the website was restored.

Due to the heavy control of TV, radio, and print media by the Tajik government, internet remains the main platform for uncensored expression of public concerns, complaints, and opinions as well as the only source of alternative and reliable information for Tajiks. However, as of 2012, only a little over a million out of 7.9 million Tajiks had access to the internet, according to Internet World Stat. Low income and underdevelopment are some of the main causes of internet unavailability. Regardless of a relatively small number of users, the Tajik government regularly bocks certain websites. Alongside Radio Ozodi, the list of frequently blocked websites also includes Facebook, Youtube, Russian social network “VKontakte,” and various foreign and local news websites.

The systematic blockage of internet websites resulted in an open letter to Tajik head of communications, Beg Zukhurov by Reporters without Borders in 2012. Also, the internet blockage and suppression of press were addressed by OCSE free media representative Dunja Mijatovic in a letter to Tajik Foreign Minister Khamrokhon Zarifi in July of 2012. However, the continuous practice of limiting access to news and social network websites demonstrates the Tajik government’s indifference to such appeals. The website blackouts are frequently carried out under the pretense of technical difficulties, scheduled maintenance, or unawareness of such problems.

Based on the frequency and selectiveness of website cutoffs, it can be concluded that the Tajik government is highly interested in establishing internet censorship in the republic. Lessons from the Arab Spring demonstrate the efficiency of masses collaboration and coordination against regimes via the internet and social networks. Radio Ozodi and other similar websites provide Tajik internet users with information and services which would otherwise be unavailable. While Tajikistan, under pressure from Western partners and human rights organizations, abolished the criminal penalty for defamation in 2012 which was perceived as a threat to journalists, the freedom of expression and free media is still suppressed and intimidated by the government. Tajik officials monitor information and sources thought to be malicious to the regime and employ administrative tools of control when necessary. The government realizes that although not comprehensively developed in Tajikistan, internet usage is a potential tool for fanning political upheaval and as a result, the reoccurring blockage of Radio Ozodi in Tajikistan is likely to persist.

As the international community started to pay greater attention to the North Caucasus because of the Sochi Olympics, ethnic minorities’ complaints in the region significantly increased. In particular, the Circassians became highly vocal about their grievances. Given the authoritarian and increasingly nationalist regime in the Kremlin, the Russian government perceives the rise of activism among Circassians as a security threat. The Olympics served for Moscow as a certain type of litmus test that pointed to the areas of Russia’s vulnerability in the North Caucasus. Now, the aggrieved minorities and the central government appear to be entering a path of confrontation in already volatile region. 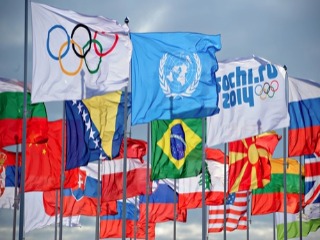 As reported by an official press release on February 12, 2014, Tajikistan's parliament ratified the recently signed "Protocol of amendments to the Tajikistan-Russia governmental agreement on labor activities of their citizens in the host countries." This protocol came in addition to an earlier agreement signed on October 16, 2004. The ratified amendments extend the validity of work permits issued by Russia to Tajik labor migrants from one to three years. Tajik labor migrants can now stay in Russia longer, without needing to leave and reenter the country every year as was provisioned by the initial agreement.