While the political aspects of reforms in Kazakhstan have gained considerable attention, economic reforms are an equally strong focus of President Kassym-Jomart Tokayev’s policy agenda. Building on the initiatives developed by his predecessor, President Tokayev has implemented plans that serve to diversify Kazakhstan’s economy. Key measures include the development of agriculture, as well as the strengthening of manufacturing, in order to make Kazakhstan a bread-basket of Central Asia as well as a producer of household goods. 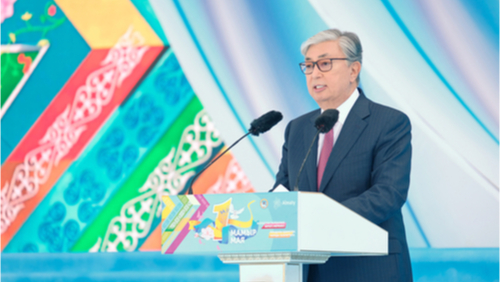 BACKGROUND: Economic reform has long been the cornerstone of Kazakhstan’s reform agenda. Under First President Nursultan Nazarbayev, the government followed an explicit policy that prioritized economic reforms, leaving political matters to a later day. For two decades, the country’s economic agenda was led by oil and gas exploration, which provided Kazakhstan with the funds needed to modernize its economy at a time when the country had few other marketable resources. But the volatility of oil prices, and the global shift away from fossil fuels, led to a growing realization that diversification was necessary.

In 2012, Nazarbayev launched the Kazakhstan-2050 Strategy, which committed to making the economy “immune to global commodity price fluctuation.” Key economic points of the strategy included the development of infrastructure, of industry, and of agriculture; the increase of foreign investment; the management of natural resources and state-owned assets; and the support of small to medium-sized enterprises, among other points. The end goal of this vision was a Kazakhstani economy that is stable, diversified, and competitive throughout the 21st century – an economy that would ideally land among the top 30 most developed economies in the world by 2050.

President Tokayev’s reform efforts continue and accelerate the reform strategies set out by Nazarbayev. In his first address as President, Tokayev emphasized the need to increase returns from state-owned assets; provide support to small business entrepreneurs; increase FDI in a variety of sectors; develop the country’s agricultural industry; and abandon the “raw material-based mentality” in favor of a diversified, knowledge-based economy. But there are areas where he brings new initiatives to the table. Tokayev introduced two new strategic priorities: modernizing the tax system to ensure equitable distribution of national income, and reducing the role that state-owned enterprises (SOE) play in the Kazakhstan economy. Tokayev also provided more granular detail than his predecessor regarding the implementation of previously announced initiatives. For example, Tokayev set clear steps towards developing Kazakhstan’s agricultural industry: increase the amount of irrigated land; grow agricultural production 4.5 times by 2030; ban the sale of agricultural land to foreign entities; and seize land that goes unused.

Tokayev’s state of the nation addresses in 2020 and 2021 do more to discuss progress on these initiatives and to announce plans for next steps towards their implementation than they do to discuss the pandemic or to announce new strategic priorities. Surprisingly, the COVID-19 pandemic did not do much to force Tokayev’s focus away from his long-term reforms, despite the billions of dollars spent on income assistance and other anti-crisis packages. Part of this might be owed to the fact that the pandemic coincided with the initiation of a compulsory health insurance program announced in 2018 and implemented in January 2020. In his 2020 address, Tokayev identified “seven basic principles” that should govern a new diversified, technological economy;  announced the need for a law “On Industrial Policy” to define the role of the manufacturing industry; and initiated a “National Project for the Development of the Agro-Industrial Complex,” among several other initiatives.

Likewise, in Tokayev’s 2021 address, the two issues in the realm of economic policy that received the most attention were development of the agro-industrial complex and digitalization of the economy. In each of these areas, he identified specific challenges that affect reform progress, and announced specific efforts to alleviate them.

The National Development Plan, announced in March 2021, identified specific priorities leading up to 2025. Three key priorities included “building a diversified and innovative economy; active development of economic and trade diplomacy; and balanced territorial development.” Towards this end, the plan highlights the central role that the Astana International Finance Center will play in privatizing business and attracting foreign investment. There was also emphasis on several other areas to support diversification, including changes to regulatory mechanisms and the adoption of seven ‘ecosystems’ within the agricultural sector. Finally, goals were set for the development of economic and trade diplomacy to increase investments and for the growth of non-commodity exports.

IMPLICATIONS: President Tokayev’s strategy for economic diversification primarily involves building up the country’s agricultural and manufacturing sectors. For the former, a “National Project on the Agro-Industrial Complex” seeks to establish seven large ecosystems for production, including meat, fruits, vegetables, sugar, cereals, oilseeds, and dairy products. The end goal is to attract investment in the sector, double productivity, provide for domestic food demand, and increase food exports. In a 2017 speech, Nazarbayev envisioned Kazakhstan as a “bread basket” of Central Asia with an established brand of “Made in Kazakhstan.”

In his 2019 address to the nation, President Tokayev outlined specific goals for agriculture: increase the amount of irrigated land to 3 million hectares by 2030; grow agricultural production 4.5 times in that same time frame; ensure a ban on foreign ownership of Kazakh land; seize land that is inefficiently used; and provide better quality of life for rural populations. Tokayev has also begun to address the issue of agricultural subsidies, and to tackle the fraudulent exploitation of these subsidies, an issue previously identified by the OECD.

Similarly, reform efforts towards manufacturing are based on the concept of building an “economy of simple things” – focusing on low tech, household goods. These products can be easily manufactured using the raw materials that are otherwise exported out of the country. Just as with food production, Tokayev aims to fill domestic demand for these goods, thereby decreasing dependence on foreign imports and increasing the share of manufactured goods in Kazakhstan’s exports.

The bigger, and more long-term efforts towards diversification involve implementing a separate strategy known as “Digital Kazakhstan,” which seeks to develop a knowledge-based economy where the systems driving private sector and public sector functions are entirely digitized. Kazakhstan has already invested significantly in an e-government platform that has improved administrative efficiency, decreased administrative costs, and reduced opportunities for corruption in human-to-human interactions. Additionally, the country is looking to invest heavily in technologies like 5G, fiber optics, big data, AI, and smart city technology. All the while, officials hope to promote a culture supporting tech start ups and entrepreneurship. Toward this end, the Astana International Financial Centre, located in the country’s capital, serves as an innovation and investment hub aiming to attract foreign and domestic private investments in the tech industry. The Centre also serves as a separate judicial system that will adjudicate regulatory and civil disputes among business leaders in order to increase investors’ confidence in Kazakhstan’s business environment.

Underpinning this diversification are broader efforts to support growth of the economy and of entrepreneurship. First, Tokayev invested billions of dollars into the Auyl - El Besigi project – a nationwide project seeking to modernize rural infrastructure. This will be a critical component to supporting growth in the production and exportation of agricultural and manufactured goods.

Additionally, Kazakhstan has long sought to establish a favorable regulatory environment. The country ranks 25th in the World Bank’s Doing Business 2020 report, which ranks the world’s economies based on their regulatory environments and the ease with which entrepreneurs can conduct business therewithin.

CONCLUSIONS: A key challenge for Kazakhstan is to diversify its economy while overcoming the geographic constraints of being a landlocked country. The difficulty of diversifying an oil-dependent economy have long been well-known, and this challenge in itself is a considerable one to overcome. As was seen in Kazakhstan’s negotiations to join the WTO, the country’s leaders are also acutely aware of the “distance tax” that landlockedness imposes on the country, by adding a markup on its export goods that make them more difficult to market.

Kazakhstan’s strategies for economic reform should be seen against this background: the development of agriculture, an economy of “simple things”, and a big bet on digitalization are all economic strategies congruent with Kazakhstan’s geographic constraints. Their success will be dependent, in part, on whether Kazakhstan’s political reforms gain traction. Most important, the efforts to combat corruption will be key to make Kazakhstan an attractive target of foreign investment, and to reduce the burden on Kazakh entrepreneurs trying to compete in foreign markets.

More in this category: « Uzbekistan Without The CSTO NATO In Afghanistan - New Commander, Same Challenges »
back to top