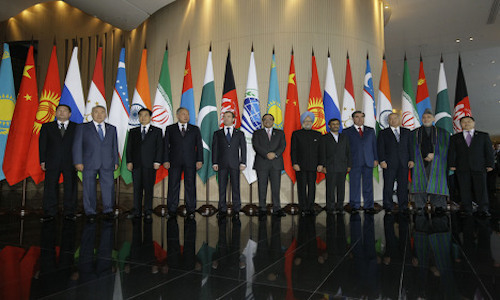 BACKGROUND: With the signing on April 26, 1996 in Shanghai of the Treaty on Deepening Military Trust in Border Regions, Kazakhstan, China, Kyrgyzstan, Russia and Tajikistan formed the Shanghai Five. Both Moscow and Beijing viewed the then newly independent Central Asian republics not only as a cause of concern but also as an opportunity.

Within a year of its formation, the bloc signed the Treaty on Reduction of Military Forces in Border Regions, yet the world paid little attention until 2001 when Uzbekistan joined the grouping, whereby it was renamed the Shanghai Cooperation Organization. The June 2005 summit in Astana, Kazakhstan, caught international attention as Mongolia, Pakistan, Iran and India were granted observer status.

Ever since, the member states have interacted trough focused groups on transportation, energy, telecommunications, military and commerce. Though the organization’s prime focus is combating threats from non-state actors, including terrorism, separatism and drug trafficking, China’s increasing business interest is transforming the SCO’s outlook.

Initially, the member states largely shared views on regional and global politics. With the new entrants, the SCO will become less a marriage of convenience amongst ideologically harmonious neighbors and more a hotchpotch of bitter competitors and rivals. Besides geographical disputes, India disagrees with China and Pakistan on policy towards Afghanistan and vice versa. Now that the UN sanctions are lifted, Iran will soon be upgraded from its observer status to the ninth full member.

Though Belarus and Turkey are dialogue partners, Ankara has repeatedly expressed the desire to become a full member of the bloc, which may require it to quit membership in NATO.

IMPLICATIONS: The SCO has earned the reputation of a forum intended to demonstrate steady progress as a message to the West. Yet even given strong political will, it will take the SCO years to assume a role similar to that of NATO. Although separatist tendencies are on the decline and programs related to border security have borne fruit, the bloc needs to invest more in curbing drug trafficking and extremism originating mainly in Afghanistan. Additionally, Central Asian states and marginalized regions of Russia have been rich sources of recruits for the terrorist organization known as the Islamic State in Iraq and Syria (ISIS). The Kremlin’s heavy-handed support for the Syrian regime as well as brutal rulers in federal regions like Chechnya also serve as a provocation for Islamic extremists across Eurasia. Once ISIS is deprived of its territory, Russia might become more vulnerable to terrorist attacks than it has ever been. China, whose Uygur-populated Xinjiang region has withstood harsh religious and social subjugation, may face an increased risk in this regard, too.

After Iraq and Syria, Afghanistan offers enabling conditions for ISIS in its attempt to create a state, and its conflict with the Taliban serves this existential aim. Much is already at stake in Afghanistan for China, Tajikistan, Pakistan and Iran due to their shared borders. Russia’s support for the Taliban aims to increase the U.S. cost for bringing stability. Thus, the emerging situation of competing interests in the war-torn Central Asian country is a litmus test for the SCO itself. Ironically, the resumption of the stalled Pakistan-Afghanistan quadrilateral talks, including China and the U.S. while excluding Russia, is a step in the right direction. The breakthrough occurred in Astana where Afghan President Ghani attended the 2017 SCO summit. The four-nation talks had previously broken down after the Taliban supreme leader was killed on his way from Iran to Pakistan in February 2016. Meanwhile, China has cobbled together tripartite negotiations with Pakistan and Afghanistan.

A decade after its creation, the SCO’s military posture remains obscure since the status of its affiliates ranges from members to observers and dialogue partners. On the contrary, NATO has a uniform status for all members. At the same time, New Delhi’s strategic partnership with the U.S. as a regional ally in South Asia has continually marred the ambition of creating an alternative political and security bloc.

Along the way, the SCO has weakened its unified approach on core issues with the extension of full membership to Pakistan, India and Iran. For instance, India and Pakistan as well as Iran and Pakistan disagree on the definition of terrorism in a broader context. For India, Kashmir’s militants are terrorists, the Houthis of Yemen are heroes for Iran, while Pakistan disagrees with both. Yet, the members are obliged to participate in the Tashkent-based Regional Anti-Terrorism Structure, which has evolved as a forum for exchanging information and working out a common strategy for combating terrorism. Moreover, the memorandum of obligations also requires joint military exercises, which will create a unique military-to-military interface if India and Pakistan participate alongside China. So far, the two rival armed forces have rarely served side by side under UN peacekeeping missions.

Pragmatically, the consequences of two nuclear-armed rivals sitting under one roof debating global and regional security may lead the organization to nowhere. Some Chinese analysts believe that India’s push for entry aims to prevent the emergence of a military and economic bloc with Beijing in the center seat.

Russia’s interest in exploiting the energy hub along with reclaiming geographic depth in Eurasia, and China’s drive to access new markets and creating a free-trade area may well define the future shape of the organization.

Besides a strong military alliance, Iran expects the birth of a new banking and economic system independent of the existing international monetary setup. The BRICS bank is already operating, and the SCO is working to establish an interbank consortium on the “Basis of Partnership” with the Silk Road Fund. The consortium is composed of the financial institutions of China, the Kyrgyz Republic, Russia, Tajikistan and Uzbekistan under the Agreement on Interbank Cooperation (Consortium) within the SCO framework of October 26, 2005.
Pakistan and India will also be required to join the consortium as members to forward the bloc’s bid to support regional economic cooperation and provide financial support and services to its investment projects. India, which opted out of the Belt and Road Forum due to objections on the China-Pakistan Economic Corridor, may only have ceremonial participation.

In June 2009, China pledged to extend a hefty US$ 10 billion loan to SCO member states as the world economy suffered the ramifications of the financial crisis. Such a bilateral soft loan hardly comes without easier market access and an improved image in the recipient nation. In the future, the SCO may offer a larger similar loan to Afghanistan for reconstruction, which could have deeper and longer-term implications for the U.S. and its allies including India.

For Moscow, an alignment and functional relationship between SCO and BRICS (comprising Brazil, Russia, India and China) remains a hope for the future despite the fact that the bloc’s economy is anything but promising, with the exception of China. The marriage of these two economic blocs would quell the Russian quest for a bi- or multi-polar global political order. For Beijing, a similar arrangement between SCO and OBOR is an ambition in sight.

CONCLUSIONS: As China maintains its policy of anchoring the status quo, Russia has increasingly strived to undermine it. While Beijing has vetoed Western resolutions against the Assad regime in Syria, it has not sent troops in his support like the Kremlin. Over the years, China has pursued the goal of establishing itself as a global power by developing its own military wherewithal with minimal dependence on Moscow. Given little policy overlap and varied ambitions, the SCO does not pose a significant challenge to NATO. The group can succeed with its political and economic mandate at a pace less ambitious than expected, while President Putin may remain content if strategic states like Armenia, Azerbaijan, Syria, Egypt, Nepal and Sri Lanka gain observer status in due course. The SCO’s geographical spread is more likely to move it towards the non-alignment movement than anything more muscular and imposing.

AUTHOR’S BIO: Naveed Ahmad is a strategic analyst and academic with extensive research experience in South-Central Asia and the MENA region. Based in Doha and Istanbul, he specializes in matters concerning security, diplomacy and governance. He has been a contributing author for the CACI Analyst since 2004. Tweets @naveed360.

More in this category: « The Implications of NATO’S Noble Partner-2017 Exercises for the South Caucasus The Belt and Road Initiative and China's Xinjiang Dilemma: “Connectivity” Versus Control? »
back to top