On September 10 and 11, Kazakhstan’s capital hosted the annual meeting of the Eurasian Forum of Emerging Markets. This non-profit organization was founded in 2005 and aims to facilitate a direct dialogue between governments and the private sector in order to establish socioeconomic conditions favorable to growth and shared prosperity. While the plenary session of the Forum was attended by such prominent world leaders as the former Prime Ministers of Italy and Israel, Romano Prodi and Ehud Olmert, as well as the former President of Poland, Alexander Kwasniewski, it was Kazakhstan’s President Nursultan Nazarbayev who chaired the high-level meeting.

The latest Steppe Eagle annual multilateral military exercise in Kazakhstan occurred from August 10-23, at the Illisky Training Center near Almaty. The exercise, held under NATO auspices, confirms that the Kazakhstani national security community wants to retain defense ties with Western countries despite their country’s deep military relations with Russia. This goal should grow in coming years as NATO winds down its combat operations in Afghanistan. In this context, sustaining Kazakhstan’s Airmobile Forces Brigade (KAZBRIG) is important for promoting interoperability between NATO and the rest of Kazakhstan’s military. 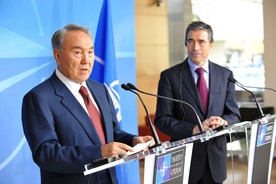