Tajikistan assesses its potential for joining the Eurasian Economic Union (EEU), which came into effect on January 1, 2015. Pressure on Tajikistan to reach a decision on membership increased with the inclusion of Kyrgyzstan as one of the EEU’s forthcoming members. Tajik president Emomali Rakhmon proposed an in-depth study of the benefits of EEU membership for Tajikistan during the Eurasian Economic Community meeting in Minsk on October 10, 2014. As a result, the Central Asian expert club Eurasian Development in Dushanbe prepared an analysis of priorities which would stipulate Tajikistan’s successful integration into the EEU.

The experts’ list of issues which Tajikistan must address in its consideration of EEU membership includes Tajikistan’s low production output; its lack of infrastructure and unreliable railroad communication with other EEU members; energy security and continuing disagreement with Uzbekistan; the security and interests of Tajik labor migrants; compensation for short-term losses in Tajikistan’s custom duties; the border dispute with Kyrgyzstan; the preservation of transit cooperation with China; and taking stock of Tajikistan’s tourism industry potential. The report overall emphasizes Tajikistan’s immediate economic concerns.

Eurasian Development executive director Guzel Maitdinova in her expanded commentary on the report and Tajikistan’s potential membership pointed out the EEU’s fundamentally economic basis. Maitdinova confronted the critics of Tajikistan’s EEU membership who suggest it will inevitably imply a loss of sovereignty for the republic. Maitdinova insisted that the EEU should not be compared with the European Union which, unlike the EEU, functions through a common parliament and pursues a single model of political development for all members. Another point is the equal ability of all members to block any decision or resolution of the EEU. Also, the EEU foresees equal representation for all members regardless of the country size or membership dues which are in turn divided proportionately. Currently, Russia pays 88 percent of the total membership dues, Kazakhstan 7.3 percent, and Belarus 4.7 percent. Favoring the EEU, Maitdinova stressed the importance of Tajik labor migrants for the country’s economy, which would lose the extensive EEU labor market to Kyrgyz migrants if Tajikistan refuses to join. Maitdinova believes that EEU membership will enhance Tajikistan’s transit cooperation with China as it opens unlimited opportunities of the Eurasian market for China.

The newly founded EEU is a successor to the Eurasian Economic Community (EEC) established in October 2000 by Belarus, Kazakhstan, Kyrgyzstan, Russia, and Tajikistan. The main task of the EEC was the formation of a Customs Union and creating conditions for a common free market zone among its members. October 10, 2014 marked the last day of the EEC. The agreement between Belarus, Kazakhstan, and Russia on the EEC was signed on May 29, 2014. The primary objective of the EEU, alongside free trade, includes a common labor and service market and unrestricted capital movement. Also, in addition to the existing common customs regulations, the EEU will develop a common monetary, taxation, and trade policy.

Armenia, which possessed observer status at EEC, and Kyrgyzstan rapidly decided to join the EEU (Armenia became a member on October 10 and Kyrgyzstan signed its association agreement on December 23, 2014). Tajikistan has reviewed and analyzed Armenia’s and Kyrgyzstan’s integration process. Armenia had to formally waive its territorial claims on the Nagorno-Karabakh region but received sizable custom duties privileges and Kyrgyzstan was able to secure US$ 1 billion assistance from Russia through the creation of a Russian-Kyrgyz Development Fund. The Eurasian Development report discusses the possibility of similar financial incentives for Tajikistan and expects increased engagement from other members in the resolution of its territorial disputes with Kyrgyzstan. Also, experts anticipate an EEU interest in developing Tajikistan’s hydroelectric power resources.

While other members of the EEU, Russia in particular, are supportive of Tajikistan’s admission, there is a lack of commitment to financial assistance. Russia’s ambassador to Tajikistan, Igor Lyakin-Frolov, only expressed hopes for Tajikistan benefiting from special custom duties status in a manner similar to Belarus and Kazakhstan or a development fund similar to that of Kyrgyzstan, otherwise remaining highly reserved on the outlook of financial assistance to Tajikistan. Olga Gavruk, Belarus’ ambassador to Tajikistan, primarily sees Tajiks as a labor force for other EEU members. Such a vision implies a further dependency of the Tajik economy on migrants’ remittances and the continuing stagnation of Tajikistan’s industrial complex.

Tajikistan has made the first steps towards integration with the EEU. However, the consequences of EEU membership for the republic are far from clear. Tajik experts have outlined major areas for comprehensive economic research, which must involve various governmental agencies, think tanks, and the business community. The process of EEU integration will include adjustment of specific domestic and foreign policies, legislative changes, considerable investments, and short-term losses. Eventually, Tajikistan’s dependency on Russia and Kazakhstan not only through labor migrants, but also through a significant amount of trade (according to the Tajik Statistics Agency, Russia and Kazakhstan respectively were first and second among Tajikistan’s trade partners in 2013) might persuade the country to opt for membership.

Armenia to be Admitted into Eurasian Union 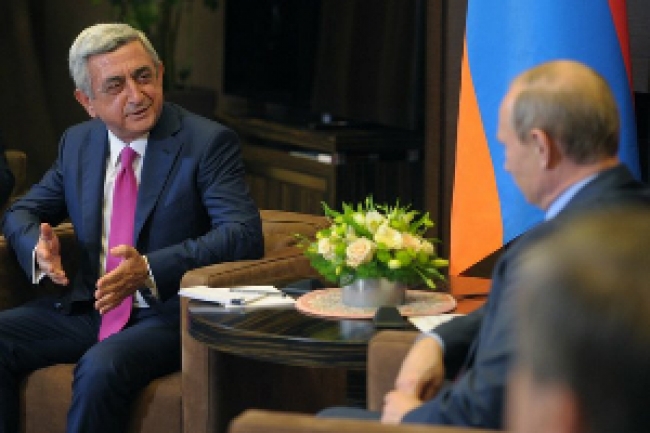 Russia’s President Vladimir Putin had his way as Belarus and Kazakhstan ratified the treaty on establishing the Eurasian Union, as well as agreed to admit Armenia. An agreement on the main controversy concerning Armenia’s admission into the Eurasian Union – the likely establishment of customs controls on the border with Nagorno-Karabakh – has supposedly been reached. Meanwhile, Armenia’s parliamentary opposition announced the beginning of a long-term protest movement but refused to criticize Russia’s expansionist policies. 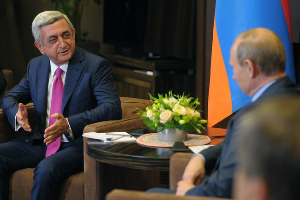 In a recent interview to the state TV channel Khabar, Kazakhstan’s President Nursultan Nazarbayev spoke about his country’s possible withdrawal from the Eurasian Economic Union. In his words, “Kazakhstan’s independence is our most precious treasure, for which our forefathers fought. We will never surrender our independence and will do everything to protect it. Astana will never join an organization of any form, which presents any threat to its independent statehood.”

Analysts consider the demarche of the Kazakh President a response to recent Russian statements, which have to some extent questioned Kazakhstan’s viability and independence as a state. Speaking at the Seliger youth forum, Russia’s President Vladimir Putin described his Kazakh counterpart as the most experienced politician in the post-Soviet space and gave him credit for creating a state in a territory, where there was none before. In his words, “before Nursultan Nazarbayev, Kazakhstan has never had any statehood.” This statement from the Russian side generated a sharp and bitter reaction among the Kazakhstani public, especially in nationalist and patriot circles. Several virtual protest actions were organized in the country, particularly a flash mob on social media that demanded a history book to be sent to Putin for revision.

Moreover, an earlier statement by the Deputy Speaker of the Russian Duma, the leader of Russia’s Liberal Democratic Party Vladimir Zhirinovsky, created a highly negative backdrop for President Putin’s later remarks. In his usual undiplomatic manner, Zhirinovsky said that after settling the Ukrainian crisis, Moscow should pay attention to the developments in Kazakhstan, where in his opinion, “anti-Russian sentiments are also on the rise.” Obviously, Zhirinovsky's statement come as no surprise to many. His demand last year that in return for its debts, Kyrgyzstan should give its Issyk-Kul Lake to Moscow, earned him a persona non grata status in that country.

The exchange of statements between the two Presidents has given rise to varying comments and assessments. Many were quick to make declarations about the big rift between Putin and Nazarbayev and the unexpected crisis in the Eurasian Economic Union (EEU). However, according to Almaty-based political analyst Dosym Satpaev, these implications are exaggerated. This is not the first time that Nazarbayev has made such remarks. In one of his earlier meetings with the country’s intellectual circles, the Kazakh President described the EEU as an exclusively economic project and said that if doubts arise, Astana will leave the organization at any time it deems necessary. Earlier, President Nazarbayev has also vetoed the creation of a legislative body within the EEU, the function of which obviously goes beyond mere economic integration.

The Moscow-based Central Asia expert Arkadyi Dubnov believes that Putin’s Seliger remarks were interpreted by Kazakhstan’s leadership in light of the developments in Ukraine.  Kazakhstan, along with Ukraine, are parties to the 1994 Budapest memorandum. Both countries declined to maintain their nuclear arsenals in exchange for guarantees of territorial integrity. At that time, Moscow appeared as the major international guarantor and has in breach of the aforementioned memorandum annexed Crimea, claiming that no guarantees were given to the new political leadership in Kiev. According to Dubnov, Kazakhstan’s political leadership might have interpreted Putin’s and Zhirinovsky’s statements along the same lines, namely the possibility of a “Crimean scenario” in northern Kazakhstan with its significant Russian minority, if Astana obtains a new, nationalistic political leadership that disregards the Kremlin’s interests.

Indeed, there are many unknowns in this story and one can only speculate about the real logic behind the statements. It remains unclear what really prompted President Putin to make this claim. One can also simply interpret his statement as an effort to emphasize the role of his Kazakh counterpart, who has also been awarded the lifelong title “leader of the nation,” for founding modern Kazakhstan. Astana’s statement is also unlikely to have implications beyond the declaratory level, since Nazarbayev, as President Putin also stated at the youth forum, “is himself the chief initiator behind the creation of the Eurasian Economic Union in its current form.” 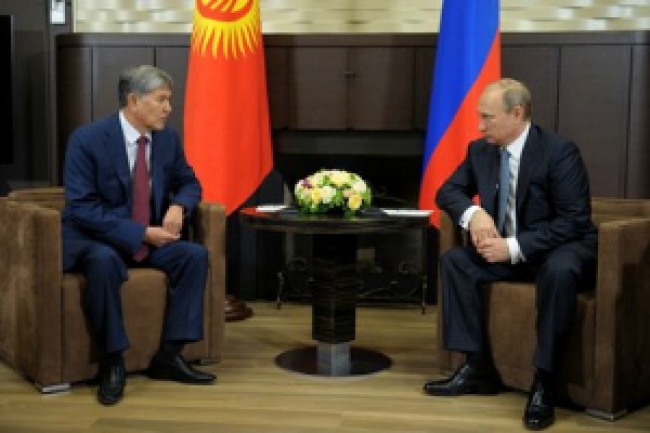 Bishkek has long considered whether to join the Russia-led Eurasian Union. Yet recent events relating to the resumed hostility with Uzbekistan, border disputes with Tajikistan, and Russia’s move against Ukraine could play a decisive role in Bishkek’s decision to accommodate Moscow’s geopolitical project. An additional factor is the worsening situation in the Middle East, where the rise of Islamic extremism and the clear inability of the U.S. and its allies to deal with the problem is clearly taken into consideration by Kyrgyzstan’s leadership and likely provides an incentive for reinforcing its alliance with Moscow. 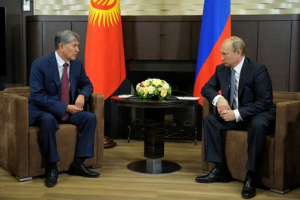