There are two major policy shifts occurring simultaneously in China which will open new markets for Central Asian agroindustrial development and exports. The first is monumental. China is not only relaxing subsidies on domestic agricultural production while promoting the market mechanisms required to import more grains, it is genuinely letting go of domestic production as a food security ballast, and will begin to let other nation states feed its populace. The second is industrial international capacity cooperation, the policy solution to China's overcapacity malaise. The program envisions moving whole production chains offshore, essentially shifting Chinese industrial capacity to external geographies. 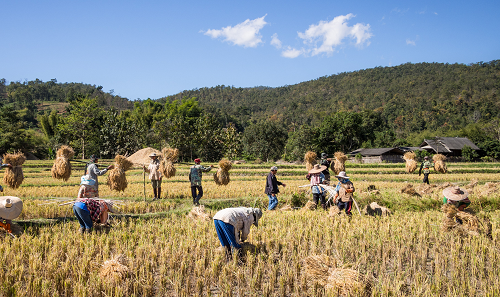 BACKGROUND: In 2014 China began movements towards a market price system for agricultural production. Since 2008 the state had guaranteed the purchase price of key grains, oilseeds and cotton, creating a differential between international and domestic prices, and allowing both corruption and inefficient overcapacity to creep into the agricultural sector. China is currently part-way through a three-year plan to marketize the price of domestic agricultural production. However, this reform is not simply changing the mechanism by which China produces grain. It is designed to connect China to world markets and, crucially, to allow imports to service its food security needs. China currently imports around 80 percent of its soy beans. With new markets opening to foreign export such as rapeseed, sugar, cotton, corn and even eventually rice and wheat, the price of grain in China should now be a core policy concern for China's neighbors in Central Asia. In China there is active talk of shifting cotton production to Kazakhstan, Uzbekistan, and Tajikistan; Kazakhstan is targeted for investment in agroindustrial capacity with eastward grain and oilseed shipments expected to increase as rail logistics improve.

Industrialization of agriculture has gained policy traction throughout the past five years of the Xi administration. Boosting production capacity in other countries is increasingly being accepted as a solution to feeding China as it relaxes its previously tight definition of food security. Politburo agricultural policy has been active in establishing partnerships in agricultural production with neighboring countries, particularly in Russia and Central Asia, with dedicated sovereign wealth seeded industrial investment funds specifically for both Russia and Kazakhstan in agroindustry.

China's Central Asian and Russian strategy is the state arm of a state-market solution: on the one hand opening domestic markets to foreign grain imports, while on the other establishing agroindustrial policy in post-Soviet markets. International capacity cooperation is China's industrial policy to internationalize and complement domestic economic reforms and industrial restructuring. China has been plagued by low capacity utilization rates in almost all sectors of the industrial and agricultural economy, due to overinvestment by state capital. International capacity cooperation aims to avoid restructuring China's state-market investment-driven industrial model by simply shifting industrial chains to external geographies. Plans exist for every continent on Earth, and for Central Asia and Russia the focus is clearly on energy equipment, machinery, and agroindustrial manufactures.

IMPLICATIONS: For the rest of the world, this is a seismic shift as China transitions from an export-oriented economy into a net importer. And for grains and protein there can be no larger market than China. For Central Asian states with existing industrial bases such as Kazakhstan and Uzbekistan, or for countries which can trade on the cleanliness of their water, soil and air, such as Kyrgyzstan, this is a significant shift, opening up new export markets and possibilities to develop new value chains.

Dry-port development to connect the international trade of land-powers is moving forwards quickly with the development in Khorgos and China state funding for the Kazakh-China rail project. And UNESCAP's Intergovernmental Agreement on Dryports provides the institutional framework to encourage development of port infrastructure in other economies dependent on land routes for international trade. China has also invested heavily in upgrading its dry-port facilities in border crossings with Russia and Mongolia at Manzhouli and Erenhot. And a bold new intercontinental rail plan is designed to facilitate international trade with block-train services from China set to expand to nearly fifty one-way and two-way services from Chinese terminals.

China's government has established specific agroindustrial investment funds, targeting sovereign wealth investment in Russia and Kazakhstan. With the Russian Far East agricultural industry development fund, China is moving away from renting or purchasing agricultural land abroad, a policy that has proven to be a public relations disaster from Kazakhstan to Australia. The development fund will finance grain production and processing in Russia, while introducing Chinese agricultural equipment as part of the capacity cooperation strategy. This is demonstrative of a strategy moving away from land ownership and towards fixed-capital ownership.
Given domestic constraints, capacity cooperation is a rising priority in China's agriculture policy. And the reality is that Chinese investment in Central Asia is not about land or agriculture, it is about cement, steel, and glass; energy equipment, agroindustrial machinery and equipment, construction machinery, railway and transport equipment, and services in transport, logistics and port services through which China hopes to establish whole industrial clusters in external geographies. China plans to export industrial chains to Central Asia, and to own the resulting industrial cluster infrastructure. This is not simply an export opportunity or a land-rights issue, it is a huge fixed capital project-based investment system. While Central Asian economies should be wary of Chinese state-capital, development of agroindustrial chains and opening of export markets are exactly the kind of capital investment that the economies of the region need.

However, despite Central Asia's need for capital investment, China's concept of the Eurasian land bridge has struggled to gain traction in host economies in the Eurasian Economic Community. Inefficiencies persist in connecting Asia and Europe through Central Asia with high transport costs, low volumes and differing industrial standards leaving many transport and shipment routes heavily dependent on state-subsidies. Poor coordination with both market and government actors also remains an obstacle. It is difficult enough for China to coordinate its centrally planned domestic hierarchical economic structure, leaving little room for lateral engagement with Central Asian states, local governments or private enterprises. While China's central government will play an increasingly stronger role in identifying its own industrial investment and agricultural import needs, developing genuine international relationships and private capital business networks will not be so simple.

CONCLUSIONS: Price support policies in China are rapidly marketizing previously protected agricultural production. The development of finance mechanisms to take some of China's agroindustrial investment into Central Asia and Russia is already a reality, with Kazakhstan as the lynchpin for China's wider Belt and Road geoeconomic strategy. International Capacity Cooperation is likewise bringing Chinese fixed capital and investment capital to Central Asian states. This means the doors to the largest consumer market in the world are opening for Central Asia's agricultural exporters. While Chinese capital is always linked to state-owned enterprises, the chance to develop agroindustrial production bases is a huge opportunity for Central Asian states. Coupled with assured export markets, agricultural commodity exports to China and investment in agroindustrial machinery, cement-steel-and-glass, and factory systems could develop new agroindustrial sectors for Central Asian economies, and provide the basis for greater economic integration under the China-funded Belt and Road initiative.

AUTHOR’S BIO: Tristan Kenderdine is a PhD candidate at Australian National University Crawford School of Public Policy and Research Director at Future Risk, Contact details: This email address is being protected from spambots. You need JavaScript enabled to view it. .