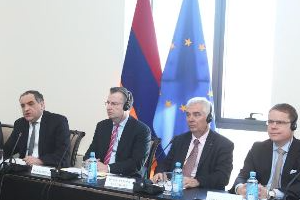 In 2013, Armenia refused to initial the Association Agreement with the EU. However, as stated in the declaration of the Vilnius EaP Summit on November 28-29, 2013, the EU and Armenia have reconfirmed their commitment “to further develop and strengthen their cooperation in all areas of mutual interest within the Eastern Partnership framework, stressing the importance of reviewing and updating the existing basis of their relations.” At the EaP Riga Summit on May 21-22, 2015, Armenia and the EU took a step further and underlined that they had reached a common understanding on the scope for a future agreement. Armenia’s Minister of Foreign Affairs Edward Nalbandian expressed his appreciation of the recent progress in EU-Armenia relations at the meeting of Eastern Partnership and Visegrad Four foreign ministers’ meeting in Prague on May 3-4, 2016.

On May 23, the 7th Annual Eastern Partnership Foreign Ministers’ meeting took place in Brussels. In his speech, Nalbandian welcomed the fact that due to the EU Council’s revised policy towards the EaP countries, “the principle of differentiation and tailor-made approach” will be applied. Regarding the new agreement to be signed between Armenia and the EU, Nalbandian noted that it “will reflect the depth and essence of our bilateral relations and set new guidelines for a mutually beneficial comprehensive deep partnership”.

In Brussels, Latvian Foreign Minister Edgars Rinkēvičs raised the necessity of deepening relations with the EaP countries. He mentioned that the EU needs to reinforce its cooperation with the EaP countries through implementation of Deep and Comprehensive Free Trade Agreements (DCFTAs), visa liberalization and closer sectoral cooperation. The Latvian Foreign Minister also called for negotiations on new agreements with Armenia and Azerbaijan.

Armenia took another step towards closer cooperation with the EU by joining “Horizon 2020,” the EU’s research and innovation funding program as an associate member. The agreement was signed on May 19 by Carlos Moedas, European Commissioner for Research, Science and Innovation, and Levon Mkrtchyan, Armenia’s Minister for Education and Science. As Johannes Hahn, the EU Commissioner for European Neighborhood Policy and Enlargement Negotiations noted, this was “a concrete example of the EU’s commitment to further enhance its relationship with Armenia.”

Another issue that was high on the EU-Armenia agenda was the Nagorno-Karabakh conflict. On April 27, Nalbandian received the ambassadors of EU member states accredited to Armenia and presented the situation caused by the unprecedented military escalation in Nagorno-Karabakh in early April. This meeting was followed by a visit of EU’s Special Representative for the South Caucasus and the crisis in Georgia, Herbert Salber, to Yerevan. On May 10, he met with Nalbandian and President Serzh Sargsyan. Along with Armenia-EU relations, the interlocutors also discussed the Nagorno-Karabakh conflict. Salber expressed his intention to visit Nagorno-Karabakh “as soon as it is agreed among all parties.”

On May 16, the Presidents of Armenia and Azerbaijan, Serzh Sargsyan and Ilham Aliyev, met in Vienna to take part in a discussion initiated by OSCE Minsk Group Co-Chairs, also attended by U.S. Secretary of State John Kerry, Russia’s Minister of Foreign Affairs Sergei Lavrov and France’s State Minister for European Affairs Harlem Désir. In Vienna, Sargsyan also met with the EU’s High Representative for Foreign Affairs and Security Policy Federica Mogherini. Mogherini expressed readiness to support measures aimed at confidence building in the conflict zone. This point was also emphasized by the head of the EU delegation in Armenia, Piotr Świtalski, the day prior to the meeting in Vienna.