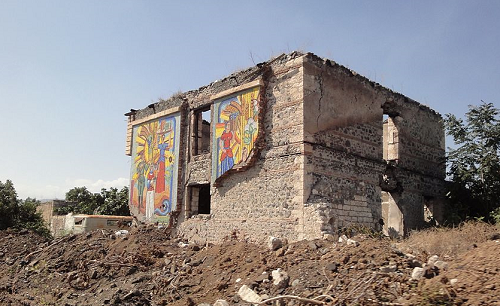 BACKGROUND: The latest deadly round of escalation on the LoC catching international attention occurred on February 25, 2017. While it is as usual highly difficult to obtain confirmed information regarding the casualties, Azerbaijan’s Ministry of Defense (MoD) announced that 6 Azerbaijani soldiers were killed in the course of a few days combat, while also claiming casualties among Armenian servicemen and the downing of an enemy drone in the Fuzuli region. The corpses of the five Azerbaijani servicemen killed in the initial fighting on February 25 could only be recovered from the battlefield two days later with the participation of the OSCE monitoring mission. The cease-fire has since seen frequent violations involving 122 mm guns, mortars, and heavy machine guns. Azerbaijan’s MoD claims to have destroyed two Armenian military compounds and vehicles carrying soldiers.

This is taking place against the background of a deadlock in peace negotiations. The day before the February clashes, Azerbaijan’s Foreign Minister Elmar Mammadyarov stated that “I don’t have an optimistic view of meetings over the Nagorno-Karabakh conflict, neither does my Armenian counterpart in his speeches give us a chance so that we can discuss something positive.” Mammadyarov’s statement came in response to Armenia’s Foreign Minister Eduard Nalbandyan’s interview with the Russian RIA Novosti agency, in which he described expectations for a breakthrough in the peace process as futile. On February 20, the non-recognized Nagorno-Karabakh Republic, which Azerbaijan considers to be an Armenian puppet regime established in the occupied territories, also held a constitutional referendum on changing its official name to Artsakh. International organizations and the Minsk Group member states did not recognize this unilateral development, which further reduced the likelihood of progress in the peace negotiations. Azerbaijan’s Ministry of Foreign Affairs denounced the region’s referendum as “nothing but an attempt to deceive itself and the international community as well undermine the negotiation process.”

IMPLICATIONS:  As tensions remain high and the deadlock continues in peace negotiations, the war rhetoric is prevailing in the official discourses of both countries. Yet, the change of focus from peace efforts to the prospect of military confrontation is not a new trend in the region. Since 2014, the intensity of skirmishes along the LoC, along with near silence on the diplomatic front, has signaled the possibility of sudden and more devastating violence. The military equipment used in the regularly occurring skirmishes has become more advanced, and local commanders on the LoC have been given increased authority to deploy this hardware. Nevertheless, the real shift came with an announcement in early February 2016 by Armenia’s Deputy Defense Minister David Tonoian that Yerevan was moving from a “static defense” strategy to a more active deterrence mode. Such a move was also in line with Armenia’s 2015 military strategy, which permits preemptive action in the name of deterrence.

As both sides have hardened their military posture, the Four-Day War was a logical consequence. Whereas Azerbaijan and Armenia exchange accusations about who initiated the escalation, from Baku’s point of view the April war ended in Azerbaijan’s favor as it prompted international efforts to bring the two countries to the negotiating table and considerably improved Baku’s hand. It demonstrated Azerbaijan’s willingness to move beyond rhetorical threats and use its military power in Nagorno-Karabakh, challenged the conception of the Armenian military being the superior force along the LoC, and showed that Armenia’s membership in the Russia-led CSTO does not guarantee the country’s security in the case of a resumed war.

Azerbaijan calculated that it was the right time to push forward the long-stalled peace process based on the so-called Lavrov plan (which includes elements of the updated Madrid principles and the 2011 Kazan document), signaling a readiness to reopen communication lines to Armenia and provide security guarantees to the Armenian community of Nagorno-Karabakh in exchange for the de-occupation of at least a few of the adjacent regions. As a gesture of goodwill for launching comprehensive peace talks, Azerbaijan tentatively agreed on the establishment of a mechanism for investigating cease-fire violations, a retreat from Baku’s long time rejection of any move that can serve to cement the status quo on the LoC.

However, to Baku’s frustration, after meetings between Azerbaijan’s and Armenia’s presidents in Vienna on May 16 and St. Petersburg on June 20, 2016, peace negotiations have entered an impasse. According to Matthew Bryza, the former American OSCE Co-Chair, Armenia’s President Serzh Sargsyan initially agreed to advance the peace process based on Moscow’s plan. Yet the government reversed its approach after subsequent events in Armenia, most importantly the Sasna Tsrer revolt during which war veterans attacked a police station in Yerevan resulting in a two-week hostage crisis and mobilizing public support for the veterans. Baku accused Yerevan of using these developments to manipulate the public in order to justify its rejection of negotiations.

The negotiations have failed to produce meaningful results and the situation has returned to the pre-April 2016 deadlock – a familiar and depressing mix of mutual accusations of bad faith, Azerbaijani frustration, Armenian inertia, and diplomatic wrestling over tiny details. As the peace process fails, violence surges periodically turning into a war of attrition. Along with stagnation in the peace process and engagement in low-intensity fighting, both countries have speeded up their efforts to improve the combat readiness of their armies for a possible new grave escalation.

Immediately after the April 2016 fighting, Armenia launched efforts to accelerate the delivery of new weaponry from Russia, based on a July 2015 US$ 200 million military loan agreement. Since then, Armenia has received a range of advanced weapons, including Iskander missiles. Armenia also strengthened its military alliance with Russia by establishing a joint military force. In a bid to balance Armenia’s new acquisitions and despite a serious drop in oil revenues, Baku amended its military budget for 2017, increasing defense spending to AZN 2.642 billion (US$ 1.5 billion) – a 63 percent rise from the initially proposed AZN 1,026 billion (US$ 586 million). In fall 2016, both countries conducted some of the largest military drills in their history, which also coincided with severe cease-fire violations.

CONCLUSIONS:  After the eruption of violence in April 2016, British analyst Thomas de Waal warned that it was hard to conceive how the Nagorno-Karabakh conflict could return to its semi-quiet state of the last few years. He noted that either a new political process would deliver results, or there would be more violence. Now, when the peace process has lost momentum and clearly failed to deliver results, calculated or unintended escalations are unavoidable. An increased level of violence is becoming a “new normal” for the Nagorno-Karabakh conflict, as both sides continue to test each other’s will to fight. However, there is no sign that either side is willing to soften its position as a result of an increased number casualties. On the contrary, both societies are becoming more nationalistic, revenge seeking and committed to their cause in the conflict.

Russia initially took the leadership in brokering peace but now seems to have relinquished its plans, whereas the West has turned a blind eye to the region after Donald Trump’s election as U.S. president. As the sporadic fighting around Nagorno-Karabakh continues, the international community will also likely get used to the new level of violence and casualties, as has been the case in Syria, Ukraine and elsewhere. Thus new escalations may not be met with the same reactions and diplomatic efforts that were among the few positive developments emerging after the Four-Day War.

AUTHOR’S BIO: Azad Garibov is the Editor-in-Chief of the Istanbul-based academic journal Caucasus International. He is the editor of the book “The Caspian Sea Chess-Board: Geo-political, Geo-economic and Geo-strategic Analysis” (Milan, 2014).