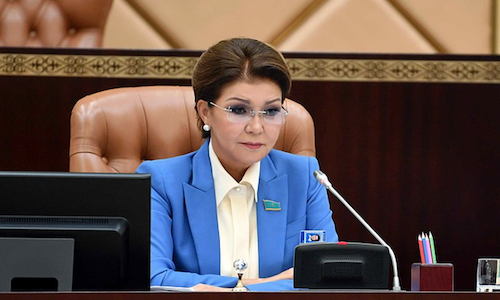 BACKGROUND: The decision, subsequently confirmed by the Central Election Commission, ignited a firestorm of speculation as to what was behind the move, particularly as the Senate speaker was first in line to succeed the president should he become incapacitated. Those seeking synergy in the events noted that Senate members unanimously elected Nazarbayeva as Senate speaker the day after her father announced that he was stepping down as president to be succeeded by Tokayev on March 19, 2019. Nursultan Abishevich Nazarbayev, formerly First Secretary of the Kazakh SSSR Communist Party’s Central Committee, became Kazakhstan’s first post-Soviet President, a position he would occupy for 28 years.

The multitudinous issues that Nazarbayev faced in 1991 after the collapse of the USSR were daunting: hyperinflation, remodeling a centrally planned economy towards free-market capitalism and forging a sense of nationhood from among more than 100 nationalities populating an area larger than Western Europe. Nazarbayev remarked of the problems he faced, “There was no such thing as Kazakhstan. It was just a chunk of Soviet Union. I had to build a country, to establish an army, our own police, our internal life, everything from roads to the constitution. I had to change the minds of the people 180 degrees, from totalitarian regime to freedom, from state property to private property. Nobody wanted to understand that. My comrades from the communist party were against me. I had to train myself too. I wasn’t raised with democracy and freedom of speech.”

Adding to his difficulties, many of the ethnic Slavs who had formally been prominent in the Moscow-dominated republic now left with the Russian Federation, creating a substantial “brain drain.” Not surprisingly, Nazarbayev turned to his inner circle, including family members, to implement his agenda to transform Kazakhstan from a Soviet republic to an independent, sovereign nation. Dariga, the eldest of Nazarbayev’s three daughters, has sought an active role in the country’s political life. In Alma-aty, Dariga and her husband Rakhat Mukhtarovich Aliev, set about helping her father.

Given Nazarbayev’s emphasis on loyalty to implement his vision of a post-Communist Kazakhstan, Dariga and Rakhat quickly became indispensable and trusted members of Nazarbayev’s inner circle, accumulating substantial wealth along the way from interests in banking, oil refining, the media, telecommunications, real estate and agricultural commodities. Rakhat would eventually hold high office in the country’s tax and security administrations before his father-in-law, tiring of his greed and illegal activities effectively rusticated him in early 2007 to be Kazakh ambassador to Austria. Evidence of his misdeeds continued to mount to the point where Dariga divorced him via fax in June 2007, retaining custody of their three children as he clashed with his father-in-law over his political ambitions.

In June 2014, Aliev flew to Austria from his residence in Malta, turning himself in to await possible extradition on charges of murdering two Kazakh Nurbank executives. Aliev’s notoriety in his homeland subsequently began to diminish, a process accelerated by his purported suicide in Vienna’s Josefstadt prison in February 2015.

Despite her divorce from Aliev 13 years earlier, questions about the legality of Dariga’s wealth accumulated during her marriage resurfaced in late 2019, when the UK National Crime Agency (NCA) used new legislation, an “Unexplained Wealth Order” in an attempt to confiscate three London properties belonging to Nazarbayeva and her son, reportedly worth £80 million. Questionable fiscal practices had allowed many in Nazarbayev’s inner circle to accumulate great wealth; in 2013 Forbes magazine estimated Nazarbayeva’s wealth at US$ 595 million.

IMPLICATIONS: While Dariga’s legal team successfully refuted the charges, the NCA announced that it would appeal, which continues to cast an unflattering light on the finances of Kazakhstan’s former First Family. Dariga’s second marriage brought in still more income as her husband since 2016, Kairat Kamataevich Sharibayev, is head of Kazakhstan’s state gas transportation company Kaztransgas. Further negative publicity occurred when Nazarbayeva was named in documents leaked as part of the Panama Papers investigation as the owner of an offshore company in the British Virgin Islands, which owned shares in Kazakh sugar factories. Such ostentatious wealth at a time of economic recession heightened by record low global energy prices and a burgeoning viral epidemic did not endear Nazarbayeva to the public, despite her father’s three decades of political accomplishments. Many assumed that Nazarbayeva’s appointment as Senate speaker was a temporary prelude to succeeding her father as president while Tokayev served in an interim placeholder capacity, similar to the game of political musical chairs played in Russia by Putin and Medvedev.

A paramount question remains concerning Nazarbayev’s knowledge or role in his daughter’s abrupt political demotion. While no longer president, Nazarbayev retains substantial political influence as permanent chairman of the National Security Council. Nazarbayev’s honorific lifetime role as “Elbasy” (“leader of the nation”) immunizes him from legal prosecution and allows him to veto government policies. Further evidence of his continually prominent role in the nation’s politics is the unanimous vote by the country’s largely supine and subservient Parliament in 2019 to rename the capital Astana Nur-Sultan in his honor. Few analysts believe that Dariga’s demotion could have occurred without her father’s tacit acceptance at the very least.

It is notable that Tokayev had earlier been Speaker of the Senate, thus Dariga’s election to this position to some extent symbolized political continuity during a period of transition. However, in the last 14 months Tokayev has consolidated his power, diminishing whatever presidential ambitions Dariga may have held.

Recent events indicate that Tokayev has succeeded in shifting the loyalty of significant elements of the Kazakh elite away from Nazarbayev’s immediate family, consolidating his power more quickly and thoroughly than many thought possible. Tokayev’s policy towards his predecessor leaves Nazarbayev’s full panoply of honorifics intact while diminishing his political clout to an increasingly ceremonial role. The speed and depth of Tokayev’s consolidation of power represents a political tsunami among the country’s elite, which has apparently concluded that the country’s future includes executive and legislative government branches purged of Nazarbayev’s immediate family.

Regarding Dariga’s future, Kazakh media reported on May 15 that, according to information from close associates of Security Council secretary Aset Issekeshev, Nazarbayeva has discussed with Elbasy new governmental work that would suit her. One possibility is Secretary of State, replacing Krymbek Kusherbayev who has discredited himself by his close contacts with the Russian special services.

Tokayev’s swift and increasing decisiveness has been most striking; he has lost no opportunity to consolidate and strengthen his independent executive power, most notably on May 16 by signing amendments to the law on presidential powers during a state of emergency. In contrast, following her unexpected dismissal, Dariga has maintained a low political profile, emerging only on June 2 in her role as chairman of the Kazakhstan Youth Congress council.

Tokayev has striven to maintain a façade of unity between his policies and those of his predecessor. When asked during a recent interview about the observation by some political scientists that a “kind of dual power” had arisen in Kazakhstan, Tokayev tartly replied, “The first president, Nursultan Nazarbayev, is a figure of historical proportions, the founder of modern Kazakhstan … There is no dual power, Nursultan Abishevich himself has repeatedly said this, urging everyone to unite around the current president.”

CONCLUSIONS: Whatever the ultimate outcome of Dariga’s sudden demotion, for the first time since independence there is no Nazarbayev in the top echelons of Kazakhstan’s executive or legislative branches. Given the accolades and legal immunity still accorded Elbasy, his daughter’s political demotion seems acceptable to the country’s rising political elite produced by Nazarbayev’s policies. Unlike neighboring Uzbekistan, where the former President Islam Karimov’s daughter is currently serving a 13-year prison sentence for financial crimes committed during her father’s tenure, no such fate at present seems likely for Dariga. For the moment, the only certainty is that should she continue discreetly to refrain from public political life, she will not be short of money to salve her disappointment.

As for Elbasy, in the sunset of his years he earlier remarked of his legacy, “Some people approached me saying they would like to raise a monument to me like they do in Turkmenistan for Turkmenbashi, I asked, what for? Astana is my memorial.”

Image Source: accessed via Wikimedia on 7/9/20