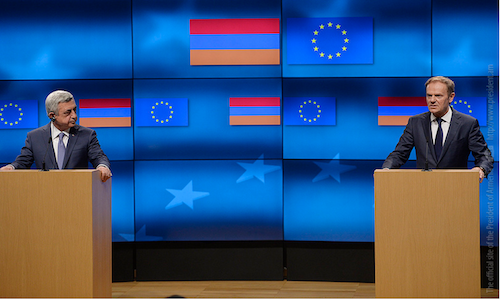 BACKGROUND: The EU and Armenia initialed a Comprehensive and Enhanced Partnership Agreement in March 2017. Armenia has also taken some steps aimed at continuing its cooperation with NATO, including the process of approving the Individual Partnership Action Plan for 2017-2019 and participation in NATO’s Noble Partner exercises in Georgia in July (see the 06/22/17 and 07/11/17 Issues of the CACI Analyst). These developments gave rise to a cautious optimism that the Armenian government would seek a gradual diversification of its foreign policy, although without questioning its strategic alliance with Russia.

Most analysts are rather optimistic regarding the chances that the EU-Armenia agreement will be signed in November as planned. President Serzh Sargsyan and Prime Minister Karen Karapetyan stated on different occasions in August that the government was determined to sign the agreement.

However, just a few weeks earlier, Minister of Justice David Harutyunyan, Deputy Chair of the National Assembly Eduard Sharmazanov and other top representatives of the ruling Republican Party of Armenia (RPA) engaged in a protracted dispute with the Head of the Delegation of the European Union to Armenia, Ambassador Piotr Switalski. The EU representative spoke at a conference on the experiences gained during the recent parliamentary elections and possible further developments, and questioned the credibility of Armenia’s Central Election Commission (CEC). Furthermore, Switalski recommended changes to the composition of the CEC, implying the need to restore public trust in the elections.

Armenian officials responded not only by rejecting the EU representative’s suggestions, which allegedly constituted an “interference in Armenia’s internal affairs,” but also with a personal attack on the ambassador. The harsh reaction was unexpected not only because of the extent of argument, but also because the EU had shortly before provided over US$ 7 million upon the government’s request for purchasing election observation equipment. In addition, the government representatives certainly welcomed the EU’s budgetary support, which amounted to over US$ 30 million in 2016.

Simultaneously, the intensity of anti-EU (and more generally anti-Western) propaganda has been growing since the initialing of the EU-Armenia agreement. Similar extensive propaganda campaigns could previously be observed in 2013, in the months preceding President Sargsyan’s decision to refuse the EU-Armenia Association Agreement and to instead join the Russia-led Eurasian Economic Union (EEU), as well as in 2015 after the EU Eastern Partnership summit in Riga, when it was agreed that the abandoned Association Agreement could be replaced by another framework agreement.

IMPLICATIONS: Despite the official assurances concerning the planned signing of the EU-Armenia agreement and the further development of relations, overt optimism is premature until the agreement is signed and ratified. It should be recalled that just two weeks before the decision to join the EEU in 2013, then Prime Minister Tigran Sargsyan and other top officials also made confident statements about the planned signing of the Association Agreement with the EU. As noted previously, the outcome of the current attempts to advance Armenia’s relations with the EU still depend on Moscow’s reaction (see the 06/09/17 Issue of the CACI Analyst).

According to the head of the Yerevan-based Regional Studies Center Richard Giragosian,

President Sargsyan’s recent statement about the upcoming signing of the EU-Armenia agreement contained “obvious inaccuracy and falsehood,” since Sargsyan claimed that in 2013 his administration had negotiated with both the EU and the EEU, and blamed the EU for the impossibility of signing both agreements.

The latest wave of anti-Western propaganda has mainly focused on themes common to similar defamatory campaigns in Armenia and other post-Soviet countries, including the West’s alleged immorality, which by extension would imply the loss of traditional family values, legalization of gay marriage and other “sinful” consequences. It also points to alleged economic and demographic decline in countries that have implemented Association and free trade agreements with the EU – Georgia, Moldova, and Ukraine, as well as the Baltic States and other EU members that used to be part of the Soviet bloc. Some more specific details of the current campaign include allegations, particularly by media outlets openly controlled by Russia, such as Sputnik-Armenia news agency, about the dangers of further developing cooperation with NATO as well as potential benefits for Armenia if the country agrees to participate in Russia’s military campaign in Syria.

Significantly, the same media outlets also attempted to launch a personal attack against the U.S. Ambassador in Armenia, Richard M. Mills, following statements he made on August 25. Mills praised Armenia’s recent participation in the Noble Partner exercise and noted that the U.S. would continue to avoid selling offensive weapons to any of the parties to the Karabakh conflict: “I think that is one area where we differ from Russia,” he said. Yet the most hostile reaction came in response to the ambassador’s mention of the need to ensure that Armenia is capable of making its own sovereign decisions: “we want to help give Armenia the tools to continue making sovereign choices and to make sure that it’s not overly influenced or forced by others to follow certain paths that perhaps Armenia doesn’t want to follow.”

A week later, Armenia cancelled its participation in the Agile Spirit exercises, which began in Georgia on September 3, at the last moment. The Defense Ministry issued a statement saying that it had not even planned to take part, but Georgia’s Defense Ministry reconfirmed that the Armenian side had attended the final planning conference in July, and confirmed its intention to join the exercise. Significantly, Eduard Sharmazanov, who is also the RPA spokesman, said that Armenia could not participate in exercises aimed “against our ally.” Russian media, which had previously expressed strong disapproval of Armenia’s participation in the Noble Partner exercise, praised the decision.

CONCLUSIONS: Armenia’s political leadership may be willing to continue the gradual development of relations with the EU and NATO unless it faces strong pressure from Russia, which could ultimately amount to removing Sargsyan’s administration. As Russia’s economy is likely to decline, with potentially grave consequences for Armenia’s economy due to its dependence on remittances, even a limited opening towards the West may provide additional opportunities to develop the economy and preserve internal stability.

However, the reluctance of Armenian officials to even acknowledge certain possibilities of economic diversification, such as the proposed investments in renewable energy (see the 06/09/17 Issue of the CACI Analyst), suggests that the development of cooperation with the West will continue to face internal obstacles in addition to external ones. Even with Russia’s influence put aside, the oligarchic system itself opposes to major reforms. As Laure Delcour and Kataryna Wolczuk aptly noted in an article in the Journal of European Integration in 2015, “the political regime (a non-competitive political system dominated by oligarchic groups) would probably not survive the reforms which Armenia would be required to introduce.” Furthermore, “EU requirements related to human rights, the rule of law and good governance are unattractive to the incumbent authorities.”

Overall, the administration’s future actions will presumably focus essentially on avoiding internal and external threats to regime stability, as well as possible threats to the oligarchy’s economic interests. That is likely to be President Sargsyan’s personal goal as well, keeping in mind that the final transition from a presidential to a parliamentary system will be completed in spring 2018.