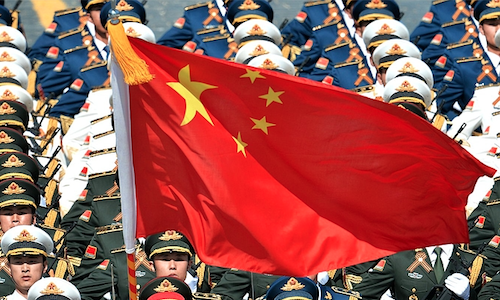 BACKGROUND: Aside from the recent exercises with Tajikistan, General Fang Fenghui, Chief of Staff of the PLA, also announced plans during a March visit to Kabul to set up an anti-terror regional alliance with Pakistan, Afghanistan, and Tajikistan. President Ashraf Ghani of Afghanistan reportedly endorsed this proposal.

How can we explain China’s moves and their implications? Four motives, in particular, to China’s recent military moves appear to stand out. First, the continuing rise of Chinese power in general, and in particular the aggressively nationalist foreign policy program of Xi Jinping’s government, underlies all of China’s activities. Second, one of the grandest designs of that policy is China’s Go West policy. Expressed in the One Belt, One Road (OBOR) policy, now renamed the Belt Road Initiative, China has undertaken a vast economic-political project to bind Central and South Asia, including Pakistan, to its geopolitical agenda. Because China is investing hundreds of billions of dollars in the area, it is increasingly concerned about the safety of its investments and geostrategic influence in Central Asia. Analysts tend to agree that these two motives are involved in shaping Chinese policy calculations about Central Asia.

Yet beyond advancing Chinese power and protecting foreign investments, at least two additional factors are evidently at play. At home, the Chinese government remains concerned over the continuing signs of unrest in Xinjiang among the Uyghur population. Coinciding with the exercises in Tajikistan, Beijing has ordered all residents of Xinjiang to surrender their passports in order “to maintain social order” and prevent people, especially young men, from moving abroad to participate in terrorist movements like ISIS or the Taliban. This move effectively makes Xinjiang residents serfs who are bound to the land, and bespeaks the regime’s ongoing failure to deal with its own domestic Muslim issues. It is therefore natural that the regime resorts to ever more repressive means to prevent the insurgency in Xinjiang from further linking up with the enduring violence in Afghanistan and Syria, which has previously seen participation of Uyghurs.

The second motive may be China’s concerns about Afghanistan and even Russia’s role there. Recent accounts in the U.S. press show that the Afghan government has made little or no progress in reestablishing control by its own means over the country and that the Taliban is probably advancing, not retreating. Second, on December 2, General John Nicholson, the Commander of U.S. and allied forces in Afghanistan, publicly accused Pakistan of supporting the Taliban; and Russia and Iran of legitimizing the movement. In particular, he accused Moscow of competing with NATO in Afghanistan.

Russia has already admitted publicly its intelligence exchanges with the Taliban, suggesting that Russia on the one hand is pledging its support to NATO and Central Asian states against Taliban-inspired terrorism, and on the other supporting the Taliban against allied interests. Analysts and officials in Beijing, who no doubt are seeing the same evidence, must then question Russia’s willingness and capability to provide security in Central Asia in defense of Chinese investments there. Clearly Pakistan and Iran are also unreliable despite whatever benefits their closeness to Beijing offers China on other issues. Under the circumstances the temptation to “do it yourself” and have the PLA defend Chinese interests in these states rather than rely on unreliable local governments becomes much stronger.

IMPLICATIONS: The consequences of what appears to be a creeping Chinese military involvement in Central Asia are many and important. At home it suggests that the Chinese leadership, like many governments before it that cannot deal with internal challenges to its rule, is looking to internationalize its domestic security problems and overcome them by projecting military and other forms of power abroad. Yet for over thirty years it has signally failed to arrest or block the growth of Uyghur unrest and ethno-national or religious sentiment. There is little reason to believe that a more aggressive military policy in Central Asia will offer the government in Beijing a respite from its domestic security dilemmas.

Second, one has to wonder just how much Chinese power is able to induce Iran and even more importantly Pakistan to support China in its strategic interests. If China cannot get Pakistan to stop supporting terrorism throughout the Islamic world despite its huge dependence on China, what does that say about the relationship between China and Pakistan? And the same question can apply with even more force to Iran, which is much less dependent on China for support.

Third, if in fact Moscow is playing a double game in Afghanistan and Central Asia that negatively affects China’s interests, this would seriously undermine the “division of labor” between China and Russia regarding Central Asia that analysts have hitherto discerned. China, with Russian acquiescence, had become the leading foreign economic power in the region but has repeatedly stated its disinterest in projecting military power into Central Asia. This supposedly fostered the global alliance of Russia and China and allowed them to cooperate on regional issues in Central Asia without impinging on each other’s vital interests. If China has now decided, however cautiously, to upend that division of labor, possibly because it cannot rely on Russian policy or for other reasons, can it sustain its relationship of cooperation with Russia in Central Asia? In turn, does the manifestation of Sino-Russian rivalry and tensions in Central Asia affect the larger Sino-Russian relationship? And if so how and where?

Fourth, similar questions affect the Central Asian states. Tajikistan, which has in the past been forced to bow to Chinese pressure for border rectification and investments, may now see its military sovereignty compromised and it may not be the only state in the region to face greater Chinese pressures. How will these states react to assigns of increased Sino-Russian rivalry where they may well be pressed to choose sides?

And fifth, if China is going to try to eclipse Russia’s security role in Central Asia, how will it react in Central Asia and globally? Given the visibly growing Russian dependence upon China for economic and political support, what happens when signs of Chinese encroachment upon Russian “prerogatives” start to multiply? Does Moscow want to undertake an “agonizing reappraisal” of its total foreign and defense polices due to events in Central Asia? And will it continue to try and play its double game there?

It is too early to discern answers to these questions, yet it is not too early to raise them. As regards Russia, Moscow may have reacted to these developments by the announcement of new exercises recently conducted with Tajikistan and of major new arms sales. Exercises and arms sales have been two of the principal instruments by which Moscow has secured support from Tajikistan and its neighbors, even if the arms sales often amount to subsidized exports of Russian weapons. Of course, it is possible that some secret arrangements exist between Beijing and Moscow regarding exercises with Tajikistan and other Central Asian states. But in view of China’s earlier moves and the well documented signs of friction between Russia and China in Central Asia despite their division of labor, such cooperation is not likely.

CONCLUSIONS: Instead, it seems that China, through these exercises and its earlier calls in 2016 for a security formula for Central and South Asia, is spreading its wings and contemplating a discernible expansion of its power projection capabilities and even responsibilities. That can only occur at the expense of Central Asian states, Russia, and probably India as well. This forces us to ask if China’s already visible economic pull upon Central Asian states will be supplemented by their military dependence on China, despite their desires to avoid it or at least avoid Chinese efforts to impose such dependence? To be sure, China has established itself in Central Asia for years to come, but would a Chinese move to upgrade its powers and obligations in the region be met with equal and opposing countermoves from other powers who also have important equities and interests there? Given the nature of contemporary international relations, the answer to that question is almost certainly yes. In other words, a new chapter of the contemporary great game in Central Asia is underway. And we as analysts if not participants must get ready for it.