Central Asia After Astana: From Integration to Cooperation

After the March 15 meeting of Central Asian leaders in Astana, analyses, news and reports increasingly use words such as “integration” or “new beginning” to describe political developments in Central Asia. Some Russian media have speculated in the beginning of the next phase of separation from Moscow. However, the “consultative meeting” in Astana should be understood in a completely different manner. The word “integration” reminds us of previous, less successful attempts at regional cooperation in Central Eurasia and so far, no comprehensive integrational concept has materialized. Yet, the Astana meeting was the first of its kind in many years and President Nazarbaev, summing up the results, underlined its informal character and even compared the format to the Visegrad group in Central Europe. 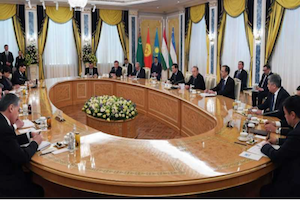 BACKGROUND: Central Asian cooperation and, eventually, integration was a topic for discussion even before the final dissolution of the USSR. Cooperation seemed logical as all five republics had much in common, and struggled to solve similar socioeconomic as well as political problems. However, soon after the USSR ended, the state- and nation-building ambitions of the Central Asian states and their generally competitive relations prevailed over the cooperation strategy. Several attempts to establish a purely Central Asian integrational organization failed due to high expectations of their outcomes and the unwillingness of local leaders to follow the formally agreed rules. The personal rivalries of local leaders made deeper all-regional cooperation impossible, while the interference of other powers (especially Russia and China) and the implementation of their own integration projects (CSTO, EEC, SCO, etc.) absorbed the remnants of Central Asia’s integration potential.

Recent shifts in Central Asian geopolitics as well as the region’s internal affairs have opened a new opportunity for regional talks. From a geopolitical perspective, Central Asia has turned from being the object of a mythical “New Great Game” between Russia, China and the U.S. for global and regional dominance, to a geopolitically peripheral region (except for China). The U.S. has shifted its priorities to internal issues or other regions, with the partial exception of Afghanistan, despite Nazarbaev’s recent successful visit to Washington. Russia’s position in the region has decreased due to its economic weakness and inability to meet the Central Asian elites’ expectations of partnership rather than patronage. Russian foreign policy has also shifted its regional focus, and Central Asia is today much less prominent on Moscow’s agenda than previously. China’s Central Asian policy is primarily determined by its global ambitions; where Central Asia plays the role of a region for transit and raw material supply. At the same time, China’s financial power has raised much concern among Central Asian elites. Despite the region’s secondary role for China, its geographical proximity makes China one of the most important geopolitical players in the region. No other power can balance the increase in Chinese influence. As a result, Central Asian capitals will have to deal with this issue on their own.

IMPLICATIONS: As the region’s geopolitical significance is declining, the states have taken their fate into their hands. In this geopolitical situation, the new enthusiasm for Central Asian cooperation seems to be a logical step forward. The death of Uzbekistan’s President Islam Karimov and the election of Shavkat Mirziyoev became another crucial event in the development of personal contacts among Central Asian elites. Therefore, although Uzbekistan did not host the meeting, the gathering of Central Asian presidents became possible due to the changes in Uzbekistan and the transformation of Uzbekistan’s foreign policy from isolation and hostility towards a more open approach to its neighbors. The current constructive relations between the two main regional powers (Uzbekistan and Kazakhstan) have left little space for outside interference in intraregional matters.

The meeting demonstrates that the most influential countries (Uzbekistan and Kazakhstan) and their smaller counterparts have largely overcome their principal animosities for now. Thus, the breakthrough of the Uzbek president’s visit to Tajikistan on the eve of the Astana summit as well as the markedly improved relations with Kyrgyzstan paved the way for cooperation in the future. This new approach obviously does not exclude tensions over a whole range of problematic issues – unresolved border issues, water management, environmental affairs, migration, and many others. However, there is a clear tendency to solve problems through mutual contacts between leaders rather than threatening statements and the involvement of external powers for mediation.

Turkmenistan’s President Gurbanguly Berdimuhammedov was the only head of state not to attend the Astana meeting due to his simultaneous Gulf States tour. Instead, the Speaker of the Turkmen Parliament Akja Nurberdiýeva, the country’s second person in rank, led the Turkmen delegation. However, the most interesting meeting, between Nazarbaev and Serdar Berdimuhammedov, went mostly unnoticed. The son of the Turkmen President was reelected as a member of Turkmenistan’s parliament in March 2018, although he did not become the head of parliament as was generally expected. The meeting in Astana and the position of Serdar as the de facto head of the Turkmen delegation indicates the introduction of Berdimuhammedov’s eventual successor on the international stage, although very preliminary and unofficial. However, this says little about the interest of the Turkmen president and his elite in future deeper cooperation with Central Asian states.

It is premature to assert that the Astana meeting laid the foundation for a new tradition of informal meetings and talks about cooperation between Central Asian presidents. However, the meeting suggests that such a format is more suitable for Central Asian leaders than seeking an integration scheme with the establishment of supranational structures. Regular informal meetings could prevent a relapse into previous animosities and, most importantly, the leaders showed a willingness to meet and speak.

In this sense, the Visegrad Group mentioned by president Nazarbaev would be exactly the format that Central Asia needs. It has positioned itself as non-institutionalized group of four states organizing regular gatherings of presidents and governmental as well as non-governmental representatives. Other groups, such as the Baltic Assembly, the Nordic Council or even ASEAN, have much more formalized structures and therefore represent instances of supranational integration that may be a step too far for the Central Asian states.

When comparing these regional groupings, geographical, political, demographic, economic and cultural differences must be taken into consideration. The mostly presidential systems of Central Asia primarily stimulate a top-down approach to cooperation instead of bottom-up initiatives based on cooperation in the civic sphere, as is the case in the Visegrad group. Given that the level of regional cooperation is highly dependent on the personal relations between Central Asian leaders, the cordial atmosphere of the Astana summit and the willingness to cooperate invites an optimistic perspective for Central Asia. Moreover, practical bilateral and multilateral steps have accompanied political statements, including the abolishment of visas, a joint program on tourism and other initiatives. This  was not the case during previous attempts at cooperation.

CONCLUSIONS: The style and format of the summit represented real and much needed progress in the region after years of confrontation. The participants did not pompously present the summit as a breaking moment in Central Asian integration as in the past. In addition, the absence of outside powers brings hope that the Central Asian states have found an avenue for making their own decisions on regional affairs. This motivates cautious optimism for a more realistic foundation of regional cooperation.

Despite the above-mentioned distinctions between Central Asia and Central Europe, the Visegrad group’s relatively open character of cooperation without unrealistic integrational ambitions could be a stimulating factor for Central Asian leaders. Hopefully, the friendly atmosphere of the Astana meeting, leaving serious personal animosities aside, represents a fresh start for regional cooperation.

AUTHOR’S BIO: Slavomir Horak is Assistant Professor at the Department of Russian and East European Studies, Charles University in Prague. He is currently based in Tbilisi, Georgia.